The store will not work correctly in the case when cookies are disabled.
By Various
Cambridge   For the Hakluyt Society at the University Press
9" by 6" xxvii, 421pp; lvii, 333pp; cxx, 1-163pp; x, 164-475pp; xvi, 332pp; xxviii, 1-247pp;viii, 249-524pp
A fascinating collection of varied works from the Second Series of Hakluyt Society publications, bound in the publisher's iconic bright blue cloth binding, with original dustwrappers.
By Various 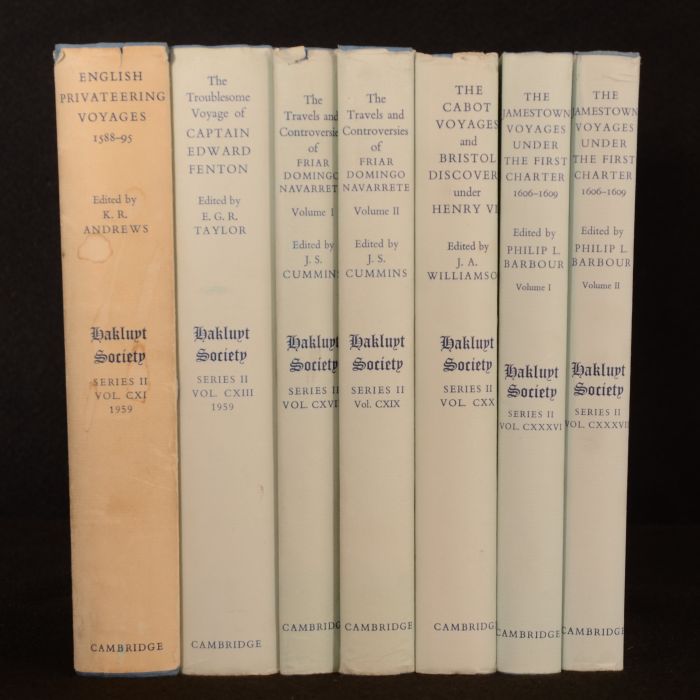 The Hakluyt Society is a text publication society, founded in 1846. Named after Richard Hakluyt, the renowned collector and editor of narratives of voyages and travels, the society seeks to advance knowledge and education by the publication of scholarly editions of primary records of voyages, travels and other geographical material. Series II: Vol. CXI details twenty-five English voyages to the West Indies between 1588 and 1595, with numerous documents summarized entirely or in part and edited by Kenneth R. Andrews. The Introduction also gives a fascinating account of privateering during the Spanish war and in the West Indies. Collated, complete with four black and white plates, and five maps, one of which is folding. Series II: Vol. CXIII contains the first full account of the voyage of Edward Fenton, who set out in 1582 on a voyage intended to outdo the famous exploits of Drake. However, the failure of the venture left Fenton and his attempt to fade into oblivion, until now. In this world Taylor assembles all surviving records to reconstruct the preparation, execution, and aftermath of the voyage. Collated complete with fifteen black and white plates. Series II: Vol. CXVIII and Vol. CXIX contain a fascinating collection of travel works by of Friar Domingo Navarrete, edited from manuscripts and other printed sources by J. S. Cummins. Domingo Fernández Navarret was a Dominican missionary who travelled around the world but spent most of his life in China. This volume explores his extensive writings but largely focuses on his 'Tratados Historicos', an intriguing work that provides a detailed account of his travels in Mexico, the Philippines, Macoa, China, India and Macassar. Collated, complete with seven black and white plates and three sketch maps to volume I, and eleven plates to volume II (two of which are folding) and three sketch maps (one of which is folding). Series II: Vol. CXX contains fascinating documents from English, Portuguese, and Spanish archives relating to the Atlantic voyages out of Bristol between 1480 and 1508-9. Collated, complete with fourteen plates (four of which are folding) and five sketch maps (one of which is folding). Series Vol CXXXVI and Vol. CXXXVII contain all the known documents relating to the Jamestown voyages under the first charter of 1606 to 1609, annotated and translated by Philip L. Barbour. The introduction of this work also provides a fascinating review of early sources, such as the early history of the colony written by emigrants, and also gives a fascinating contemporary picture of the first few years of the colony out of which the United States grew. Collated, complete with two plates and three maps (one of which is folding) to volume I, and three maps to volume II (one of which is folding).