The store will not work correctly in the case when cookies are disabled.
By Various
New York   Stanley D Woodard
12" by 9.5" 235pp
A very scarce magazine produced by students of New York University's 'Floating University' regarding the first University World Cruise, the places they visited and the experiences held.
By Various 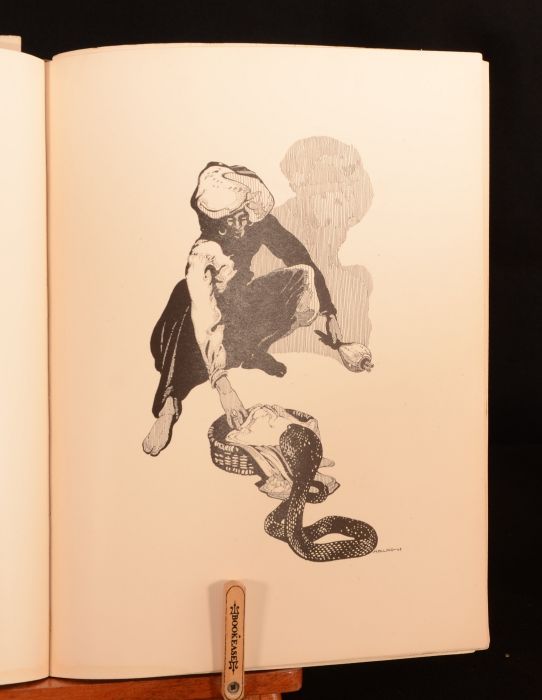 This work describes itself as being the story of the 'Ryndam and the First Annual College Cruise around the world'. To the preface it is noted that this annual is not a 'travel book, an annual or even a complete history of the first World Cruise; but rather an impression of the Cruise as seen by some of the students, so that those who took part may live again the experiences of the trip'. The University World cruise was an idea founded by James E Lough, the Dean of New York University. His idea of the 'floating university' or 'university afloat' was to take students around to world to shape them and their education. There is a curriculum for the students to learn whilst traveling, which is complemented by the locations they visit and people they meet on the way. This work has a fascinating introduction by Lough who explains his inception of this idea and its expansion. A handful of the countries mentioned in this work are Cuba, Hawaii, Japan, China, The Philippines, Egypt, Italy, Arabia, Malta, Algeria, Great Britain and France. Adorned with many illustrations of photographs and drawings by the students on their journey. There are photographs to the rear of students who were on the World Cruise, and a prior owner has annotated them with names of the individuals. With prior owner's neat inscription to the recto of front endpaper, Goodwin Stoddard, an individual who was on this trip according the the student list to the rear. Collated, lacking pages 47-48, 57-58, 77-80, 113-114, 127-130, 141-142, 177-178. A fascinating work.

In a half leatherette binding. Lacking the leatherette to the front board, severe loss to the leatherette at spine and lacking portions of leatherette to the rear board. Externally, worn, to the head and tail of spine and extremities. Split to the spine which affects binding. Prior owner's inscription to the recto of front endpaper, Goodwin Stoddard. Chipping to the front board and to the endpapers at edges. Internally, binding has failed at several points, with gatherings loosening and some leaves having been removed. Several removed leaves are loosely inserted, others are lacking. Pages lacking are 47-48, 57-58, 77-80, 113-114, 127-130, 141-142, 177-178. Pages are generally bright. Just the occasional spot. Small tidemarks to the bottom edge and bottom margin of pages, relatively light and not affecting the text. Prior owner has annotated the photographs to the rear of the work with the names of individuals. Prior owner has also annotated the students list and contact details to the rear of the work.