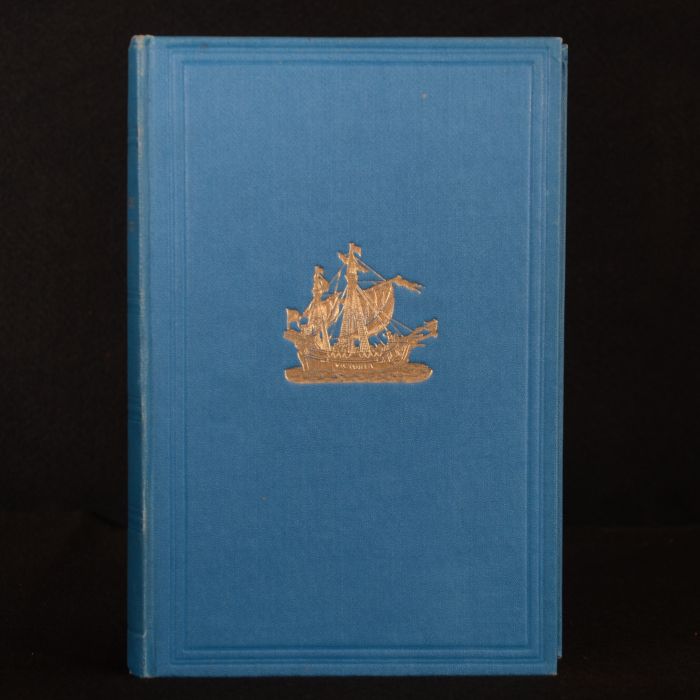 The Hakluyt Society is a text publication society, founded in 1846. Named after Richard Hakluyt, the renowned collector and editor of narratives of voyages and travels, the society seeks to advance knowledge and education by the publication of scholarly editions of primary records of voyages, travels and other geographical material. With the following pagination: lxxvii, 176pp, 40pp publisher's adverts; xii, 212pp, xxxvi publisher's adverts; li [1pp]132pp, xlii publisher's adverts; lxx, 164pp; 192pp, lxviii; xciii, 314pp; lxiii, 1-223pp; xi [1pp]; 224-554pp; xxxiv [1pp] 1-496pp; vi, 497-1004pp. Series II: No XIII 'The Voyage of Captain Don Felipe Gonzalez' is in a signed Leighton Son and Hodge binding, transcribed, translated, and edited by Bolton Glanvill Corney. This work also contains an extract from Mynheer Jacob Roggeveen's 'Official Log of his Discovery and Visit to Easter Island in 1722'. Collated, complete with two illustrated plates, and three folding maps enclosed in the pocket to the rear pastedown of the volume. Series II: No. XXXI is in a signed Leighton Son and Hodge binding, and contains Pedro de Cieza de León's fascinating account of 'The War of Quito' and 'Inca Documents', translated and edited by Sir Clements R. Markham. Pedro Cieza de León was a renowned Spanish conquistador and chronicler of Peru. Whilst best known for his history and description of Peru, 'Crónicas del Perú', only the first section of this work was published during his lifetime. The remaining three sections were only published in the nineteenth and twentieth centuries. Series II: No. XLVIII contains Fernando Montesinos' 'Memorias Antiguas Historiales del Peru' translated and edited by Philip Ainsworth Means, with an introduction by Sir Clements R. Markham. Collated, complete with ten illustrated plates. Series II: No. LXXIV contains the contemporary translation of Peter Floris's journal on board the 'Globe', edited by W. H. Moreland. This work also contains a fascinating introduction recounting the personality of Floris, and the objects of his voyage.Collated, complete with three coloured maps, one of which is folding. Series II: No. XCIII is a fascinating volume issued to commemorate the centenary of the Hakluyt Society, detailing the fascinating history of the society and various chapters on Richard Hakluyt, English collections of travel writings, the history and future of the society, and much more. This volume also contains a list of publications, members, the Laws of the Hakluyt Society, and an 'Index to the Society's publications, 1847-1946'. Collated complete with eighth black and white plates, and one in-text illustration. Series II: No. XCIX contains fascinating documents from the archives of the Indies at Seville, illustrating English voyages to the Caribbean, the Spanish Main, Florida, and Virginia, that have been translated and edited by Irene A. Wright. Collated, complete with four folding plates, and four maps, three of which are folding. Series II: No. CI and Series II: No. CII contain the fascinating collection of Sir John Mandeville's texts in an English translation, compiled and edited by Malcolm Letts. Sir John Mandeville is the supposed author of the renowned travel work 'The Travels of Sir John Mandeville' that was first circulated between 1357 and 1371. The earliest surviving text is in French, but underment a number of translations into many other languages, leading the work to become incredibly popular and widely read. Complete in two volumes, with volume I containing the 'Egerton Text', and volume II containing the 'Paris text', the 'Bodleian' text, and extracts from other versions. Collated, complete with one coloured frontispiece plate, a two maps (one of which is folding) to volume I, and three black and white plates to volume II. Series II: No. CIV and Series II: No. CV contain fascinating documents illustrating the English voyages to North America from 1584 to 1590 under the auspices of Sir Walter Raleigh, edited by David Beers Quinn. Whilst these voyages are often eclipsed by the renowned voyages of Drake and Cavendish, within this work Quinn argues that these voyages were significant episodes in war between Elizabethan England and Spain. Collated complete with three plates and six maps (two of which are folding) to volume I, and one plate and one map to volume II, with a folding map enclosed in the pocket to the rear pastedown of the volume.

In the uniform publisher's original cloth binding with gilt vignette to the front boards. Externally, excellent with minor shelfwear to extremities. Slight bumping to head and tail of spines, and small patches of rubbing to joints. Slight fading to the odd spine. Library bookplates to front pastedown, and library blind stamp to half title page, frontispiece and title page, No. XIII. Ink stamp to front pastedown, No. XLVIII. Label tipped to front pastedown No. LXXIV. Offsetting to endpapers of the occasional volume. Internally firmly bound. Pages very bright and clean throughout. Light scattered spotting to first few pages No. XLVIII, CIV, and CV. Scattered spots to first and last few pages, and fore edge of pages (largely only visible to text block) No. XCIX. Small closed tears and slight chipping to rear endpapers, No. XIII. Bookbinders label tipped to rear pastedown of No XIII and XXXI. Small ink mark to page 132 No. XLVIII, offset to facing page. Occasional small ink mark to No. XCIII, not affecting text. Ink inscription to front pastedown, dated 24.11.53'. Pages occasionally uncut throughout.