The store will not work correctly in the case when cookies are disabled.
By Isaac I. Hayes
London   Richard Bentley
7" by 5" xliii, 379pp
Isaac Israel Hayes's fascinating account of the 'Second Grinnell Expedition' of 1853–1855, led by Elisha Kane to search for Franklin's lost expedition.
By Isaac I. Hayes 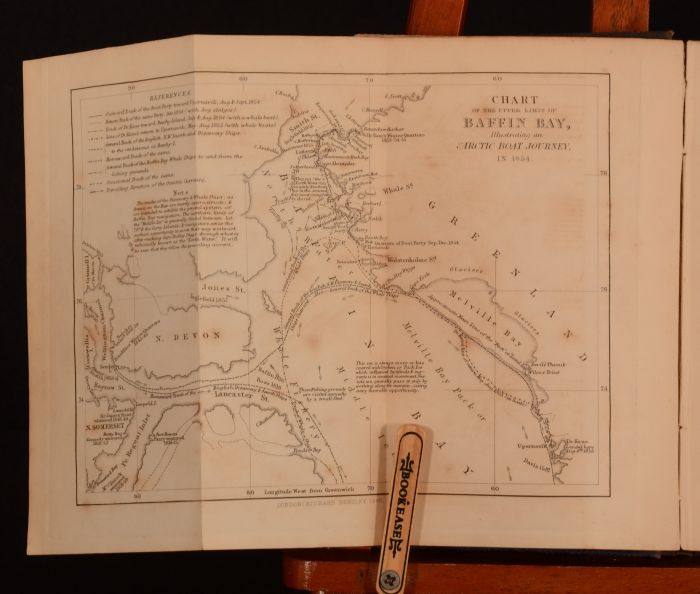 Isaac Israel Hayes was an American Arctic explorer, physician, and politician who signed on as ship's surgeon for the 'Second Grinnell Expedition'. Financed by Henry Grinnell, the purpose of the expedition was to determine the fate of Sir John Franklin and his fellow explorers, but no evidence of the men was found. However, the expedition set a new record for northward penetration, and discovered the long-sought open Polar Sea. While three members of the crew were lost, the epic journey of the survivors inspired the public as a vivid tale of Arctic survival. Containing a folding chart of 'The Upper Limit of Baffin Bay, Illustrating an Arctic Boat Journey in 1854'. With an Introduction and Notes by Dr. Norton Shaw.

In the publisher's original cloth binding. Externally, slightly bumped to extremities. Bumping to head and tail of spine resulting in small splits to cloth. Fading to spine. Rear joint slightly rubbed, with cloth to front joints split, but relatively firm. Front hinge split and strained, but reasonably firm. Prior owner's ink inscription and tipped in bookplate to the front pastedown. Internally firmly bound. Pages slightly age toned, but bright and clean, with the odd spot to the occasional page.