The store will not work correctly in the case when cookies are disabled.
By John Aiton
London   A Fullarton and Co
9" by 6" xii, 552pp
A beautifully illustrated travelogue of John Aiton's visits to several holy locations. With plates from drawings by Turner, Roberts, Harding and more. The third edition of this work.
By John Aiton

London   A Fullarton and Co
9" by 6" xii, 552pp
A beautifully illustrated travelogue of John Aiton's visits to several holy locations. With plates from drawings by Turner, Roberts, Harding and more. The third edition of this work.
£95.00
: 0.75kgs / : 620L21
Add to Wish List 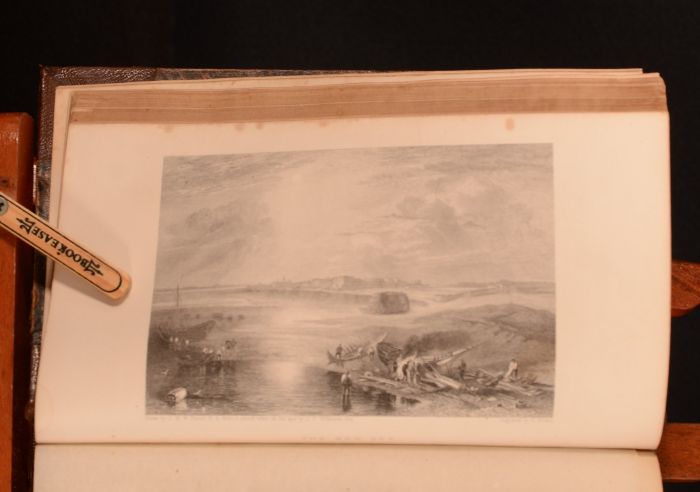 In a half calf binding. This work details Aiton's travels in Egypt seeing the pyramids, desert and Nile as well as to Jerusalem, Bethlehem, Jericho, Gailee, Greece, Rome and more. Engravings by Finden. With a frontispiece by C Stanfield from a drawing by C Barry and a vignette title page by Harding after a sketch by Capt D Roberts. A further fourteen plates (including one map) with drawings from several eminent figures such as J M W Turner after sketches by others. The list is as follows: C Stanfield after Genr Sir Sam Hawker, J M W Turner after C Barry, J M W Turner after J C Wilkinson, J M W Turner after Sir Archibald Edmonstone, D Roberts after Rev R Master, A W Calcott after Sir A Edmonstone and A Allen, C Stanfield after W E Fitzmaurice, J D Harding after Las Casas, W Brockedon after Rev Arundel, E T Parris after Capt Roberts, J D Harding after K Cockerell, J D Harding after W Page, C Stanfield after Capt Roberts. John Aiton was a Scottish religious writer. He wrote several travel works in addition to other religious tracts. Titles of his other works include 'Eight weeks in Germany', 'The Drying-Up of the Euphrates' and 'A Refutation of Mr Robert Owen's Objections to Christianity'. The third edition of this fascinating and beautifully illustrated travelogue.

In a half morocco binding with cloth covered boards. Externally, generally smart with patches of light rubbing to the extremities and to the joints. Patches of heavier rubbing to the boards. Front endpaper has been removed, possibly due to prior owner's inscription which has offset to the verso of front endpaper. Internally, firmly bound. Pages are generally bright with just the odd spots.