1824 The Adventures of Hajji Baba of Isphan 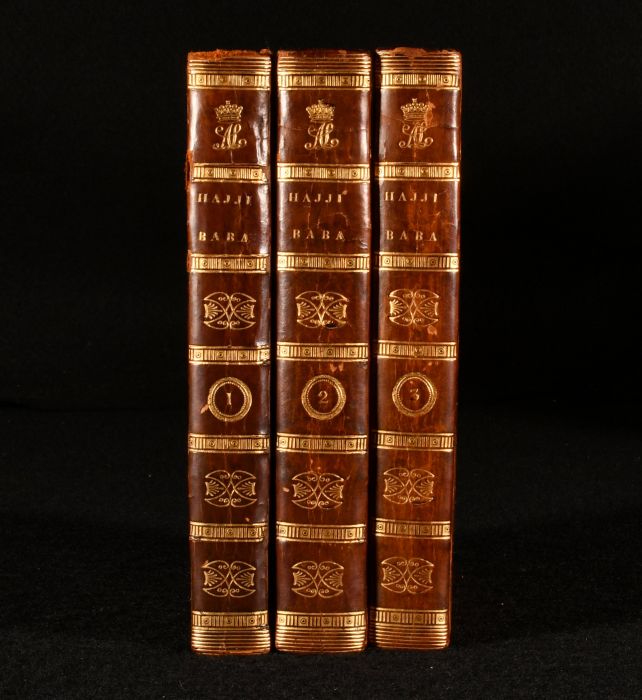 With the bookplate of Hugh Cecil Lowther, 5th Earl of Lonsdale to the front pastedowns. These books previously belonged to his mother, Lady Augusta Mary Lowther. With her inscription to the head of the title pages. A second bookplate to the front pastedowns of Mildred Bliss. Bliss was a co-founder of the Dumbarton Oaks research library in Washington DC. She was an art collector, philanthropist and an important social figure of the twentieth century. James Justinian Morier was a renowned British diplomat and author who entered the diplomatic service through the influence of his uncle, Admiral William Waldegrave,1st Baron Radstock. First visiting Iran in 1808 as secretary to Sir Harford Jones-Brydges, Morier had an extensive career in the country, and wrote several travel works of his experiences that were widely popular. This picaresque romance of Persian life was written after Morier retired from his diplomatic career in Iran. The work drew heavily on Morier's personal knowledge of Persia and its people that he had acquired on the British embassy staff at Tehran. The novel hence widely influenced English ideas of Persia, and its Persian translation even led to the development of the modern Persian novel of social criticism. Complete in three volumes. This work was published anonymously. This set is in a handsome half calf binding with marbled paper boards. An important and uncommon work, especially in such a good condition.

In half calf bindings, with paper covered boards. Rebacked. Externally, generally smart with light rubbing to the joints and to the extremities. Head of front joints are slightly cracked, but the hinges remain firm. Bookplates to the front pastedowns. Prior owner's inscription to the title pages. Internally, firmly bound. Pages are bright and clean.