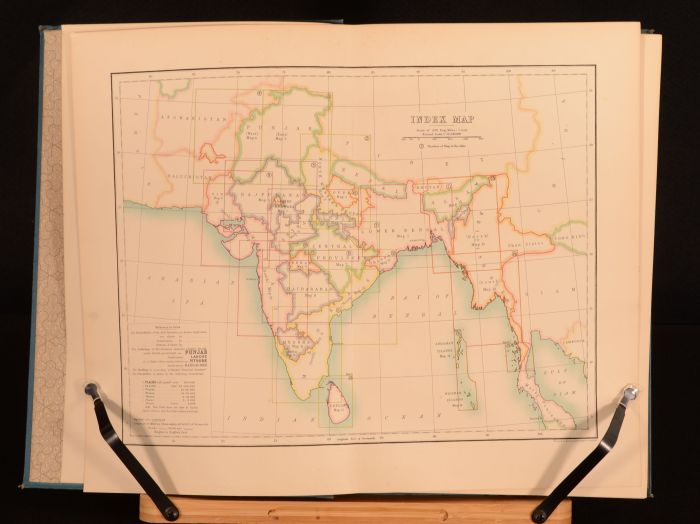 The first edition of this work. A very scarce work. in excellent condition and complete. With a colour folding map to the frontispiece, and fifteen colour folding maps. With two pages of publisher's adverts to the rear. Collated, complete. A collection of maps of India, being an atlas showing Lower Bengal, North-West Provinces, Oudh, and Nepal, East Punjab and Kashmir, West Punjab, British Baluchistan, and North-Western Frontier, Rajputana and Ajmer-Merwara, Central India, Central Provinces, Hyderabad and Berar, North Bombay and Baroda, South Bombay, South Madra, Mysore and Coorg, North Madras, South Orissa, and Ceylon, North British Burma, Assam and Manipur, South British Burma, Andaman, Nicobar Islands, and plans of Calcutta, Madras, and Bombay. An attractive look at the state of India in the late nineteenth century, when it was still under British rule. An interesting comparison to modern day India. With an introduction by William Wilson Hunter, a Scottish Historian, a member of the Indian Civil Service. He is best known for 'The Imperial Gazetteer of India', a gazetteer of the British Indian Empire. Published by W. & A. K. Johnston, which was one of the major map publishers in the nineteenth century. The firm was founded in 1826 by brothers William Johnston and Alexander Keith Johnston. Prior owner's ink inscription to the recto to the front endpaper. A very scared first edition of this colourful atlas.

In the original publisher's cloth binding. Externally, generally smart. Marks to the boards. A little discolouration to the spine. Minor bumping to the head and tail of the spine and to the extremities. Prior owner's ink inscription to the recto to the front endpaper. Internally, firmly bound. Pages are bright and clean, with the odd light spot.