The store will not work correctly in the case when cookies are disabled.
By Fred Burnaby
London   Cassell Petter & Galpin
8.5" by 5.5" [5], vi-xviii, [1], 2-487, [5pp]
The first edition of this fascinating account of Frederick Burnaby's amazing journey to Khiva through Russian Asia on horseback. Illustrated with three folding maps.
By Fred Burnaby

1876 A Ride to Khiva: Travels and Adventures in Central Asia 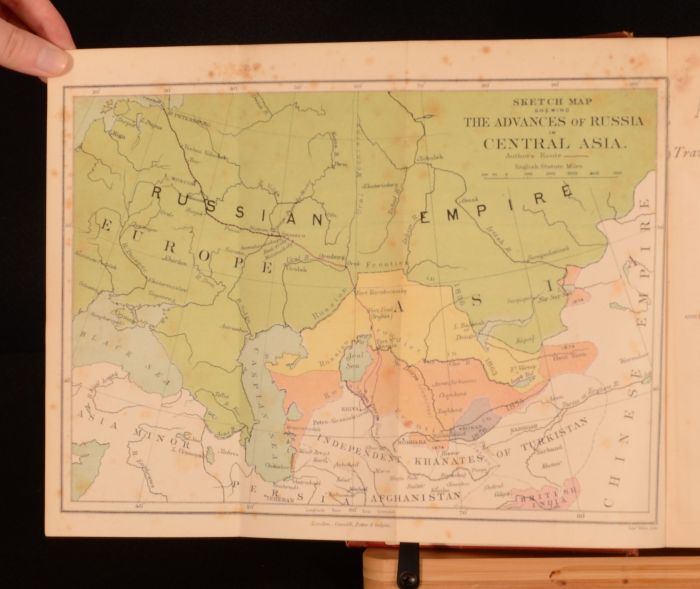 The first edition of this work. Extremely scarce in the first edition and in the publsihers' binding. With a colour folding map to the frontispiece, and two folding maps to pockets to the front and rear. With four pages of publisher's adverts to the rear. Collated, complete. A travel work on Khiva, a city in Uzbekistan, a landlocked country in Central Asia. In this work Burnaby documents his journey on horseback from Russian Asia to the Khanate of Khiva, at a time when war had broken out between the Russian army and the Turcoman tribesmen. He departed from London Victoria in November 1875, and he accomplished his journey through the winter. He caught frostbite during the extreme winter blizzards, and he took three weeks to recover, being close to death. He evaded the Russian army, and was met by the Khan of Kokan's noblemen. His work outlined the details of the meetings once he arrived in Khiva. He gained respect from the population Burnaby returned back to England in March 1876. When this work was published, it brought the author instant fame for its popularity. His fame also rose in the social circles in London, due to reports in newspapers and magazines. Written by Frederick Burnaby, a British Army intelligence officer, who was known for his swashbuckling courage and adventurous spirit. Prior owner's ink inscription to the recto to the front endpaper. The first edition of this travelogue, illustrated with three folding maps.

In the original publisher's cloth binding. Externally, generally smart. Bumping to the head and tail of the spine and to the extremities, resulting in some loss to the head and tail of the spine. Light marks to the boards. Minor discolouration to the spine. Front hinge is starting but firm. Prior owner's ink inscription to the recto to the front endpaper. Internally, firmly bound. Pages are bright with the odd spot, heavier to the first and last few pages. Folding maps to the front and rear are a little spotted with some age-toning, and small closed tears to the folds.