1845 Sketches on the Shores of the Caspian, Descriptive and Pictorial 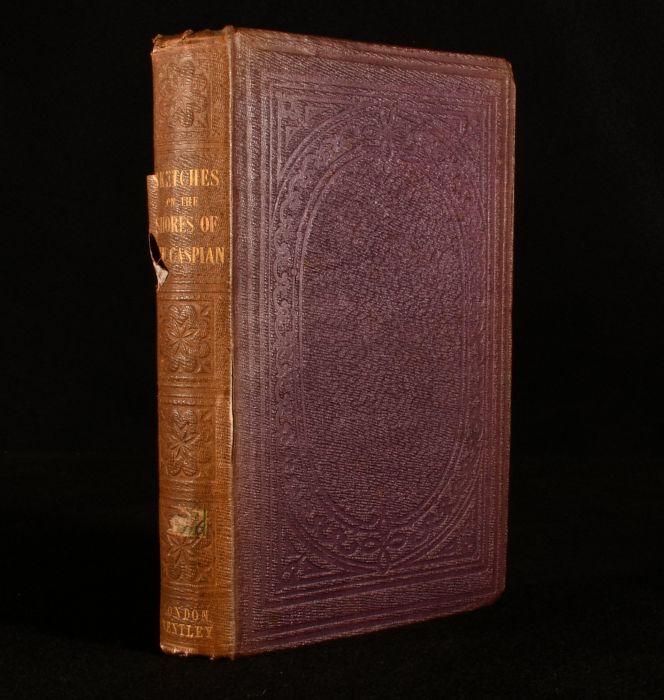 The first edition of this work. A very scarce work. Illustrated with a tinted lithograph frontispiece, three tinted lithograph plates, and four in-text woodcut engravings. Collated, complete. This is the author's only known work. A fascinating and detailed travel work, looking in the Caspian Sea and the shores of the sea, and Persia. This is one of the most important travel accounts of Persia, published after Jonas Hanway's 1753 work. Travel works on Persia were very rare at this time, and were highly sort after. For the work, Holmes spent six months touring Persia. Holmes was related to James Brant, who was the British Consul at Erzerum. Holmes stayed with Brant whilst he was researching this work. Brant also led the expedition around Persia. The work is incredibly detailed, narrating his travels and the lives of Persians and Russians, as well as the numerous religious tribes he encountered. Holmes was young when on his journey, only twenty-three when this work was published. It is an intimate travel work, and is written in a lovely accessible style that doesn't hold back on description. Written by William Richard Holmes, who the British Consulate in Turkey, Samsoon, and Bosnia. He was knighted in 1877 for his services to the crown. Stamp to the recto to the front endpaper, 'C. Barlington', and to the head of the 'illustrations' page.

In the original publisher's cloth binding. Externally, generally smart. Cloth is lifting to the joints a little. Minor bumping to the head and tail of the spine and to the extremities. Minor fading to the spine. Evidence of a label being formerly adhered to the tail of the spine. Very small amount of loss to the head of the spine. A few light marks to the boards. Evidence of labels being formerly adhered to the pastedowns. Stamp to the recto to the front endpaper. Internally, generally firmly bound. Pages are bright and generally clean with the odd mark and odd spot, spots heavier to the first and last few pages. Prior owner's stamp to the head of the 'illustrations' page. Pages 131-142 are lifting and fragile in the binding.