The store will not work correctly in the case when cookies are disabled.
By Ansel F. Hall
New York and London   G. P. Putnam's Sons
7.5" by 4.5" [4], v-xiii, [1], 347pp
The first edition of the first comprehensive guide to the Yosemite National Park in California, edited by the Park Naturalist, Ansel Franklin Hall. Illustrated with plates and a folding map.
By Ansel F. Hall 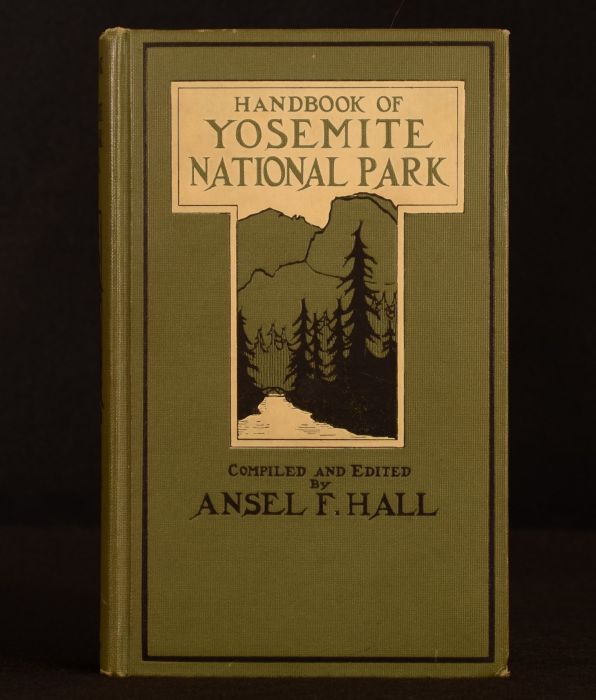 The first edition of this work. Illustrated with a frontispiece, one folding map, and twenty-six plates. Collated, complete. A seminal collection of seventeen articles discussing various aspects of the Yosemite National Park. This work was one of the first comprehensive guides to the Yosemite National Park, and was well known for its extensive and greatly varying information on the National Park. The articles discuss the history of the park, the policy of the National Park Service, the geology of the park, and the birds, mammals, reptiles, fishes, insects, trees, and flowers of the park, and more. Yosemite is in the western Sierra Nevada of California, and is well known for its waterfalls and granite cliffs, as well as for its biological diversity. The park was established as a National Park in 1890. Edited by Ansel Franklin Hall, who was the first Park Naturalist of the park, serving from 1920 to 1923. During this period, he founded the Yosemite Museum Association. His work at Yosemite allowed him to rise to higher ranks, including later working in Mesa Verde National Park. The essays were written by Ralph S. Kuykendall, A. L. Kroeber, Stephen T. Mather, Joseph Grinnell, Edwin C. Van Dyke, and more eminent writers. Prior owner's ink inscription to the recto to the front endpaper, 'Roy & Betty Crawford, Aug 3. 1928 Yosemite Nat Park.' The first edition of this useful guide to the Yosemite National Park.

In the original publisher's cloth binding. Externally, smart. Light bumping to the head and tail of the spine and to the extremities. Prior owner's ink inscription to the recto to the front endpaper. Internally, generally firmly bound. Pages are bright and clean. Folding map with a very small amount of edgewear.