The store will not work correctly in the case when cookies are disabled.
By Max O'Rell
Bristol   J.W. Arrowsmith
7" by 5" iv, 335pp [3pp advertisements]
A charming edition of this travel work by Max O'Rell, copiously illustrated with 'upwards of 130 illustrations' by E.W. Kemble.
By Max O'Rell

1891 A Frenchman in America (The Anglo-Saxon Race Revisited) 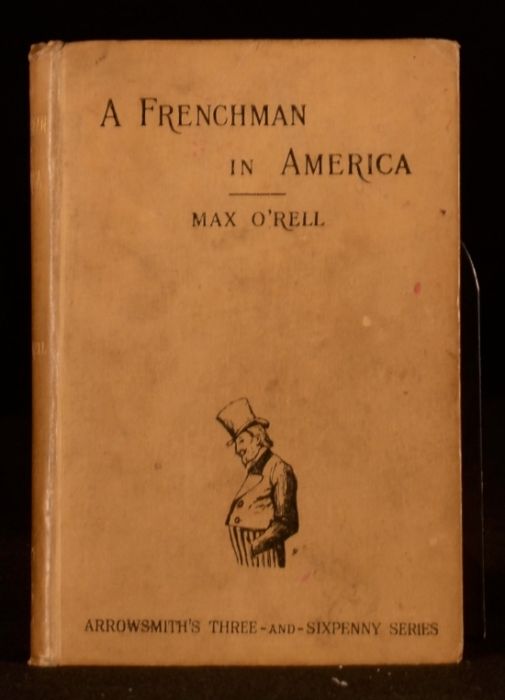 Max O'Rell, the pseudonym of Leon Paul Blouet, was a French author and journalist best known for his works which provided observations and comparisons of Anglo-American and French culture. This text details the incredibly successful author's lecturing tour around the United States, where he was considered the bestselling foreign lecturer of his time. Edward Windsor Kemble, usually cited as E. W. Kemble, was an American illustrator best known for illustrating the first edition of Mark Twain's 'Adventures of Huckleberry Finn'. Kemble, born in Sacramento, California, demonstrated an early artistic talent, becoming a successful contributor to periodicals by 1881 at the age of twenty. Impressed by his youth and considerable talent, the 'New York Daily Graphic' offered him the position as the major political cartoonist for the paper, whilst Kemble receiving his only formal artistic training at the Art Students League of New York. This position quickly led Kemble to contribute to other major publications, such as 'Life magazine', 'Collier's', 'Harper's Weekly' and 'Leslie's Weekly'. It was these lively cartoons, some of the magazine industry's most mature work, that attracted the attention of Mark Twain, who employed Kemble for his most well-known work; the illustrations for 'Adventures of Huckleberry Finn'. This copy features a publisher's advertisement to the front pastedown, as well as three further advertisements to the rear of the text.

In a brown cloth binding. Externally, sound with slight rubbing. Some slight wear to head and tail of spine, as well as marks to boards. Joints starting but firm. Internally, generally fimly bound, though back board is loosening. Pages generally bright and clean.