1835 Journal of a Residence in America 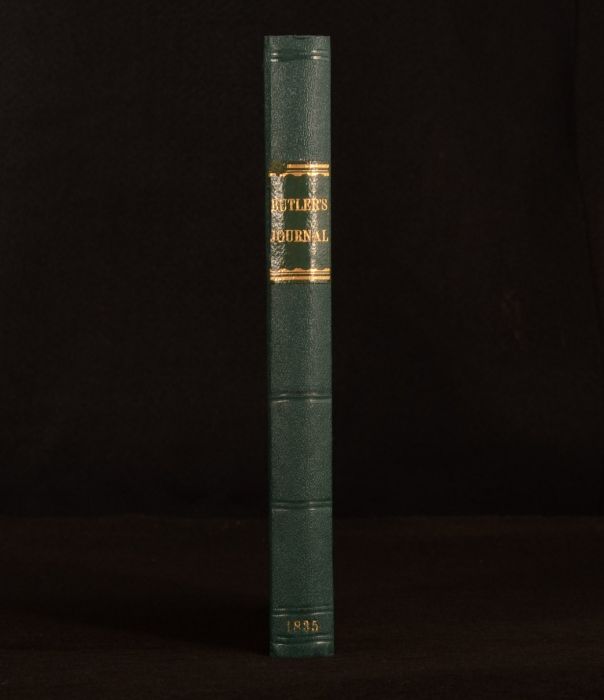 The first edition of this work, being the first edition published in France. Fanny Kemble's journal documenting her time in America. Kemble moved to America after her marriage in 1834 to Pierce Mease Butler, who was an heir to cotton, tobacco, and rice plantations, a fact that Kemble dislike, being an abolitionist. These journals discuss her time on a theatrical tour of the States, when she was accompanied by her father. Kemble was a popular author of her time, as well as being a notable actress, having come from a theatre family, including having Sarah Siddons as her aunt. She first appeared on stage when she was twenty, playing Juliet in an adaption of 'Romeo and Juliet' at the Covent Garden Theatre. She carried on playing Shakespeare roles, as well as playing in Richard Sheridan's 'The School for Scandal'. With a half-title. With two pages of publisher's adverts to the rear. Bookplate to the front pastedown, showing the family crest of Hay of Seggieden, with the motto 'Diligentia Fit Ubertas'. Clan Hay is a Scottish clan which has played an important part in Scottish history and politics. The family descends from the Norman family of de la Haye. They were involved in the Wars of Scottish independence, pledging allegiance to the King and attending parliament at St Andrews. The family suffered heavy casualties in the Battle of Flodden in 1513 during the Anglo-Scottish Wars, and later the family were loyal to Mary Queen of Scots and Catholicism. One of the Hay descendants was involved in a conspiracy with King Philip II of Spain to overthrow Queen Elizabeth. During the English Civil War, a Hay descendant led Royalist forces against the Covenanters, and he was later executed for being in support of Charles I. Seggieden house was in Perthshire. Prior owner's ink inscription to the half-title, 'Maria St....', the surname being illegible. An interesting travel journal accounting Fanny Kemble's live in America.

Rebound in a half cloth binding with marbled paper to the boards. Externally, smart. A little rubbing to the boards. A very small amount of loss to the spine label.Bookplate to the front pastedown. Bookseller's label to the front pastedown. Internally, firmly bound. Pages are lightly age-toned and clean. Prior owner's ink inscription to the half-title.