The store will not work correctly in the case when cookies are disabled.
By Rene Caillie
Paris   Imprime par Autorisation du Roi a l'Imprimerie Royale
8.5" by 5.5" [7], iv-xii, [1], 2-475; [5], 2-426; [3], 2-404pp
The first edition of Rene Caillie's influential travel work, documenting his experiences travelling to Timbuktu, and being the first European to leave the city alive.
By Rene Caillie 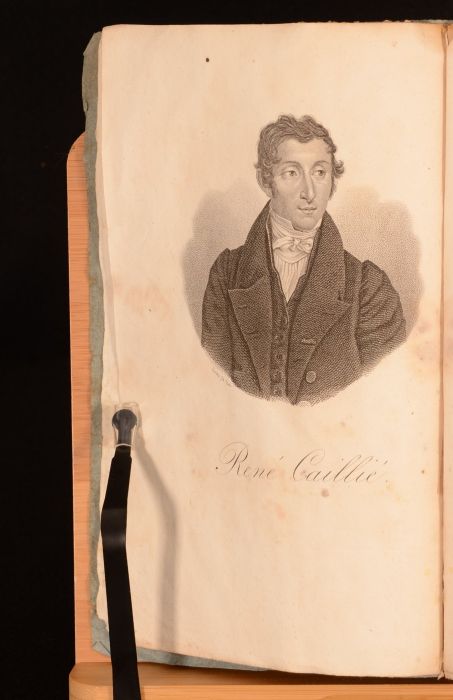 The first edition of this work. In the original French. Volumes II and III with the original wraps bound in. With a frontispiece to Volume I. The signatures for Volume I run as a6, 1-29(8), 30(4), 31(2). The signatures for Volume II run as 1-26(8), 27(4), 28(1). The signatures for Volume III run as 1-25(8), 26(2). Collated, bound without the folding maps and plated, and lacking accompanying atlas. A fascinating travel work. This work documents Rene Caillie's experiences travelling in South Africa. The work notes his time in the town Timbuktu, and he was the first European to return alive from the town. He started his journey on the nineteenth April 1827, starting from Kakondy near Boke on he Rio Nunez. He travelled east along the hills of Fouta Djallon, and crossed the Upper Niger at Kouroussa, which was then Kurussa. He travelled to Kankan and stayed there for a month, before heading east towards Minignan. However he was detained for five months in Tieme due to illness, and resumed his journey again in January 1828. He travelled further, and arrived in Timbuktu on the 20th April 1828, where he then spent a fortnight. Caille was able to enter the city as he was disguised as a Muslim. There was a British officer, Major Gordon Laing, who preceded Caillie to Timbuktu in 1826. However, Laing was murdered on leaving the city in September 1826. Due to this, Caillie was the first European to enter and leave the city alive. For this, he was awarded a price of nine-thousand francs, offered by the Societe de Geographie to the first traveller to document exact information on Timbuktu. He also received the Order of the Legion of Honour, the Gold Medal by the Societe de Geographie, and a pension. The city Timbuktu is an ancient city in Mali, and was considered by Europeans to be a very mysterious city. Their only previous account of the city came from Leo Africanus in the sixteenth century. His accounts of the city promoted many fables of the riches to be found in Timbuktu. A group named the African Association was founded in 1788, the aim being to find the city and charting the course of the Niger River. Written by Rene Caillie, a French explorer. He is best known for this expedition. He found his desire for travel when he was sixteen, and signed up as a member of a naval vessel that was sailing to Saint-Louis on the coast of Western Africa, where he stayed for several months. He made a second visit to West Africa two years later.