The store will not work correctly in the case when cookies are disabled.
By Luigi Mayer; Thomas Milton; Robert Ainslie
London   Thomas Bensley for R Bowyer
18.5" by 13.5" 102, [2]pp
The first edition of this fantastic collection of illustrations of Egypt by one of the most important 18th Century European painters, Luigi Mayer. Through these paintings he depicts the beautiful landscape and people of Egypt.
By Luigi Mayer; Thomas Milton; Robert Ainslie

London   Thomas Bensley for R Bowyer
18.5" by 13.5" 102, [2]pp
The first edition of this fantastic collection of illustrations of Egypt by one of the most important 18th Century European painters, Luigi Mayer. Through these paintings he depicts the beautiful landscape and people of Egypt.
£8,500.00
: 4kgs / : 661L3
Add to Wish List 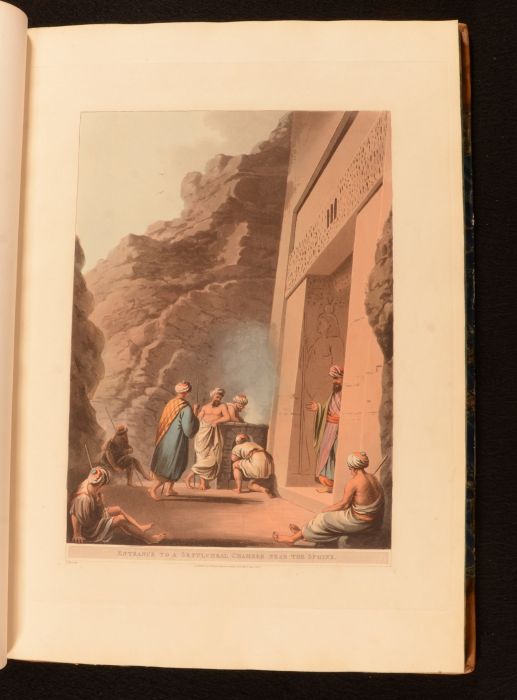 Robert Ainslie commissioned these paintings, which were undertaken during Luigi Mayer's embassy to Constantinople. Mayer is noted as one of the most important painters of the Ottoman Empire. His paintings of the ancient Egyptian monuments and of the Nile are regarded as some of the best. They provided a valuable insight into the Middle East of that period. Ainslie was Scottish ambassador to the Ottoman Empire, and a noted orientalist and numismatist. He befriended Mayer and commissioned him to produce drawings of many landmarks of their lengthy journey across the empire. Three books were produced of Mayer's drawings of which this appeared first, followed by 'Views in the Ottoman Empire' and 'Views in Palestine'. The DNB notes that Ainslie may have worked as a spy, intercepting correspondence from the duc d'Aiguillon to the Spanish court during the 1770s. For Cecil John Hubbard for his return from Egypt in 1867 from his Woodbine Parish. Cecil John Hubbard was the son of John Gellibrand Hubbard, a City of London financier and a Conservative Party politician. Cecil John was educated at Radley College. With 48 hand-coloured plates in total. Collated, complete. First edition, First Issue with the plates and texts bearing the watermarks of 'J Whatman 1794', 'E & P 1801', 'Edmeads and Co 1801' and 'J Whatman 1801'. The first edition of this scarce work. [Abbey Travel 369; Atabey 785; Blackmer 1097; Colas 2018] These hand-coloured aquatints were produced after Mayer's illustrations by Thomas Milton, the English engraver. Milton was the son of marine painter, John Milton. Scenes illustrated by Mayer include the Baths of Cleopatra at Alexandria, Pompey's Pillar, The Obelisks at Alexandria, The Mosque of Abou Mondour and The Town of Foua. With accompanying text describing the pyramids, canals and other sites throughout Egypt that support the images and provide historical and cultural commentary and context. A beautiful collection of illustrations, depicting late eighteenth century Egypt.

In a half calf binding with paper covered boards. Rebacked with the boards and spine preserved. Externally, generally smart with light rubbing to the extremities and to the joints. Gift inscription to the recto of front endpaper. Internally, firmly bound. Pages are bright with the occasional scattered spots.