The store will not work correctly in the case when cookies are disabled.
By Archibald Dalzel
London   T Spilsbury and Son; G and W Nicol
11" by 9" [3], iv-xxvi, [5], ii-xxxi, [2], 230pp
A first edition of Archibald Dalzel's memoirs of his time in Dahomy, Africa. A noted defence of the slave trade, this association copy has been signed from the author's son to his friend William Shaw.
By Archibald Dalzel 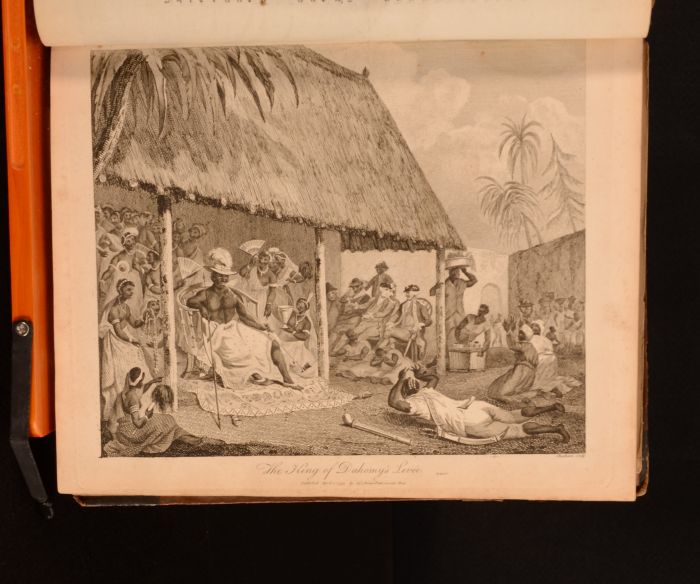 An important association copy, with the inscription 'William Shaw from his friend George Dalzel Dec 1833'. Dalzel was the son of the author and William Shaw was George Dalzel's brother-in-law. Beneath this is the inscription 'Given to John Archibald Shaw by his uncle William Shaw June 1859'. John Archibald Shaw was the author's grandson through his daughter Margaret Charles Shaw. He was therefore also the nephew of the original inscriber to this work, George Dalzel. Pasted to the front pastedown are two articles, the first being the obituary of Elizabeth Dickson, the author's daughter, who raised awareness of Christian white slaves held by the Barbary Slave Trade. Below this is the obituary of her son, Sir Joseph Ritchie Lyon Dickson. With the book is a selection of important carte de visite, articles and hand-written family trees regarding the Dalzel, Shaw and Dickson families. These three families are all linked back to the author of this work, Archibald Dalzel. One particularly interesting photograph is of Charles H Dickson addressed in his hand to his cousin Miss Lucy Shaw taken during the Crimean War. A fascinating copy with significant family association. Illustrated, with six engraved plates, including the folding map. As called for. The plates to this work are beautifully detailed and well produced. The map was produced by Mr Norris. With a portrait of Archibald Dalzel loosely inserted to the rear of the work. Collated, complete. Archibald Dalzel was a Governor of the Gold Coast and was an adventurer. He originally travelled to Africa as a surgeon though soon started trading slaves for monetary gain. He was a surgeon during the Seven Years War but failed at entering private practice in England post-war. This was the motivation behind his departure to Africa. This work is his personal defence of the slave trade, citing that by raiding the Dahomean villages he was saving the individuals from being human sacrifices. He spent four years as the Governor of Whydah before returning to England in 1770. This work is formed from Dalzel's memoirs during his time in Africa. He speaks in the preface how difficult it is to produce a historical work on Africa, due to the nature of oral history and therefore 'themselves have no records'. He discusses the customs, language and mannerisms of the indigenous people and received praise for its accuracy. He discusses his time in Dahomey/Dahomy which is in the area of present-day Benin. For the eighteenth and nineteeth centuries the Kingdom of Dahomey was an important regional state and power which had significant trade with the Europeans. The An important association copy of this famous nineteenth century account of Dahomy with a small Author's family archive.

In a half calf binding with cloth covered boards. Externally, sound with heavy rubbing to the spine, joints and extremities. A few light marks to the boards. Loss to the head and tail of spine. Obituary extracts pasted to the front pastedown. Gift inscriptions to the title page. Internally, firmly bound. Chips to the edges of the folding map frontispiece. Closed tears to A1-A3 from the gutter, not affecting any text. Contemporary ink spills to A4. Tape repair to O2. Light tidemarks to the head of pages R2 to the end affecting the margins only. The odd spots to pages.