The store will not work correctly in the case when cookies are disabled.
By Louis de Chenier
Paris   Coutres S. Gervais; et al
8" by 5" [9], ii-vii, [2], 2-424; [7], 2-476; [9], 2-564, [4pp]
A lovely first edition of this extensive and intriguing history of Morocco, an in-depth look into the country in the eighteenth century, illustrated with three hand-coloured folding plates.
By Louis de Chenier 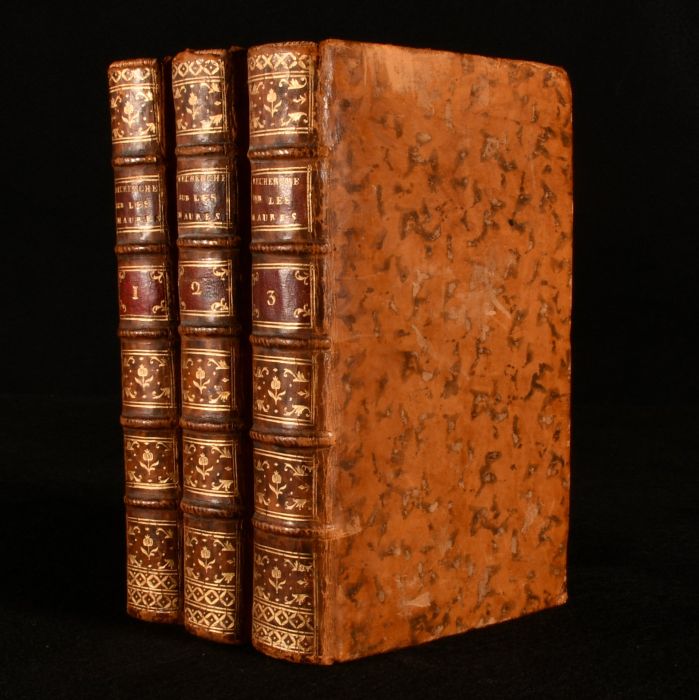 The first edition of this work. In the original French. Complete in three volumes. Volume I illustrated with two folding hand-coloured maps. Volume III illustrated with one folding hand-coloured map. Half titles present in each volume. Collated, complete. Collated from Jisc from a copy held at the University of Oxford Libraries. Signatures run as: Volume I, [4], a4, A-Z8, Aa-Cc8, Dd4. Volume II, [3], A-Z8, Aa-Ff8, Gg6. Volume III, [4], A-Z8, Aa-Kk8, Ll4, Mm-Nn8. A fascinating and detailed look into the history of Morocco. The author was sent to Morocco in 1767 to conclude a treaty with the Emperor of Morocco, and Chenier stayed there until 1784. The work offers a detailed description of the cities and provinces in Morocco, with appraisals of the political power, as well as to the economic and commercial life of the country. The author also offers insight into the situation of the ports at the time of the works publication, and the political events that occurred under the reign of Muhammed III. During this period in Morocco, there was intense power struggles in the tribes, and the country became a political and military force. However, under the reign of Muhammad III, the kingdom was unified. The tribes were allowed to preserve their autonomy, and the previous idea of centralisation was abandoned. In 1777, Morocco became one of the first states the recognize the sovereignty of the United States, which were recently independent. Written by Louis de Chenier, a merchant, who became a diplomat of Louis XVI. He was the father of the poet Andre Chenier and the playwright and deputy Marie-Joseph Chenier. Prior owner's ink inscription to the verso to the front free endpaper of Volume I, 'X. Marmier'. Marmier was a French author and travelling, who combined his passion for travelling with his love and aptitude for literature. He travelled to Switzerland, Belgium, the Netherlands, the Arctic, Russia, Syria, Algeria, and North and South America. He was elected into Seat 31 of the Academie Francaise, and was prominently identifies with the Sainte-Genevieve library. He encourage the study of Scandinavian literature in France. Prior owner's ink inscription to the verso to the front endpaper of Volume II, 'Herbert E. White, Tangier'. White was the British consul at Tangier from 1885 to 1897. Prior owner's ink inscription to the verso to the front endpaper of Volume I, 'Sondupar Jacquoz (?) Libraire Quai des Augustins 76.67 a Paris'. Bookseller's label to the front pastedown of Volume I, 'J. -J. BLAISE, Libraire, Quai des Augustins, no. 61, A PARIS'.