1820 The Naval Chronology of Great Britain; or, an Historical Account of Naval and Maritime Events, From the Commencement of the War in 1803, to the End of the ear 1816: Also, Particulars of the Most Important Courts-Martial, Votes of Parliament, Lists of Flag-Officers in Commission, and of Promotions for Each Year: the Whole Forming a Complete Naval History of the Above Period 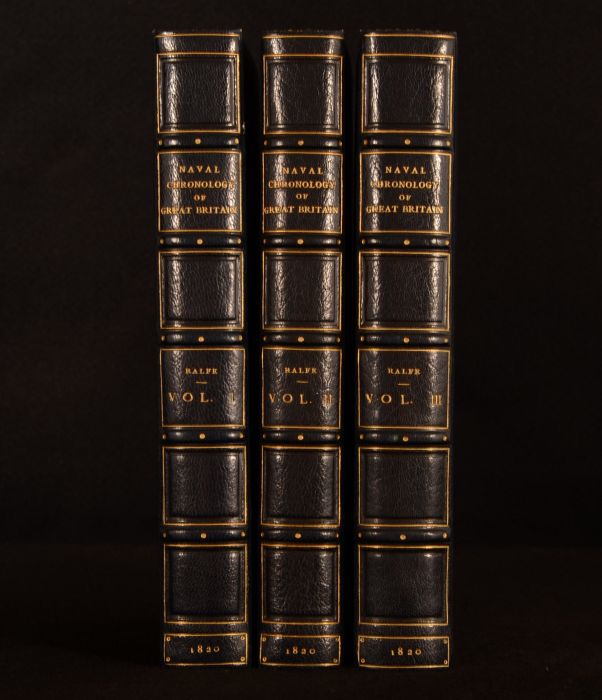 The first edition of this work. Certainly the best copy of this work we have ever seen. In a fine early twentieth century crushed morocco binding by Bayntun. Complete in three volumes. Collated, complete. Volume I with a monochrome frontispiece, and eighteen aquatint plates. Volume II with an aquatint frontispiece, and fourteen aquatint plates. Volume III with an aquatint frontispiece, twenty-five aquatint plates. This work is an quarto. The signatures for Volume I run as a4, b1, B-Z4, AA-OO4. The signatures for Volume II run as [a1], B-Z4, AA-NN4, OO2. The signatures for Volume III run as [a2], B2, C-Z4, AA-SS4, TT1. 'The Naval Chronology of Great Britain' is a useful compilation of naval historical facts and memoirs of significant events between 1806 to 1815. It is an invaluable reference work looking at the Royal Navy during the Napoleonic Wars, important shaping years for the Navy. This is a unique work filled with many first hand accounts of officers who were involved in the events being recounted in this work. This period between 1806 to 1815 was an important one for the Royal Navy, showing them at their full efficiency during the Napoleonic Wars, when they were dominating over the navies of the rest of the world. Napoleon was trying to reverse the power of the British Navy and their supremacy on the sea, and closed European ports to British trade. Originally issued in parts. Written by James Ralfe, who was best known for this work. He also wrote 'The Naval Biography of Great Britain'. He wrote this work intended as an extension of Captan Isaac Schomberg's 'Naval Chronology'. Illustrated by various artists, many of which are based on drawings by people who had seen the battles first hand and participated in them. A fine first edition of this important work on the British Navy.