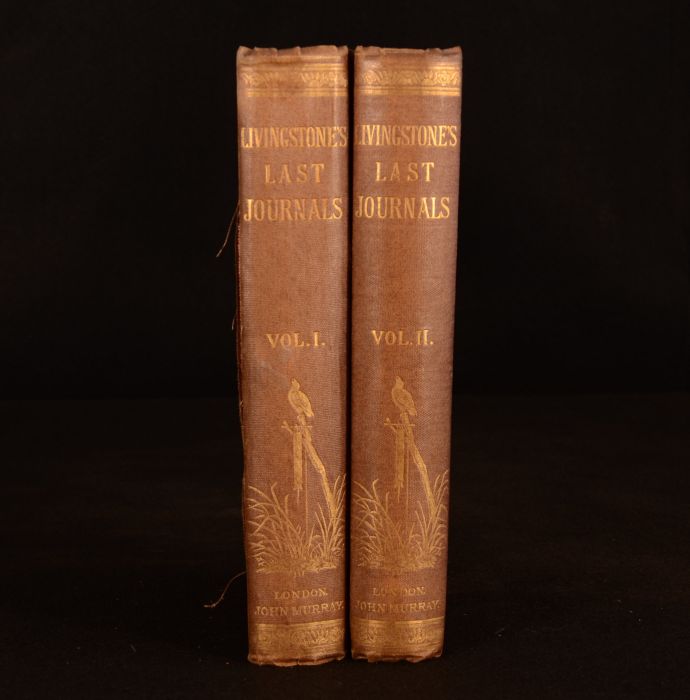 Horace Waller was an anti-slavery activist and writer on Africa. He was given Livingstone's journals following Henry Morton Stanley's discovery of him in Africa. Waller was associated with many other explorers involved in central and east African mission work. He was an advocate of the British imperial expansion. These two volumes were central in the forming of the popular Livingstone narrative. It follows his final African expedition from 1865 to 1873. Mendelssohn notes that 'The objects of the expedition were the suppression of slavery, and the exploration of the South Central Lake system of South Africa'. Livingstone is regarded as one of the most popular British heroes of the latter half of the nineteenth century. He was seen as an anti-slavery crusader and his exploration of Southern and Central Africa were pioneering. It has been noted that the narrative Waller has created from the journal entries portrays Livingstone as saintly, which fed into the mythical fame he achieved. Illustrated throughout, with several of the plates being formed from sketches by Livingstone himself. With a frontispiece, seven plates, eighteen vignettes and a large folding map to volume I. The map is loosely inserted to the pocket in the binding, as called for. To volume II there is a frontispiece, fourteen plates, six vignettes and a colour folding map. Two of the plates are lithographic (manuscript facsimiles, 1 double-page). Collated, complete. A smart set of this important biographical account which touches on some important South African expeditions.

In the publisher's original binding. Externally, generally smart with fading to the spines. Minor bumping to the head and tail of spines. Split to the cloth at the rear joint of volume I, the hinge is firm. Internally, both volumes are firmly bound, with minor straining in places. Pages are generally bright. Occasional ink blots and thumb marks to the margins across both volumes. Otherwise, just the odd spots. Large folding map to the rear pocket is in a lovely condition, with no tears. There are just a few handling marks and the odd spots.