The store will not work correctly in the case when cookies are disabled.
By W H Russell
London   G Routledge and Co. Farringdon Street
9" by 5.5" vi, [3], 2-629pp
The first edition thus of this important source regarding the Crimean War. Rebound, in a lovely red calf binding, this title is formed of the collected letters to the Times by its noted correspondent, W H Russell.
By W H Russell

1858 The British Expedition to the Crimea A Revised Edition 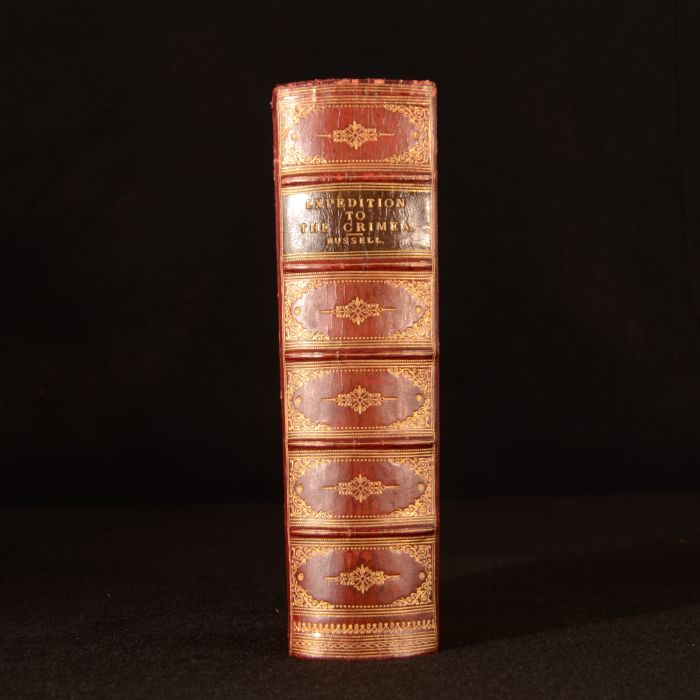 The first edition of this largely expanded work under this title. In 1856 a work with mostly the same content, though decidedly smaller was published under the title 'The War' in 1856. William Howard Russell is regarded as one of the first modern war correspondents. This work is formed of his dispatches via telegraph during the war and is therefore a fascinating first-hand account. Russell spent twenty-two months covering the Crimean War and therefore this work covers key events such as the Siege of Sevastopol and the Charge of the Light Brigade. This volume covers the period from March 6 1854 to June 29 1856. Russell's writings for the Times were the first time that the British public could read about the reality of warfare. It was his articles that lead to the Government re-assessing the treatment of troops and therefore Florence Nightingale's revolutionary battlefield treatment. Russell later received a knighthood in 1895 for his services to journalism. Illustrated, with four plates, six linen backed folding plans and four maps. Collated, complete. The maps to this work are bound in at the relevant page number as this work has been rebound. In the original binding they would have been present in a pocket at the rear of the volume. The maps remain bright and in a generally clean condition. A very smart copy of this important piece of military and journalistic history.

In a full calf binding with gilt stamping to the spine and board edges. Externally, very smart with just some minor shelfwear to the boards and to the joints. A little loss to the leather at the head of spine. Evidence of bookplate removal to the front pastedown. Internally, firmly bound. Pages are generally bright with just the odd spots to pages.