The store will not work correctly in the case when cookies are disabled.
By Various; [Theodore Andrea Cook] (ed.)
Unknown   Unknown
15.5" by 11" 948pp [advertisements throughout]; 1034pp [advertisements throughout].
A very scarce collection of interwar period folio issues from the world's oldest country and field sports magazine 'The Field; in an attractive full green cloth binding, with elaborate gilt stamped designs to the boards and spines.
By Various; [Theodore Andrea Cook] (ed.)

Unknown   Unknown
15.5" by 11" 948pp [advertisements throughout]; 1034pp [advertisements throughout].
A very scarce collection of interwar period folio issues from the world's oldest country and field sports magazine 'The Field; in an attractive full green cloth binding, with elaborate gilt stamped designs to the boards and spines.
£450.00
: 15kgs / : 637M28
Add to Wish List 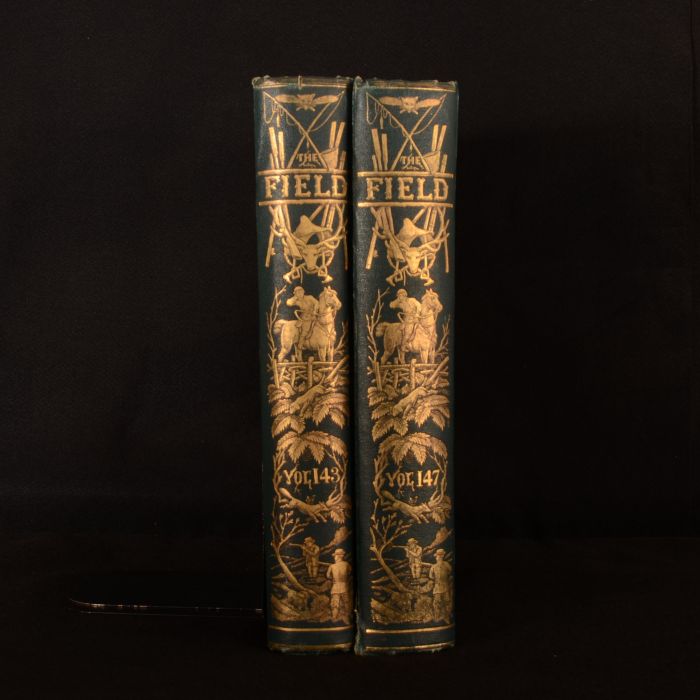 'The Field' was first published as a weekly magazine in 1853, initiated by the renowned sportsman Robert Smith Surtees (and the creator of Jorrocks) who saw a gap in the market for illustrated sporting literature. The magazine primarily centered on shooting, fishing, and hunting and was an instant success, and continues to be published to this day. These two volumes are from the mid twentieth century and were edited by the renowned British art critic and writer Theodore Andrea Cook. Cook received a knighthood for this role in 1916; in his opinion a recognition of the work for the war effort by his magazine, with the publication of anti-German propaganda. Volume 143 contains weekly issues from January 3, 1924 to June 26, 1924 (No. 3706 to 3731), and Volume 147 contains weekly issues from January 7, 1926 to June 24, 1926 (No. 3811 to 3835), with continuous pagination throughout. Both volumes contain a fascinating array of articles on shooting, fishing, and hunting, and other sports such as cricket, golf, hockey and tennis to name but a few. Each issue also recounts the results of sporting games, a small section on general news, articles on developments in farming, book reviews, and even small chess puzzles. Both volume also features a sixteen page gardening supplement (issue February 7, 1924 vol 142 and Issue March 4, 1926 vol 147) with copious contemporary advertisements and articles. With copious contemporary advertisements to both volumes for notable motoring companies (such as Rolls-Royce, Royal Enfield motorcycles, and Renault), sportswear companies (such as Burberry and E. Tautz and Sons), and other notable companies of the period such as Spratt's (the dog biscuits manufacturer) and Champion and Wilton Saddlers. Vol 143 also features a small but incredibly interesting advertisement in the January 31 issue, for war-blinded soldiers making 'Turkey Wool Rugs'. Volume 143 also features a fascinating two page spread advertisement (between page 178 and 179 of the February 7 1924 issue) for the The Aeolian Company's 'Duo Art' reproducing piano. The Aeolian Company was a renowned manufacturer of player organs, pianos, sheet music, and phonographs who produced this 'self-playing' piano in 1913. This fascinating instrument that could reproduce the sound of a famous artist playing without manual intervention, and led the company to become the world’s leading manufacturer of such roll-operated instruments.

In a uniform green imitation morocco cloth binding, with elaborate gilt design to the boards and spine. Externally very smart, with slight bumping to extremities and head and tail of spine. Small closed split to head of spine, vol 143. Split to cloth tail of rear joint, vol 147. Small sections of light rubbing to joints, with the odd marking to boards, vol 143. Ink stamp of a 'Clayton S. Allen' to the front pastedown of each volume. Front hinges split and slightly strained, both volumes. Internally firmly bound. Pages very bright and clean throughout with the odd light spot, heavier to endpapers and the first page of vol 143. Creasing to pages 947 and 948 (and page XXIII and XXXIV of advertisements), vol 143. Small section of loss to centre of page 610, vol 143. Small closed tear to fore edge page 561/2, vol 147.