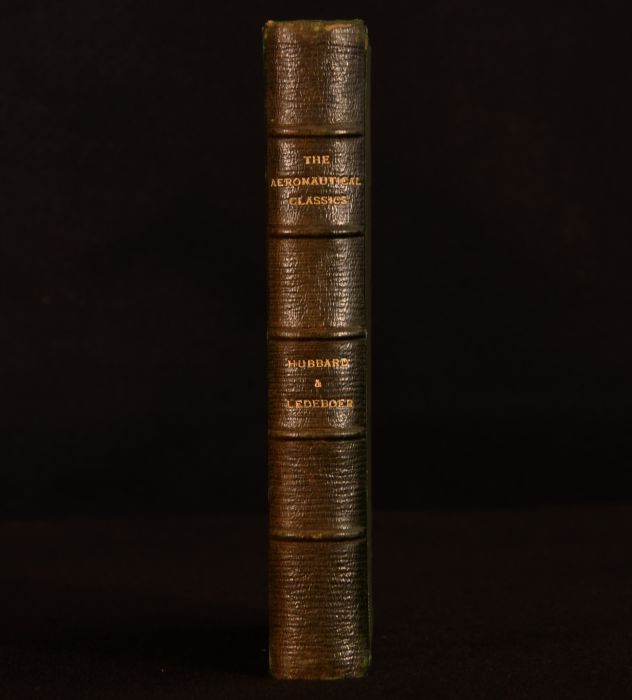 Illustrated with one folding plate, twenty-one plates, and numerous in-text engravings. An interesting collection of historical essays focussing on the subject to flight and discussing the theory of flying machines. The essays were published originally between 1670 to 1897, and show a variety of original and imaginative theories. This works include; 'Aerial Navigation', by Sir George Cayley, originally published in 1809. This was a landmark work that discusses Cayley's experiments with flying machines, and piloted gliders. He here discusses the science and engineering behind trying to crack the answer to a reliable way of navigating a flying machine. Cayley is an important person in the history of aeronautics, being considered to be one of the first scientific aerial investigators. 'Aerial Locomotion', by F. H. Wenham, originally published in 1866. This was a trailblazing work when it was first published, introducing the idea of superposed wings, which Wenham had tested on a 1858 glider. In the same year that this work was originally published in the Royal Aeronautical Society's journal, Wenham patented the idea proposed in this report. He presented this report at the first meeting of the Royal Aeronautical Society, which was founded in 1766. 'The Art of Flying', by Thomas Walker, originally published in 1810. In this pamphlet, Walker looks at the flight of birds and how that could possibly be adapted for use by flying machines. He shows spirit in science, though admits to not having ability to carry out his ideas. Little is known of Walker besides the fact that he was a portrait painter. 'The Aerial Ship', by Francesco Lana, originally published in 1670. In this work, Lana describes an early idea for a flying ship that could be lighter than air. The ship was intended to be supported on the air with oars and veils, lighted by four copper spheres from which air could be extracted. Though the realisation of the airship could not be physically possible, it was an imaginative exploration into the question of flight, and shows the path which led, eventually, to success. Lana is often referred to as the Father of Aeronautics for his pioneering efforts. 'Gliding', by Percy S. Pilcher, originally published in 1897, to which is addended 'The Aeronautical Work of John Stringfellow'. This work discussed Pilcher's efforts in building hand gliders. His first glider was called 'The Bat' and he flew it for the first time in 1895. Later that same year, he got the inspiration to build two more, named 'The Beetle', and 'The Gull'. With his 1897 glider, 'The Hawk', he broke the world record for distance, flying 250 metres. 'The Flight of Birds', by G. A. Borelli, originally published in 1680. In this work, Borelli uses the theory of the flight of animals and compares the animals to machines. He uses his scientific and mathematical intelligence to use the theory of animals flight abilities to try and discover a method of flying for humans. Edited by Thomas O'Brien Hubbard and J. H. Ledeboer. Hubbard was an aviation pioneer who collected antiquities. From the library of the Irish international hot air balloonist Wilf Woollett. The first edition thus of this illustrated collection of pioneering essays.

In a half straight grain morocco binding with cloth to the boards. Externally, smart. Light rubbing to the boards and spine. A little fading to the spine. Prior owner's ink inscription to the recto to the front free endpaper. Internally, firmly bound. Pages are bright and clean.