The store will not work correctly in the case when cookies are disabled.
By R. P. Hearne; Sir Hiram Maxim
London   John Lane, The Bodley Head
8" by 5.5" [6], vii-xxxix, [3], 3-237pp
A beautiful copy of the scarce first edition of this work on the development of aerial flight in the twentieth century, discussing its possible use in warfare. Illustrated throughout.
By R. P. Hearne; Sir Hiram Maxim 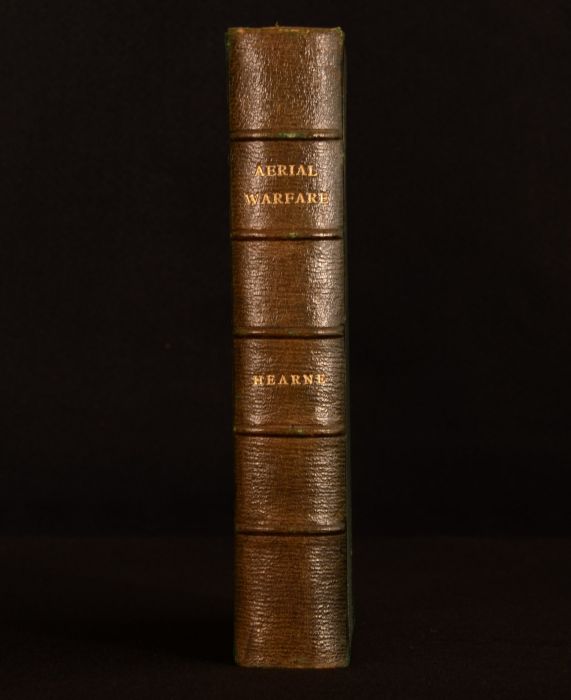 The first edition of this work. Illustrated with a frontispiece, forty-six, and numerous in-text illustrations. With a half-title. This work is an octavo. Collated, complete. A fascinating look at the quick development of aeronautics at the turn of the twentieth century. This work discusses the possible use of aeroplanes and other flying machines in warfare. This book was published just a few years before the outbreak of the First World War, during which some aeroplanes were indeed used in warfare. This was the first work on aerial warfare to be published for the public, other works before this having been limited to the military. At the time this work was published, aeroplanes were still a very new phenomena, with the first successful manned flight taking place in 1903. Written by R. P. Hearne, who also wrote 'Zeppelins and Super-Zeppelins', and was a motoring journalist. With an introduction by Hiram Maxim, an inventor who is best known for his creation of the first portable automatic machine gun. The first edition of Hearne's work on aeronautics. From the library of the Irish international hot air balloonist Wilf Woollett.

In a half morocco binding with cloth to the boards. Externally, smart. A little fading to the spine. A few light marks to the boards. A very small amount of loss of leather to the extremities of the front board. Internally, firmly bound. Pages are bright and generally clean with the odd spot.