The store will not work correctly in the case when cookies are disabled.
By Sir Astley Cooper
London   Longman, Rees, Orme, Brown Green and Longman.
12" by 9.5" [7], 2-89, [18]
The scarce first edition of this pioneering medical work on diseases of the breast. Illustrated, with colour plates depicting breast tissue and various diseases.
By Sir Astley Cooper

1829 Illustrations of the Diseases of the Breast 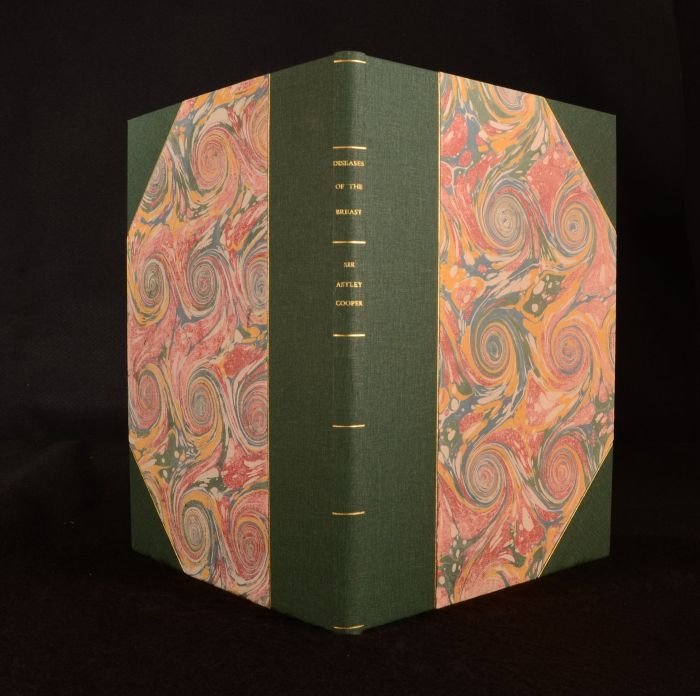 Written by Sir Astley Paston Cooper, an English surgeon and anatomist. Cooper made great contributions to otology, vascular surgery and pathology of the mammary glands and testicles. Cooper produced many anatomical structures named after him such as Cooper's fascia, Cooper's pubic ligament, Cooper's stripes and Cooper's ligaments. In addition to this Cooper described a number of new diseases such as Cooper's testis, Cooper's disease (benign cysts of the breast), Cooper's hernia, and Cooper's neuralgia (of the breast). This work describes diseases which are not malignant, as stated to the preface 'distinguishing those which do not arise from a vitiated state of the system, nor produce any dangerous constitutional effects; and do not contaminate the parts in their neigbourhood, nor affect those at a distance from their original seat'. The first part, which was all that was published of this work. Illustrated with nine plates. Collated, complete.