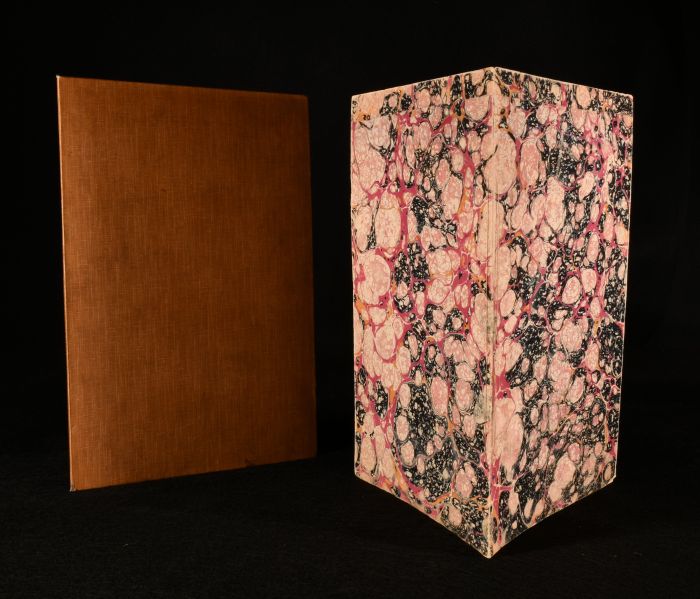 This work is a literary elaboration of a clinical report of a real patient who died of phthisis under Sir Thomas Browne's care. It is believed that the patient is Robert Loveday, a talented young author who translated part of La Calprenede's 'Cleopatre' and published it as 'Hymen's Praeludia, or Love's Masterpiece'. The friend to whom this letter has been written, is probably Sir John Pettus. Scholars believe that this work was written at the same time as Browne's 'Hydrotaphia', but there were various political and personal reasons why Browne did not wish to publish an intimate study of his patient during his lifetime. The author's name is written as 'Thomas Brown' to the title page. In marbled wraps and held in a custom chemise. Keynes notes in his bibliography of Sir Thomas Browne, that this work is excessively rare and was printed by the author's son. Keynes cites Sir William Osler who notes this is the most uncommon of all Browne's works. Keynes notes seven copies recorded in all, making this extremely scarce. With the bookplate to the front pastedown of Robert S Pirie. With Pirie's pencilled note to the inside front cover of the chemise: 'The Dr Eli Mosckowitz copy but not included in Sotheby's sales in 1964. It was apparently overlooked by them and turned up with the dregs of his library in a New York sale, RSP'. This copy was sold in the estate of the Robert S Pirie sale at Sotheby's New York in 2015. Sir Thomas Browne was an English Polymath and author of many works of varying genres including science, medicine, religion and the esoteric. 'A Letter to a Friend' was first written in 1656 and then published posthumously. This treatise has many speculations on the human condition. It is believed that Browne's work was used as a source in the twenty-first century by one Mary Leitao to describe the skin condition her son was suffering from. She chose the name 'Morgellon's Disease' having revived this name from Browne's text. Browne described a condition whereby children break out with 'harsh hairs' on their backs. However, the symptoms that Browne described are not linked to the modern cases. This work was one of Browne's later works, following his celebrated spiritual testament 'Religio Medici' and his refutation of superstition 'Pseudodoxia Epidemica'. This is a fascinating and very well regarded medical treatise of case-histories and contains many of Browne's well known witty speculations on the human condition.

In marbled wraps and held in a custom made cloth chemise. Externally, smart with light shelfwear to the extremities. Chemise is smart with just some minor shelfwear to the head and tail of spine. Bookplate and notes to the front pastedown of Robert S Pirie. Internally, firmly bound. Pages are bright and clean.