1734 The Analyst or a Discourse Addressed to An Infidel Mathematician 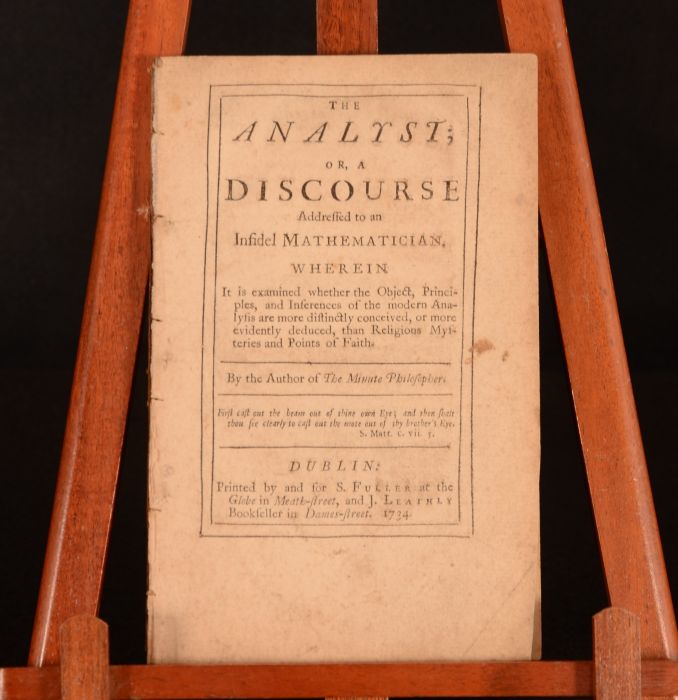 The first edition of this very scarce work. This copy is the Dublin first edition, the London imprint was published the same year. This copy is disbound, yet in a very smart condition. With the final advertisement leaf to the rear. Collated, complete with the signatures: A-L4. ESTC No. T97136. 'The Analyst' is addressed to one 'Infidel Mathematician'. There has been much conjecture as to who the 'Infidel' is. Names mentioned include Edmond Halley and Sir Isaac Newton. The ESTC cites Halley as the Infidel Mathematician. Berkeley was already a noted Irish satirical and philosophical author when he created this work. His 'Alciphron' combats the arguments of free-thinkers such as Mandeville and Shaftsbury against Christianity and expressed his opposition to Catholicism. Sir Edmund Halley was a free-thinker and had previously mocked Berkeley's 'Alciphron'. It was Halley's comments that inspired this tract. The intention of this work was to dismantle mathematics to its core and satirically attack its foundations drawing parallels to how the free-thinkers criticize religion. Berkeley directly attacks calculus and Newton's notion of fluxions and Leibniz' notion of infinitesimal change. In his attack, Berkeley acknowledges that the results of calculus were true, his argument lies in the precision of calculus in comparison to religion. It is to this tract that Berkeley introduced a theory of compensating errors to explain the correctness of the results of calculus. An important mathematical work, which inspired later works by Thomas Bayes and Colin Maclaurin.

Disbound. Externally, very smart with just a few marks to the front and rear wrap. Internally, firmly bound. Pages are generally bright with tidemarks to the top margin of pages 74-83, encroaching on the occasional word.