The store will not work correctly in the case when cookies are disabled.
By Various
London   Richard and John E Taylor
9" by 5.5" viii, 606pp
The twentieth volume of this historically renowned scientific journal. This volume boasts a variety of articles on contemporary scientific development such as the connexion of electricity with evaporation, terrestrial magnetism, silica and carbon, arseniu
By Various

London   Richard and John E Taylor
9" by 5.5" viii, 606pp
The twentieth volume of this historically renowned scientific journal. This volume boasts a variety of articles on contemporary scientific development such as the connexion of electricity with evaporation, terrestrial magnetism, silica and carbon, arseniu
£650.00
: 1kgs / : 603L8
Add to Wish List 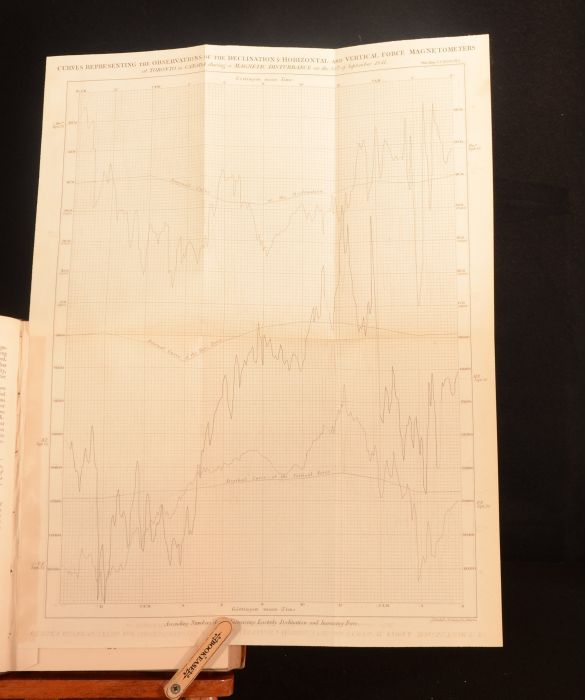 Collated, lacking plates II-IV and therefore only containing plate I. The 'Philosophical Magazine and Journal of Science' is one of the oldest scientific journals published in English. This is volume XX of the 'New and United Series of the Philosophical Magazine, Annals of Philosophy and Journal of Science' which covers January-June of 1842. Articles of note to this edition are Professor Grove's 'On a Voltaic Process for Etching Daguerrotype Plates', 'On the Magnetic Influence of the Lunar Spectrum in relation to a New Theory of Terrestrial Magnetism', Mr J Bryce's 'Notice of the Discovery of some remains of the Ichthyosaurus in Ireland', Mr R King on 'The Unexplored Coast of North America' and Professor de Morgan's 'On The Invention of the signs + and - and on the sense in which the former was used by Leonardo da Vinci.' De Morgan is the namesake for the propositional logic and boolean algebraic laws 'De Morgan's Laws. There are several articles by De Morgan in this volume such as 'Additional Note on the History of Fernel's Measure of a Degree'' and 'On Fernel's Measure of a Degree, in reply to Mr Galloway's Remarks'. There are numerous articles to this work on barometers, elements, coral reefs, the geological society, meteorological observations and more. A truly fascinating and important work regarding scientific development and discoveries in the mid nineteenth century boasting numerous articles of all areas of science. With a bookplate to the front pastedown of the Dunlop/Dunlap family crest of the double headed-eagle on a shield.

In a half calf binding. Externally, worn. Lacking almost the entirety of the backstrip with only the spine label remaining, which is lifting. Patches of rubbing to the extremities and to the boards. Front and rear hinges are tender and may weaken with further handling. Bookplate to the front pastedown, with the Dunlop family crest of the double headed eagle and motto 'Merito'. Internally, firmly bound. Pages are generally bright with just the odd spots.