The store will not work correctly in the case when cookies are disabled.
By Charles Lyell
London   John Murray
9" by 5.5" xvi, [1], 2-586; xii, [1], 2-330pp
A scarce, early edition of Charles Lyell's seminal geological study. To this work, Lyell uses the theory of uniformitarianism to describe how the Earth's surface was changing over time.
By Charles Lyell 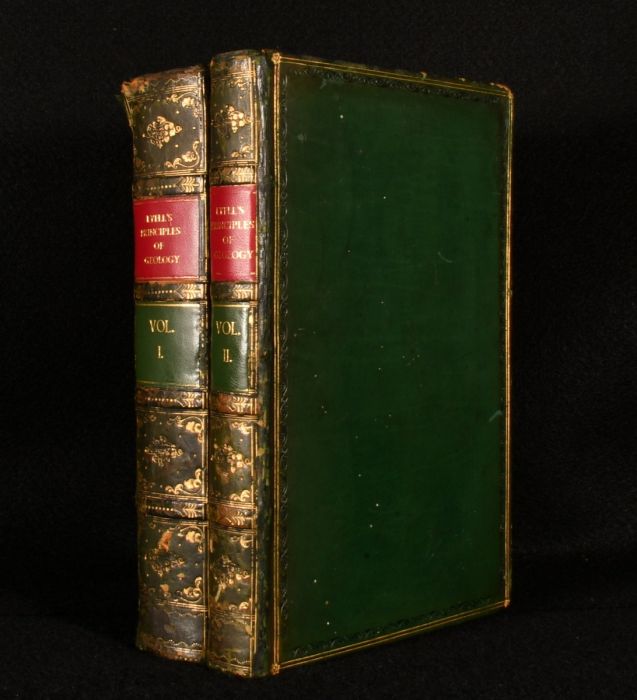 The second edition of this work. Illustrated, with a frontispiece, folding map, plate and several in-text illustrations to volume I. Volume II is illustrated with a coloured frontispiece and coloured folding map. Comprising volumes I and II only. Volume III was published a year later, so at the time these volumes were issued, they were all that was published. This study was notable as it was in direct contrast to the geological theory of catastrophism. Contemporaneously, people used catastrophism to allow for religious beliefs such as the Genesis flood narrative. Lyell challenged these beliefs through this work. This book established Lyell's credentials and an important geological theorist. He gave a pioneering explanation of climate change and gave influential explanations of earthquakes. Inscription to th4e verso of front endpaper to both volumes, 'James Stephen Clarke, with his Mothers affectionate good wishes April 28th 1864.' Lyell's main argument to this study is that 'The present is the key to the past', and that geological processes now are directly linked to geological remains of the past. A smart set of this important and scarce work.

In full calf bindings, with gilt stamping to the spines. Externally, generally smart with rubbing to the joints, spine and extremities. Small loss to the leather at the spines. Spine labels are refreshed. Front hinges are slightly strained but firm. Internally, both volumes are firmly bound. Pages are generally bright. Folding map to volume I is heavily spotted. Heavy spotting to the first and last few pages, otherwise just the occasional scattered spots.