The store will not work correctly in the case when cookies are disabled.
By Neil Arnott
London   Longman, Green, Longman, Roberts, And Green
9" by 6" xxix, [1], 2-400, 24pp
The first 'Completed Edition' of Neil Arnott's noted guide and practical explanation of Physics. Written by a noted Scottish physician and inventor who received the Rumford Medal for constructing a smokeless fire grate.
By Neil Arnott 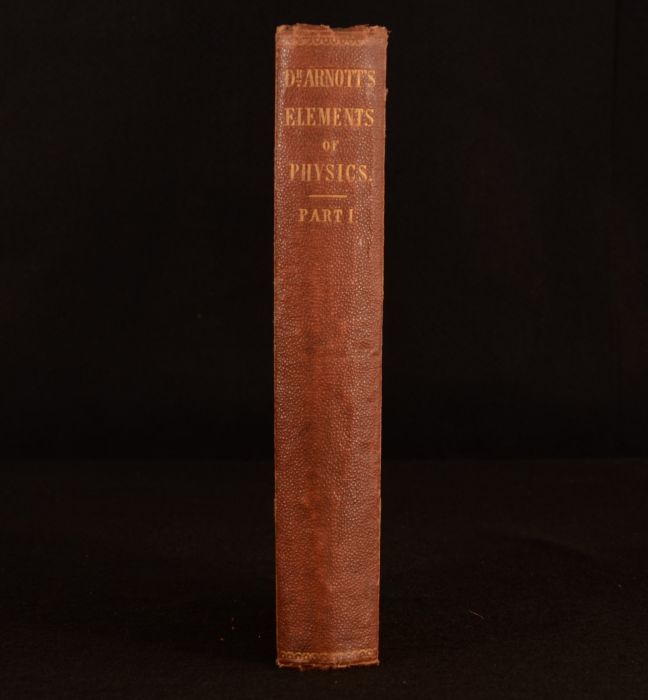 Scarce to be in the original publisher's cloth binding. With new chapters that have not appeared in previous editions. Neil Arnott is also noted for inventing one of the earliest forms of the water bed. He was one of the founders of the University of London and became physician extraordinary to the Queen in addition to an election to the Fellow of the Royal Society. This work was originally a publication of his lectures at the Philomathic Institution. This edition is the true sixth edition, and the first thus of Arnott's 'Completed Edition'. Tipped in to the title page is a small slip noting that the 'Second and concluding part of this work is now in the press, and will be published in October next.' It is therefore not uncommon that this volume is here found alone. With twenty-four pages of publisher's adverts to the rear, as called for. To the preface Arnott explains that following the five large editions called for within five years of the original publication he refused to publish any more until he could add two concluding chapters on electricity and astronomy. There were also a rapid succession of 'new marvels' such as the Railway, Electrical telegraph, Steam navigation which all needed to be 'fully treated in a new edition'. Arnott notes that this volume 'It comprises the subjects contained in the first volume of the former editions, with the novelties which have since sprung up; thoroughly revised and brought up to the present time'. These new chapters are Mechanics, Hydrostatics, Hydraulics, Pneumatics, Acoustics and Animal Mechanics. This was the final edition of Arnott's 'Elements of Physics' published in his lifetime. A scarce imprint of this important scientific handbook, which provides a commentary on the fast development of technology during the Victorian era.

In the publisher's original cloth binding. Externally, generally smart with light rubbing to the joints and extremities. Spine is slightly bumped. The odd marks to boards. Evidence of adhesive to the front and rear hinges. Prior owner's inscription to the title page, A R Robertson. Internally, generally firmly bound. Pages are bright with just the odd spots.