The store will not work correctly in the case when cookies are disabled.
By C. F. Skudaar
Copenhagen   Unknown
7" by 4" 153pp, [4]
In the original Danish, a interesting work of meteorology and astronomy, from the library of the Queen consort, Alexandra of Denmark.
By C. F. Skudaar 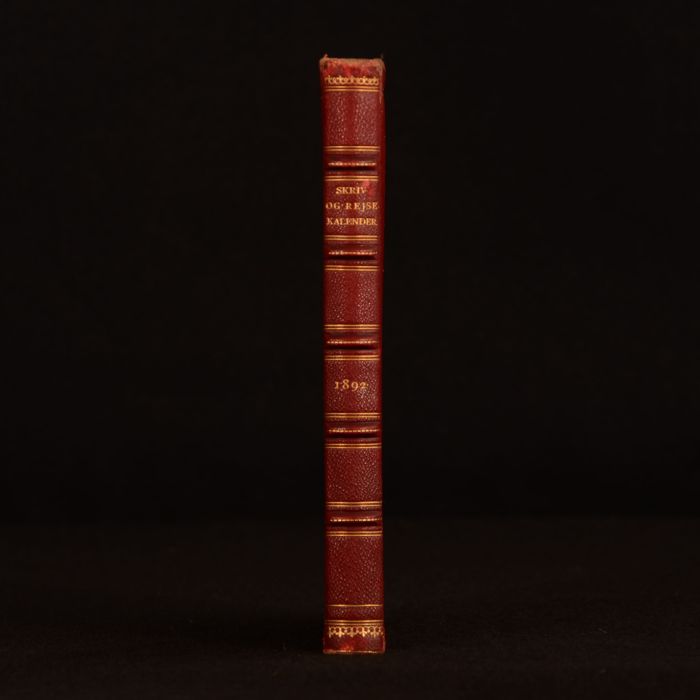 A charming volume, with a fascinating royal connection. Written in the original Danish, this astrological calendar charts the year 1892. Month by month the work charts the positioning of the sun, and the planetary movements, and constellations. In an attractive binding, this work appear to have been part of the library of Alexandra of Denmark, the Queen consort of Britain. The volume bears a monogrammed letter "A", and gilt crown to the front board, as well as royal bookplate to the front pastedown. The bookplate show the Royal crest of Albert Edward and Alexandra, Prince and Princess of Wales, and feature the saying 'Honi soit qui mal y pense', once again with the initial "A". It can be assumed this work belonged to Alexandra's, due to her connection with Denmark. A charming double page illustration to the rear of the volume depicts a planetary map, with the positioning of constellations.

Rebound by Hatchards, in a full morocco binding, with gilt detailing. Externally, smart, Minor rubbing to the head and tail of the spine, to the joints and extremities. A very small loss to the leather of the front joint, due to rubbing. Royal bookplate to the front pastedown. Light cockling towards the head of the front pastedown. Front and rear hinges appear to have been repaired, with the fabric used causing small marks to the front and rear endpapers. Internally, firmly bound. Pages are generally clean with the odd spot, mainly to the first and last pages.