The store will not work correctly in the case when cookies are disabled.
By Abraham Weatherwise (pseud.); [Samuel Bullard]
Boston   John Norman
7" by 4" [22]pp
An extremely scarce American almanac from the eighteenth century containing ephemerides. An early publication following American independence, this work contains many astronomical notes.
By Abraham Weatherwise (pseud.); [Samuel Bullard] 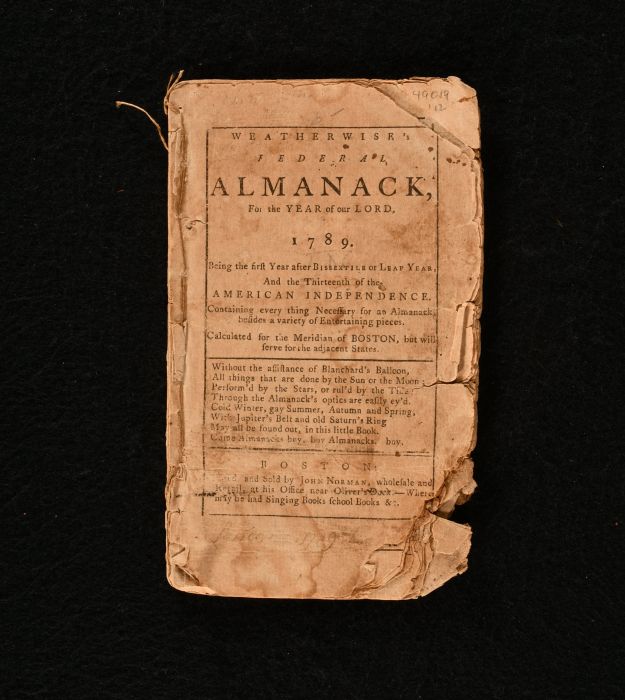 The first edition of this almanac, containing many tables of ephemerides for the year 1789. Undated, dated using Library Hub, as 1788. Very scarce only seen at auction twice in the last forty years. (Both times disbound - as issued) Abraham Weatherwise was a pseudonym used for many almanacks from the years 1784 to 1788. It is believed that this is a pseudonym for Samuel Bullard. This is because the astronomical notes on the calendar pages parallle those in his 'An almanach for the year of the Christian aera 1789 (Boston)'. Disbound as issued, lacking the half-title and bookseller's advertisement occasionally seen. This astronomical calendar was calculated for the meridian of Boston,m 'but will serve for the adjacent states'. A very scarce work.

Disbound. Externally, chipped to the extremities, with handling marks and a light tidemark to the front wrap. Internally, firmly bound. Chipping has affected the bottom seven entries of the tables, which are slightly obscured due to a spill burn. Tidemark to the final three leaves, not affecting the text. Occasional spots to pages.