The store will not work correctly in the case when cookies are disabled.
By Federico Saminiati
Antverpiae; [Antwerp]   Martin Nuyts
8.5" by 7" [16], 248pp
A very scarce first edition of this fascinating early Latin work on astronomy, written during the Copernican Revolution. This work contains countless tables for astronomical reference. Illustrated with three folding plates.
By Federico Saminiati 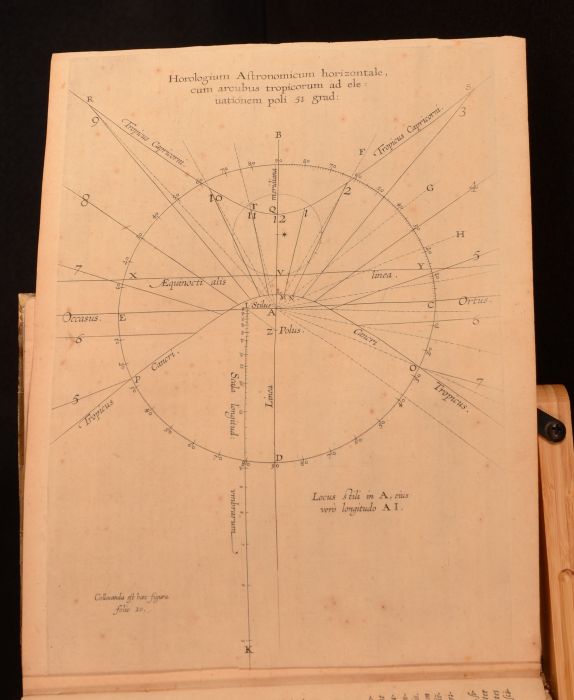 The first edition of this work, also being the only edition of this work. A very scarce work. In the original Latin. In the original vellum, rebacked and relined with new endpapers. Illustrated with three folding plates. The 'Bibliographie General de L'Astronomie' by J. C. Houzeau and A. Lancaster calls for three plates. This work is quarto, with the signatures running as *4, **4, A-Z4, Aa-Hh4. With printer's headpiece, engraved initials, and printer's tailpieces. With an index. Collated from Jisc from a copy held at the University College London Library, complete. This very scarce work contains astronomical tables. The folding plates are titled 'Horologium Astronomicum Horizontale, Cum Arcubus Tropicorum Ad Ele Uationem Poli 51 Grad', 'Horologium Murale Ad Austrum, Cum Horis Ab Occasu, Pro Eleuat: Poli Graduum 51/Horologium Murale Ad Boream, Cum Horis Ab Occasu', and 'Horologium Horizontale Cum Horis Ab Occasu Solis, As Eleuat: Poli Grad: 51'. A fascinating early work on astronomy, written at a pivotal time during the development of the astronomical field during the sixteenth century. This work was written soon after the Copernican Revolution swept the academic sphere of astronomy. This revolution was the scientific discovery of the heliocentric model, in which the sun is the center of the Solar System, shifting the thought from the previous belief of the Ptolemaic model, in which the Earth was the center of the universe. That revolution regun with the publication of 'De Revolutionibus Orbium Coelestium' by Nicolaus Copernicus, which was first published in 1543. The revolution can be seen reflected in this work, as it was very academically significant. Very little is known about Federico Saminiati, except that he was an Italian mathematician from a family of Luccan merchants, and that he studied under the Flemish polymath Michiel Coginet in Antwerp. Coignet made significant contributions to cosmography and cartography, and built new scientific instruments, corresponding with the likes of Galileo Galilei about his works and instruments. He invented and described instruments that were similar to a proportional compass, and in 1572 he made a astrolabium. He was a master of the Guild of Saint Luke. He taught French and mathematics up until 1585, at which time he stopped teaching except for classes for officers and the sons of prosperous merchants, which Saminiati may well have been. Prior owner's ink inscription to the title page, one of either side of the vignette, and one to the tail of the page. The inscription to the tail of the page reads 'Joannis Stephani Goletti S. T. D. et Canonici S. Andrea'. A very scarce first edition of this Latin work on astronomy.

In the original rebacked and relined vellum binding. Externally, sound. Some marks and discolouration to the boards and spine, as is usual with vellum. Only part of the original spine is preserved. Lifting of leather to the joints. Edgewear to the extremities, resulting in closed tears and some loss to the fore edge. Internally, firmly bound. Pages are age-toned and generally clean with only the very odd spot. Prior owner's ink inscription to the title page, one of either side of the vignette, and one to the tail of the page, which has offset to the facing page. Prior owner's ink annotation to the margins of pages 5 and 232, presumably noting on the text, not in English.