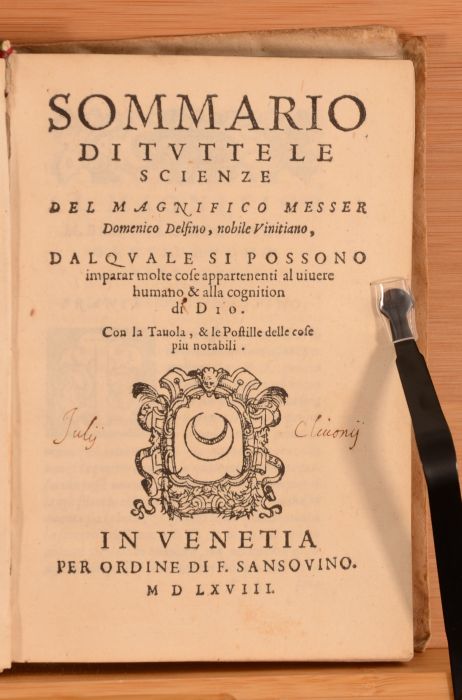 A very scarce work. Written in Italian. Being the second Italian edition of this allegorical work on moral philosophy and the 'seven liberal arts'.This work is an octavo, with the signatures running as *8, A-V8, X7. With a register leaf to the rear. Collated from Jisc from a copy held at the University College London Library, complete. An Italian translation of 'Vision Delectable' by Alfonso de la Torre, which was originally published in Spanish in circa 1440. Though it is a translation, this edition wrongly attributes Domenico Delfino as being the sole author of this work, and was issued as a work of Delinfo's after his death. It seems that the first edition by Torre was so scarce that it became forgotten, and, ironically, in the 1620s, Francisco de Caceres worked on translating Delfino's work into Spanish. Torre was a Pre-Renaissance Spanish poet. His work was supposedly composed in the Court of Navarra for the Prince of Viana, and was thought to have been a response to two questions raised to Torre by Juan de Beaumont, the question of what is the end of man. The work was considered to be one of the summits of Spanish humanism. His work was also influenced by the Jewish philosophical work 'Guide of the Perplexed'. The aim of the work is to be a treatise on human wisdom, and is a summary of many prominent aspects of science, containing chapters focussing on arithmancy, geometry, religion, music, politics, astrology, and many other scientific and academic subjects. The first past deals with liberal arts, metaphysics, and natural science, and the second part looks at moral philosophy. Torre was a bachelor and maybe a Jewish convert. Prior owner's ink inscription to the title page. Ink inscription to the front pastedown, 'Leonardo Trissino, 1822'. Ink inscription to the recto to the front free endpaper, 'IHS Maria, Jesu creator, et saluator Mundi, misererio Nobis; et Vitam aterna, pertua pyssimam misericordia, concede. Ora pro nobis sancta dei genitrix, ut digni efficiamur promissionibus xpi, et de nostric necessitatibus omnibus eruamur. Per xpum num nostru amen. 1594. die sabbth prim January hora 14 puls super plathea piscatoria'. A very scarce full vellum Italian translation of 'Vision Delectable' by Alfonso de la Torre.

In the original limp vellum binding. Externally, generally smart. Some marks and discolouration to the boards and spine, as is usual with vellum. Label and ink to the spine. Light cockling to the boards. Small amount of loss to the spine, and bumping to the extremities. Front hinge is starting but firm. Prior owner's ink inscription to the front pastedown and to the recto to the front free endpaper. Internally, firmly bound. Pages are bright and clean. Small rusthole to leaf C8, touching a couple of letters.