The store will not work correctly in the case when cookies are disabled.
By Edward Byrne et al.
Dublin   H. Fitzpatrick
9.5" by 7.5" [3], 4-11, [1pp]
A very scarce pamphlet of a petition of Catholic emancipation delivered to King George III in January 1793, housed in a custom folding case.
By Edward Byrne et al.

1793 The Petition of the Catholics of Ireland, to the King's Most Excellent Majesty: Presented at St. Jame's, on Wednesday Jan. 2 1793 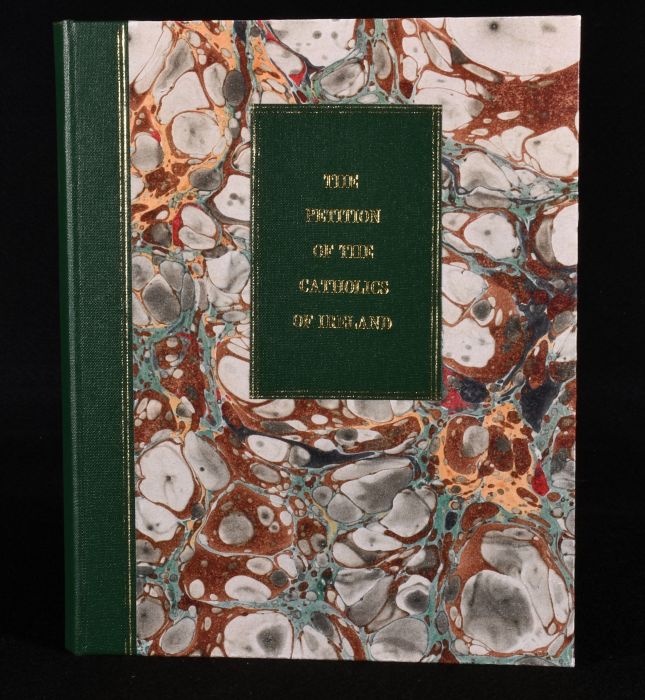 A very scarce work. Not widely held institutionally. Housed in a custom quarter cloth folding case, with marbled paper to the boards. Collated from the ESTC, complete. ESTC citation number T215328. Printed by appointment by H. Fitzpatrick. The signatures for this work run as [1], B5. In this edition the title does not state that notes are annexed, nor are there any notes. This pamphlet is a transcript of the petition made on the 2nd January 1793 by Edward Byrne, John Keogh, James Edward Devereux, Christopher Bellew, and Sir Thomas French. They were presenting a petition in favour of Catholic Emancipation to King George III and Henry Dundas the Home Secretary. The Catholic emancipation was a process in England and Ireland that moved to reduced and remove the restrictions put upon the Roman Catholics. The restrictions had been introduced by the Act of Uniformity, the Test Acts, and the penal laws. This petition led to the 1793 Roman Catholic Relief Bill, which enabled Catholics to take degrees (but to not have full standing), and also gave Catholics the right to vote. Prior owner's ink inscription to the verso of the title page, 'Presented to St. Augustine's Abbey, Ramsgate, by H. Rigby, Esq, of Latchford, Warrington'. St Augustine's Abbey is a former Benedictine abbey in Ramsgate, that was built in 1860. It was the first Benedictine monastery to be built in England since the Reformation.

In a custom quarter cloth folding case with marbled paper to the boards. Externally, the case is smart. Internally, pamphlet is firmly bound. Pages are age-toned and generally clean. Pamphlet has been re-stitched. Prior owner's ink inscription to the verso of the title page. Some spots to the leaves. Tidemark to the last leaf. Leaf B4 is a little closely trimmed to the head, affecting the page number only.