The store will not work correctly in the case when cookies are disabled.
By Joannis de Lugo
Lyons   Philippi Borde, Laurentii Arnaud and Claudii Rigaud
14" by 9" [16], 589, [30pp]
A very scarce work by John de Lugo (1583-1660), a Spanish Jesuit and Cardinal, was an eminent theologian of the Renaissance.
By Joannis de Lugo 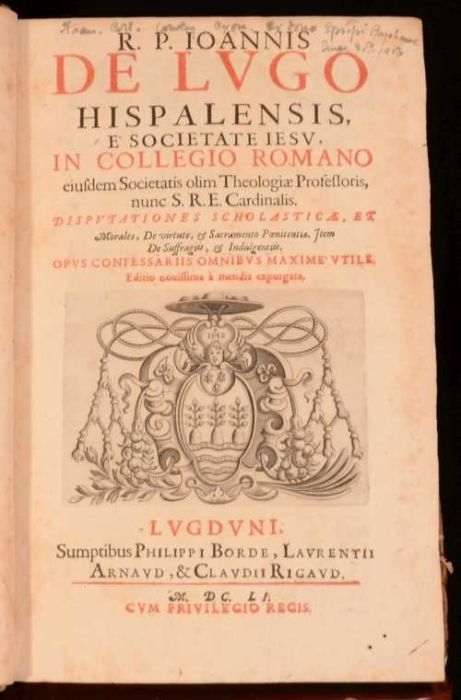 Disputationes Scholasticae, et Morales, De Virtute, et Sacramento Penitentiae. Stem De Suffragiis, et Indulgentis. Opus Confessariis Omnibus Maxime Utile. [Discussions of Scholastic, and Morales, On the Power, he and the sacrament of penance. The Stem of the votes, and his pardon. A work useful to all confessors.]

Reprinted with past mistakes corrected.

With a half title, two colour decorative, title and decorative head and tail pieces throughout.

It is said that John de Lugo's lectures, even before being printed, were spread by copyists in other countries. When the General of the Society ordered him to print his works, he obeyed and without help had the material for the first three volumes prepared within five years (1633, 1636, 1638).

The works of Juan de Lugo, some of which have never been printed, cover nearly the whole field of moral - and dogmatic theology. The first volume, De Incarnatione Domini (Lyons, 1633), of which the short preface is well worth reading to get an idea of de Lugo's method, came out in 1633. It was followed by De sacramentis in genere; De Venerabili Eucharisti Sacramento et de sacrosancto Miss sacrificio (Lyons, 1636); De Virtute et Sacramento poenitenti, de Suffragiis et Indulgentiis (Lyons, 1638); and De justitia et jure (Lyon, 1642), the work on which de Lugo's fame especially rested. In composition of this important treatise, he was greatly aided by his knowledge of law acquired in his younger days at Salamanca, and it was this work which he dedicated and presented to the pope in person and which may be said to have gained for him a cardinal's hat.

What he intended in his writings was not to give a long treatise, exhaustive from every point of view; he wished only "to open up a small river, to the ocean", without relating what others had said before him and without giving a series of opinions of previous writers or furnishing authors or quotations in number; he aimed at adding what he had found from his own reflection and deep meditation on each subject. Other features of his theological conceptions are the union he always maintains between moral and dogmatic theology, the latter being the support of the former, and the same treatment being applied to both, discussing thoroughly the principle on which the main points of the doctrine rest.

In contemporary leather with cords to front board. Externally, worn with loss in places to boards and backstrip, joints starting. Hinges strained. Internally, firmly bound. Bright but with occasional slight foxing, in particular to half title, offsetting from bindings to endpapers and an institutional ink stamp from a Franciscan college to front. With slight evidence of past worming.