The store will not work correctly in the case when cookies are disabled.
By Robert Parsons
Anon   Anon
6.5" by 4.5" [29], 758pp
A scarce second edition of The Christian Directory by Robert Parsons, published in protest against Edmund Buny's Protestant revision.
By Robert Parsons 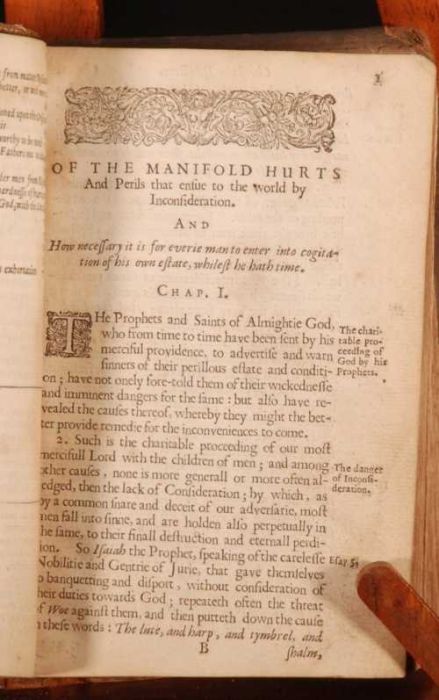 Bound in leather with blindstamped decoration.

Possibly Antwerp but this is conjectured from Wing.

The First Edition was known as The First Booke of Christian Exercise, Appertayning to Resolution.

This edition includes a Preface, "containing certain notes upon a false Edition of the same Book by M. Edmund Buny, together with his Treatise of pacification, and some other matter needfull to be read, before the Book it self."

The title page is missing. Otherwise the work is complete.

With a note on the front pastedown, "[Parsons Jesuit (Robert)] Christian Directorie with reproofe of the falsified edition by E Buny. Two parts in one volume... This is Parsons' original version, enlarged. Lacks lear p305-206. 550. Refers on p755 to this as the 'Second edition'. Only three copies noted in STC."

"During his first months at Rouen he wrote his most influential work, The First Booke of the Christian Exercise, Appertayning to Resolution (Rouen, 1582; revised editions of 1585 and 1607 were known as The Christian Directory... This persuasive and forceful work guided the reader informally along a line of argument roughly equivalent to the initial stages of the Ignatian spiritual exercises. It was immediately recognized by protestants as a dangerously effective means of advancing the recusant cause, to the extent that a Calvinist divine, Edmund Bunny, felt it necessary to issue a heavily edited version, free of all specifically Roman Catholic doctrine and idiom. Bunny's version, A Book of Christian Exercise, Appertaining to Resolution, enjoyed phenomenal success as one of the most frequently reprinted of Elizabethan books, while the Catholic version, invariably called the Resolution, was a standard item in lists of Catholic books secretly distributed in England." (DNB)

Robert Persons, 1546 1610, later known as Robert Parsons, was an English Jesuit priest. He accompanied Edmund Campion, who was later canonized, on Campion's mission to aid English Catholics in 1580. After Campion's capture, torture, and execution, Parsons left England, never to return. He was associated with Cardinal William Allen in his hopes of a swift conquest of England by the Spanish Armada. With the failure of that enterprise, he spent nine years in Spain. Recalled to Rome in 1585, he was professed there 1587 and sent to Spain at the close of 1588. Persons was successful, and then made use of the royal favour to found the seminaries of Valladolid, Seville, and Madrid and the residences of San-Lucar and of Lisbu, which became a college in 1622. Already in 1582 he had founded a school at Eu, in Picardy, in France, the first English Catholic boys' school since the Reformation; and he now succeeded in establishing at St Omer a larger institution to which the boys from Eu were transferred, and which, after a long and romantic history, still flourishes as Stonyhurst College at Stonyhurst. He had hoped to succeed Allen as Cardinal on the latter's death. Unsuccessful, he was rewarded with the rectorship of the English College at Rome, the most important seminary for English Catholic priests.

In a full calf binding. There is wear to the extremities, including bumping and rubbing. The binding is loose in places. The front board and front endpapers are detached and the rear inner hinge is strained. Pages 305-206 are missing. At least the first twelve pages, pages 355-366 and 756-758 are partially detached. Internally the pages have slight browning and background tidemarks to the page edges, with spots and handling marks. Pages 317-320 and 755-758 have small marginal blackening. The first page has a small closed tear and ink marks. There is an ink inscription on the front blank.