The store will not work correctly in the case when cookies are disabled.
By Various
London   The Illustrated London News
16.5" by 12"
A vanishingly scarce continuous run of the highly influential Victorian periodical The Illustrated London News, replete with many highly desirable folding plates and illustrations and covering some of the most important events of the nineteenth century.
By Various

London   The Illustrated London News
16.5" by 12"
A vanishingly scarce continuous run of the highly influential Victorian periodical The Illustrated London News, replete with many highly desirable folding plates and illustrations and covering some of the most important events of the nineteenth century.
£77,000.00
: 200kgs / : 676K19
Add to Wish List 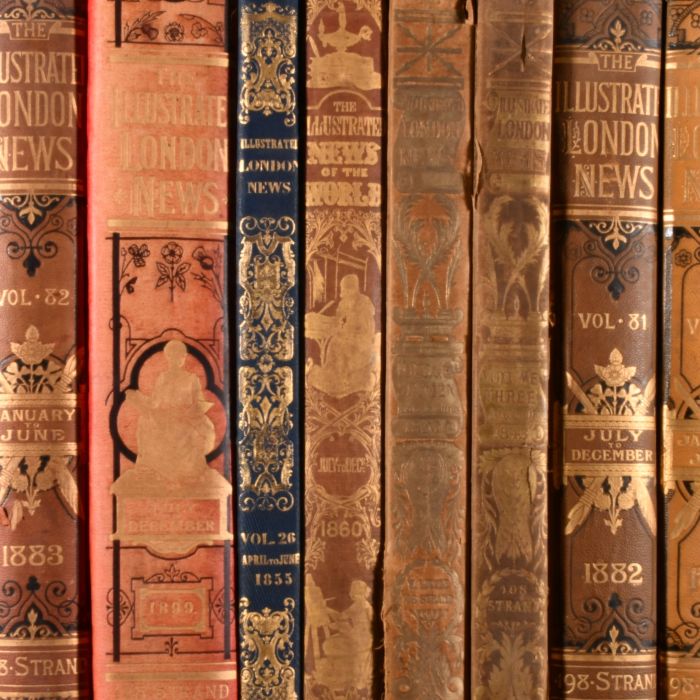 Folio. A vanishingly scarce continuous run, being volumes 1-138 published between 1842 and 1910. In the original highly decorative publisher's cloth binding. Copiously illustrated throughout in colour and monochrome, with many of the highly sought after city panoramas including Edinburgh, Dublin, Paris and Rome present. As is common with this work, many of the folding plates have been removed, however, the work is still highly illustrated throughout with many of the folding plates and panoramas remaining. The highly sought after July-December 1878 volume, known as the Cyprus volume, is present. Please note that due to the scale of the set, a complete collation is not available here, although we would be happy to offer further information and collation as required. The Illustrated London News was the world's first illustrated weekly newspaper; the first issue appeared on Saturday 14 May 1842. Printer and newsagent Herbert Ingram moved from Nottingham to London in early 1842. Inspired by how the Weekly Chronicle always sold more copies when it featured an illustration, he had the idea of publishing a weekly newspaper that would contain pictures in every edition. By 1863 The Illustrated London News was selling more than 300,000 copies every week, enormous figures in comparison to other British newspapers of the time. The work rose to fame following its publication of the designs for the Crystal Palace in 1851 and of the funeral of the Duke of Wellington.The work is credited with moving illustrations from purely a satirical device in mainstream news, to a credible and factual reporting tool, publishing over 750,000 illustrations during its existence. Important historical moments to these volumes include The Great Exhibition of 1851, 'The New Church of St Nicholas, Hamburg' Queen, Queen Victoria visiting Germany, The Beethoven festival, Pilbrow's atmospheric railway, the burning of the Bowery Theatre New York, the funeral of the Duke of Cambridge, 'Visit of the Queen and Prince Consort to The Emperor Napoleon at Paris 1855 ', Sir Allen William Young's 1876 expedition on the 'Pandora' for which he received a knighthood in recognition of his services, the death and funeral of the Prince Imperial, Louis-Napoleon Bonaparte, The Phoenix Park Murders and the departure of Sir John Franklin on what is now known as his 'Lost Expedition' to the second volume at page 328. There is also extensive coverage of the Zulu war and other military conflicts in addition to the sections of sheet music and general newspaper puzzles. Volume LVI contains notable articles including the plans for the proposed Channel Railway Ferry, plans relating to The Amsterdam Ship Canal and the obituary for influential Private Secretary General Charles Grey. Volume LVII is notable for its discussion on the Franco-Prussian war of 1870, including a portrait and article relating to General Vogel Von Falkenstein, a Prussian General der Infanterie. The work also contains an engraving of the Town of Mezieres, which was greatly impacted by the conflict and wounded soldiers in the Gardens of Versailles. The work also contains a charming two page engraving showing the Opening of the Thames Embankment. An impressive continuous run of the highly influential Victorian periodical, The Illustrated London News, containing many highly important references to British history, as well as many charming and highly desirable plates.

In the original publisher's cloth binding with gilt detail. Volume 2 of 1874 has been rebound in morocco. Externally smart with rubbing to the joints and extremities. Marks to the occasional board. The very occasional volume, including volume 55 is lacking the back strip although the majority remain present and very smart. The occasional patch of damp staining to the boards, including to volumes 57, 59 and 44. Due to the weight of the volumes, hinges are strained. Text block detached from binding to volume 102. Internally most volumes are generally firmly bound. Pages are generally bright with age toning and scattered spotting heavier to the extremities and the fore edge. The occasional volume has significant closed tears, including closed tears and loss to volumes 55. Writing to the fore edge of volume 55. The occasional tide mark, including to volume 44. Loss and closed tears to several of the folding plates and panoramas. Many pages are closely cropped with the occasional loss to the text. Many plates, including plates and panoramas have been removed. Additional condition notes can be sent across at request.