The store will not work correctly in the case when cookies are disabled.
By Edmund Burke; Various
London   Baldwin, Cradock, Joy et al
9" by 6"
An exceptionally handsome library set of the long-established and noted periodical 'The Annual Register'. This lengthy run contemporaneously covers many important periods of history including the Napoleonic Wars and the American Independence.
By Edmund Burke; Various

London   Baldwin, Cradock, Joy et al
9" by 6"
An exceptionally handsome library set of the long-established and noted periodical 'The Annual Register'. This lengthy run contemporaneously covers many important periods of history including the Napoleonic Wars and the American Independence.
£29,000.00
: 30kgs / : 661L1
Add to Wish List 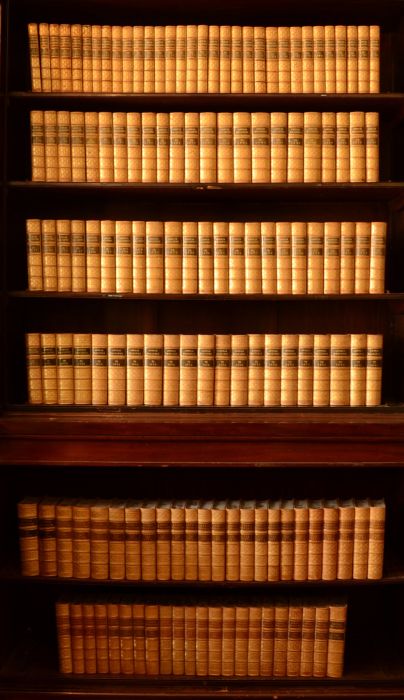 An important original source for historical events, society and literature of the eighteenth to twentieth centuries. Uncommon to find such a long run in a lovely leather binding. Varying editions, with volumes 24, 56, 60 , 61, 64, 56, 70, 67, 68, and 70-144 all being first editions. Other volumes vary from the second edition onwards. Comprising of 143 volumes of the Annual Register, and the Index Volume. Being Volumes I-138 and 140-144. Lacking volume 139 for the year 1897. Volume 62 is bound across two books as called for. This library set therefore comprises of 145 physical books. 'The Annual Register' was first written in 1758 under Edmund Burke's editorship and published by James and Robert Dodsley. Binder's stamp to the verso of front endpaper to volume 54, 'Hayman'. The Index volume is for the works from the year 1758 to 1819. Volume 105, for the year 1863 is the start of the 'New Series' of the Annual Register. Some volumes and sections of note include Burke's lengthy historical essay on the Seven Years' War, Volume 19 (for the year 1776) which covers the events of the American Revolutionary year and has the American Declaration of Independence pp 261-70. This edition also has reviews of popular books from that year including Gibbon's Decline and Fall of the Roman Empire and featured the first published mention of Adam Smith's Wealth of nations p 241-243. This review is titled 'An Enquiry into the Nature and Causes of the Wealth of Nations.' Other editions regarding the American Independence includes volume 21, (the 1778 issue) which discusses the Consequences of the American war following their Independence. Volume 29 (for the year 1787) has an early printing of the United States Constitution as well as a plan of the new constitution and parts of the constitution itself. This volume is a second edition. Volume 24 (for the year 1781) has several interesting features including the Expedition against Charlestown, articles on discontents in Scotland and a retrospective view of affairs of Europe in 1779. This 1779 volume is a second edition. Volume 25 of 1782 has a retrospective view of affairs in Europe to the close of the American Revolutionary war in 1781. Other political affairs discussed include the second attempt of France upon the Island of Jersey. The volume for the year 1812 has writings on the Peninsular War, Arab Pirates and the Opening of Drury Lane Theatre by Byron. There is also a feature on the assassination of Spencer Perceval. Perceval is the only British prime minister to have been assassinated. In addition to this there is a large section on the War of 1812. Other important volumes include the ascension of Queen Victoria to the throne in 1837, the death of Prince Albert in 1861 and Queen Victoria's death in 1901. Volumes 104 onwards are in a lovely condition, with minor shelfwear and just the occasional light tidemarks to the boards of the odd volumes. A beautiful library set of this important reference title. A collection which spans 143 years of worldwide political affairs, history and literature.