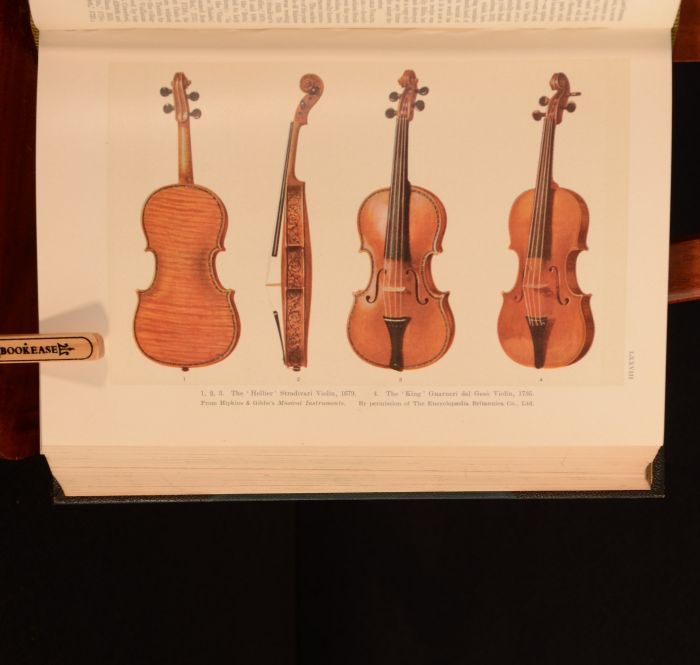 First published in four volumes (in 1879, 1880, 1883 and 1889) and edited by the notable English writer on music, George Grove, 'A Dictionary of Music and Musicians' was at the time of its publication the largest reference work on Western music. The popularity of the text led the work to be reprinted a number of times under the title 'Grove's Dictionary of Music and Musicians', going through several editions since the 19th century, edited by notable English writers on music such as Eric Bloom, and in this copy, Henry Cope Colles. To this day, the encyclopedic dictionary remains one of the largest reference works on western music, rivalled only by the German text, 'Die Musik in Geschichte und Gegenwart'. George Grove was not only the founding editor of 'Grove's Dictionary of Music and Musicians' but also the first director of the Royal College of Music, from its foundation in 1883 until his retirement in 1894. Throughout this period, Grove focused the College's attention on two main activities, practical training and examining in an attempt to raise the standard of orchestral playing by replacing the existing ad hoc methods of apprentice-based training, private lessons, or study abroad. This development attracted many students and the high standard of playing at the College quickly became known, with leading musicians such as Joseph Joachim and Hans Richter willingly appeared with the College orchestra. Grove's influence on the RCM has be noted as a major turning point for musical training in Britain, and his influential can still be seen to this day. Henry Cope Colles, was an English music critic, music lexicographer, writer on music and organist. He is best known for his numerous years as the chief music critic of 'The Times' (1911–1943) and for editing this volume of 'Grove's Dictionary of Music and Musicians'. Collated, complete with numerous monochromatic vignettes and ninety six plates, twenty four of which are in colour. Scarce in its entirety. Featuring publisher's advertisements to the rear of volume I and a loosely inserted advertisement for 'Books on Music Suitable for Prizes or Presentation' by 'The Associated Board of the Royal Schools of Music' between page 60 and 61, volume II. Containing a loosely inserted coloured folding plate to volume III: a 'Periods (or Schools) of Musical Composition' timeline, detailing notable composers, their respective musical styles and periods, and their geographical location in the world. Uniformly bound in a lovely half morocco binding with gilt detailing to the boards and spine.

In a half morocco binding. Externally, excellent. Very minor rubbing to extremities and head and tail of spine. Faint handling mark to lower extremity, front board, volume I. Small mark to front board, volume IV. Marking to leather, upper fore edge, volume V. Slight rubbing to cloth, upper and lower extremity of front board, volume V. Slight rubbing to spine, volume V. Offsetting to endpapers. Prior owner's ink inscription to upper fore edge of front pastedown and front free-endpaper, and lower fore edge of front free endpaper, all volumes, dated '27:3:38'. Internally, firmly bound. Pages very bright and clean throughout. Very small ink mark to page 126, volume I, not affecting the text. Spot to page 239, offset to verso of plate V, volume I. Closed tear to fore edge, page 631, volume I. Loosely inserted advertisement for 'Books on Music Suitable for Prizes or Presentation' by 'The Associated Board of the Royal Schools of Music' between page 60 and 61, volume II.