London   John Murray
9" by 6" xiv, [1], 608, [1], 32pp
An exceptional and very smart copy of David Livingstone's seminal work on his expeditions in Africa. The first edition of this work, in the original maroon cloth binding - uncommon in such a smart condition and in the original cloth.
Sold
: 1.5kgs / : 655L13 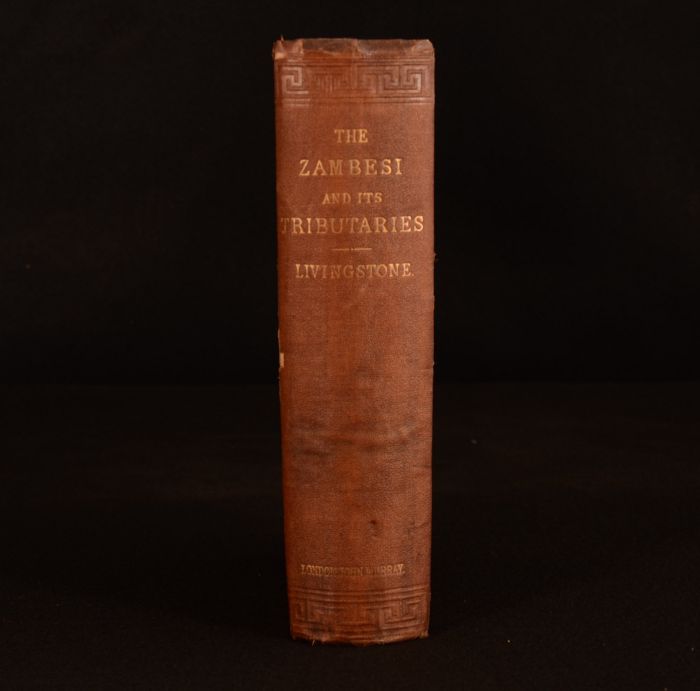 A first-hand account of the Zambesi expedition by the famed Victorian explorer David Livingstone. Livingstone is regarded as one of the most popular British heroes of the latter half of the nineteenth century. He was seen as an anti-slavery crusader and his exploration of Southern and Central Africa were pioneering. This mission was to explore the Zambesi river's mouths and tributaries in order to navigate the waterway to the interior. The expedition lasted six and a half years total before it was recalled due to costs. Livingstone's account of his time in Africa is beautifully complemented by a folding frontispiece, five plates, a folding map and a further twenty-nine vignettes. Collated, complete. Livingstone notes that this work and journey was 'As clear an account as I was able of tracts of country previously unexplored, with their river systems natural productions and capabilities'. The expedition was difficult, and many expedition members noted that Livingstone was an inept leader. The physician of the group, John Kirk, wrote that Livingstone was an unsafe leader and 'out of his mind'. By 1864 the journey was halted due to the increasing cost and the failure to find a navigable route. Many newspapers brandished the expedition a failure, despite the valuable collections of botanical, ecological and ethnographic material collected over this time. A scarce account of Livingstone's second expedition.

In the publisher's original cloth binding. Externally, smart with minor bumping to the head and tail of spine and to the extremities. Spine has faded, as is common with this work. Front hinge is lightly strained but remains firm. Internally, generally firmly bound though with slight straining in places. Pages are bright. Large folding map to the rear has suffered a few light creases. The odd spots to pages.