1876 The Mysterious Island The Secret of the Island [With] Abandoned 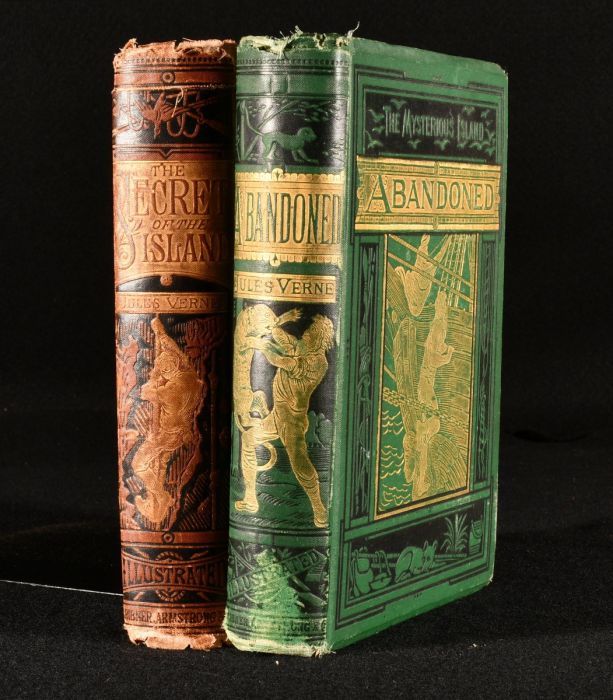 Comprising of two of the three volumes that were published. The English language translation of ‘The Mysterious Island’ was first published in London in September 1875. This American edition was issued using the same sheets as the British edition, in November 1875. The work was published as ‘Dropped from the Clouds’, ‘The Abandoned’, and ‘The Secret of the Island’.

This set comprises of ‘Abandoned’ and ‘The Secret of the Island’ only.  Lacking ‘Dropped from the Clouds’.

Very scarce to have multiple volumes of this work together.

This translation is purported to be W. H. G. Kingston, the noted author of boy’s adventure novels. However, it has now been established that the true translator was his wife, Agnes Kinloch Kingston. In the English translation the protagonist’s name has been changed from ‘Smith’ to ‘Harding’.

‘The Mysterious Island’ is set during the American Civil War. Five Northern prisoners of war escape during the siege of Richmond, by hijacking an observation balloon. The novel follows their adventures.

‘Abandoned’ is lacking the ‘Flotsam and Jetsam’ plate.

Prior owner’s inscription to the recto of front endpaper, Edward W Farnham from George Christmas 1875.

In the publisher’s original cloth bindings. Externally, sound, with bumping and light rubbing to the head and tail of spine as well as to the extremities. Small split to the cloth at the head of spine to ‘Secret of the Island’. Light tidemark to the front board of ‘Secret of the Island’. Prior owner’s inscription to the recto of front endpaper. Front hinge to ‘The Secret of the Island’ is strained but firm. Rear hinge to this same volume is tender. Internally, binding is loosening in places to both volumes. Pages are bright, occasional light spots and minor chips to page edges.