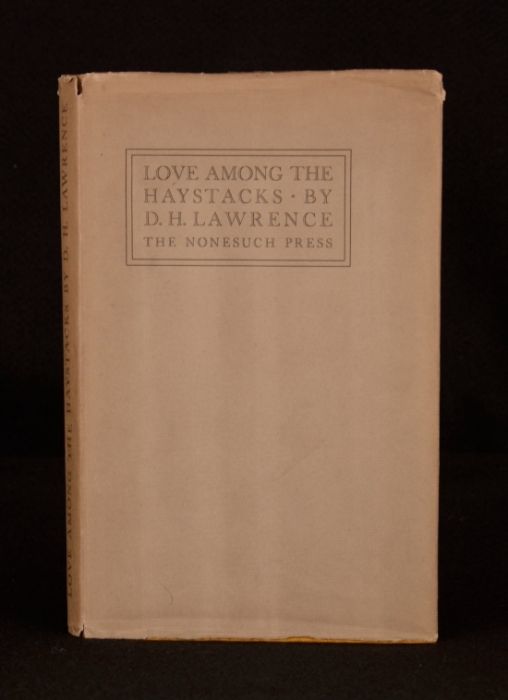 Nonesuch Press Limited Edition. Richard Aldington called Lawrence, "one of the most original and interesting persons of his time." He is widely regarded as one of the most significant and influential writers of the 20th century. He became known for his contraversial portrayals of sexuality, most notoriously in the novel Lady Chatterly's Lover. It was partly to avoid his public portrayal as a pornographer and partly on account of his delicate health that he returned to Italy, where he died in 1930. This collection was published posthumously. Soon after his death his reputation was rehabilitated. The influential critic F. R. Leavis insisted on his integrity and morality, and did much to place Lawrence's fiction within the "great tradition" of the English novel. These stories were originally written in 1912, when David Garnett, then the son of a publisher, first met Lawrence. He published hem posthumously, along with an introductory reminiscence of that meeting. It is a touching and fit tribute to the stories; concluding his visit Garnett says, "when we stopped and said goodbye he said something about not needing me to repay the money I had borrowed for my fare home. It was dark, there was a smell of flowers, and Lawrence's light feet were noiseless in the dust of the road." This edition was limited to 1600 copies, and is printed on Auvergne hand made paper. This is number 199. Direct from the library of the late Hugh Selbourne MD (1906-1973) a noted book collector and diarist.

In the original cloth with the original dustrwapper. Externally excellent with almost no shelf wear. The dustwrapper is sound, just somewhat age-toned and with small closed tears around the head and tail of the spine, and along the top edge of the rear. The foredge of the text block is untrimmed but still reasonably clean. Internally generally clean and bright, and firmly bound.