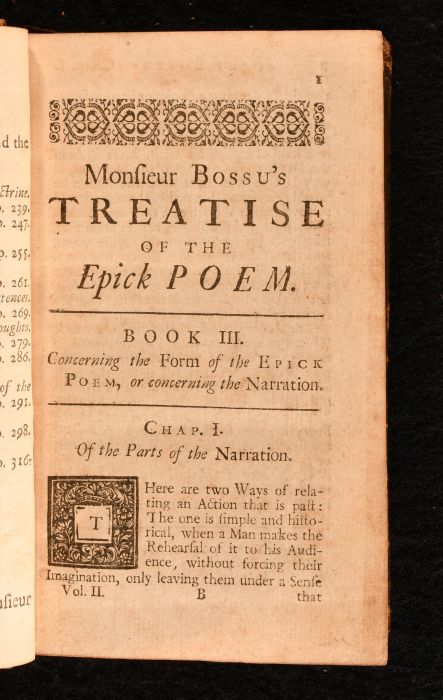 The hugely influential work by Bossu, which set the tone for criticism of the Heroic Poem in both France and England for the next century. French critic and poet Nicolas Boileau-Despreaux found this book extremely informative, and praised it highly. The leading doctrine of this criticism is that the subject of a poem should be chosen before the characters, and that all action should be arranged without reference to the personages in the scene. Rather scarce. ESTC reference no: T116243. Prior owners' bookplate to the front pastedown, Panshanger. This is from the library of Panshanger House, demolished in 1954 due to the lack of an heir. Part of the estate was sold earlier in 1919 to Ebenezer Howard a pioneer of the Garden City movement and is now Welwyn Garden City. The house and 89 acres was sold to a demolition contractor for £17750 in 1963. The site is now owned by Lafarge Cement and Aggregates and used for gravel extraction, a sad end. To the verso of front endpaper there is a bookplate for Robert J Hayhurst. Robert J Hayhurst was a keen collector of eighteenth century literature. He inherited the retail pharmacies, John Hayhurst and Son, based in Nelson, Lancashire. Complete, in two volumes. With publisher's adverts to the rear of volume I. The second edition of this English translation. With a lengthy introduction by the translator and a memoir of the author by P F Le Courayer. Le Courayer was a French theological writer. A smartly bound copy of this important analysis on epic poetry.

In a contemporary calf binding. Externally, generally smart. Rubbing to the spines, resulting in minor loss. A few light marks to boards. Bookplate to the front pastedowns, 'Panshanger'. Prior owner's bookplate to the recto of front endpaper of volume I, Robert J Hayhurst. Internally, firmly bound. Pages are generally bright with scattered spots to pages.