The store will not work correctly in the case when cookies are disabled.
By Charles Dickens
London   Bradbury and Evans
8.5" by 5.5" xvi, [1], 2624pp
A stunning first edition, first issue copy of this noted Dickens novel, 'Bleak House.'
By Charles Dickens 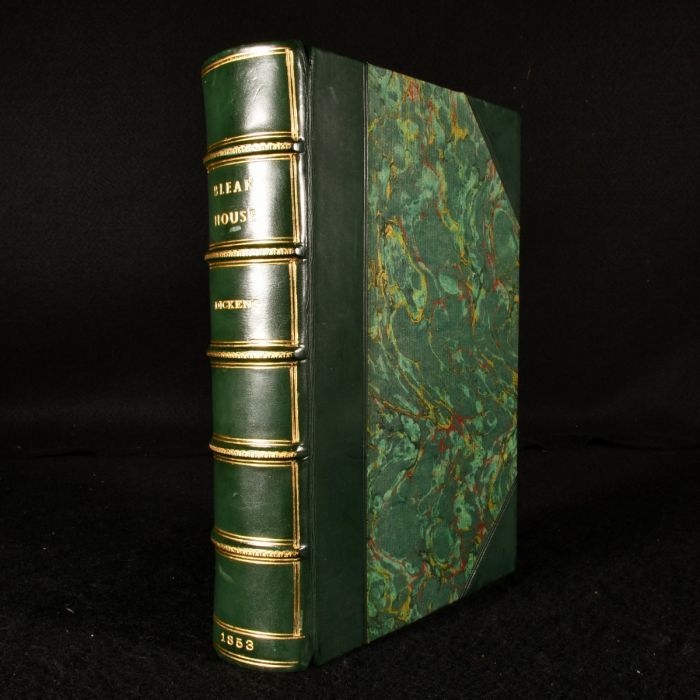 With a frontispiece, and thirty eight plates, including the ten dark plates.  Illustrated by Hablot Knight Browne, also known by his pen name ‘Phiz’. Browne was an English illustrator who illustrated ten of Charles Dickens' books, including 'David Copperfield', and 'Dombey and Son'.

Gift inscription to the recto of front endpaper, 'Given to Ronald wilson by Agnes Hibbert of Calgary Canada. In Memory of her Husband Reginald Morley Hibbert January 1968'.

‘Bleak House’ is narrated by Esther Summerson, describing her house of Bleak House, where she goes to live under a new guardian, Mr Jarndyce. At the heart of the novel is a long running legal case, Jarndyce and Jarndyce, in the Court of Chancery. The case surrounds a number of several conflicting wills written by the same person. This case was probably inspired by the Thellusson vs Woodford case, a will which was read in 1797, and was contested and not determined until 1859. The novel actually held support a judicial reform, in the form of the 1870s Judicature Acts.

Charles Dickens is possibly the most well-known Victorian author, with his fifteen novels still being widely read and performed, as well as being studied in school and enjoyed by people of all ages.

An excellent copy of this noted Victorian novel.

In a half calf binding, with paper covered boards. Externally, excellent. Gift inscription tipped in to front endpaper. Internally, firmly bound. Pages are generally bright with just the odd light spots. A very bright copy of this work.