The store will not work correctly in the case when cookies are disabled.
By Xenophon; Johannes Leunclavius
Francofurti   Andreae Wecheliheredes
14" by 9" [12], 647, [3], 651-852, [28], 853-1013, 1014-1213, [29]
An uncommon edition of the ancient Greek philosopher Xenophon's writings. This sixteenth century edition has retained its brightness, and has the text in both Latin and the original Greek presented in parallel columns.
By Xenophon; Johannes Leunclavius 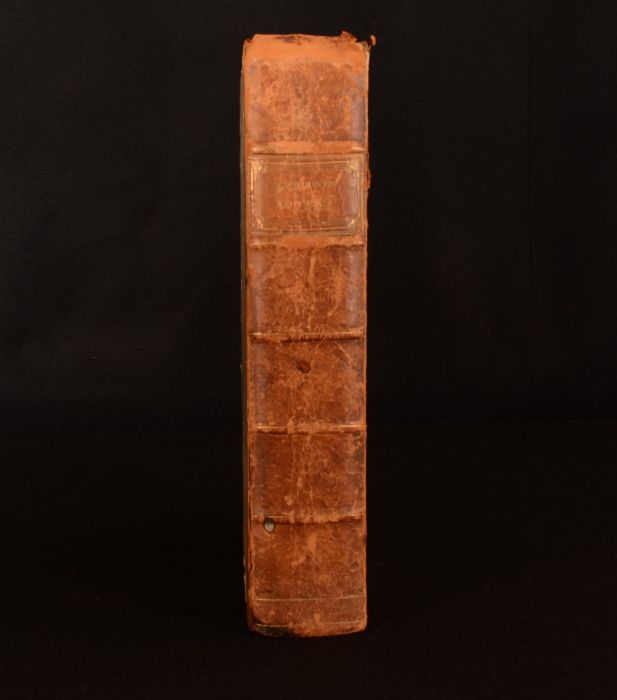 This copy has fascinating provenance, as it holds the bookplate of William Stirling of Keir House. It is possible that this is either the bookplate of Sir William Stirling Maxwell or the architect William Stirling II. Sir William Stirling Maxwell was a Scottish historical writer and art historian. The family motto is to the bookplate, which shares a name with the British Thoroughbred racehorse and sire 'Gang Forward'. Gang Forward was bred by one William Stirling Crawfurd who named the horse after the motto of Clan Stirling. He was successful in ten races and was one of the best colts of his generation. Rebound, in a nineteenth century binding. This editorial of the great Xenophon's writings is by Johannes Leunclavius. Leunclavius was a German historian and orientalist, he edited the works of many classical authors and held a specific interest in Turkish history. This work is a selection of writings by Xenophon taken from larger titles. Here, several chapters or sections have been included from wider works. For example there is 'De Venatione' which appears to have been taken from his 'Cynegeticus'. The first 'Tomo' contains book eight of his 'Cyropaedia' and book seven of 'Anabasis'. The second 'Tomo' contains the biography 'Agesilaus', part of the 'Polity of the Lacedaemonians', his writings on the Athenian constitution, books III and V of his 'Oeconomicus', 'Hiero', 'Rationes Reditum' which may have been taken from his 'Ways and Means', 'De re Equestri', 'De Megisterio Equitum', 'De Venatione' and 'Epistolarum Fragmenta'. This work also contains a large appendix. The second part of this work has a separate title page, but continuous pagination and signatures. The title page to the second part is 1594, as called for. Pages 1014-1213 are in columns. One of the Indexes has been bound between pages 852 and 853 rather than at the end. With a printer's device depicting Pegasus with the initials A W on both title pages, repeated twice at the end of part II, after the first index and to the final leaf. Xenophon was an ancient Greek philosopher, historian and student of Socrates. His works span several genres and is written in plain-language Attic Greek. A bright copy of this selection of Xenophon's works.

In a half calf binding, with paper covered boards. Externally, sound with slight rubbing to the joints and extremities. Particularly heavy rubbing to the spine. Front board has been damaged slightly, which does not affect the structural integrity. Prior owner's bookplate to the front board. Internally, firmly bound. Pages are unusually bright with just the odd spots. The binding affects the overall condition of this work.