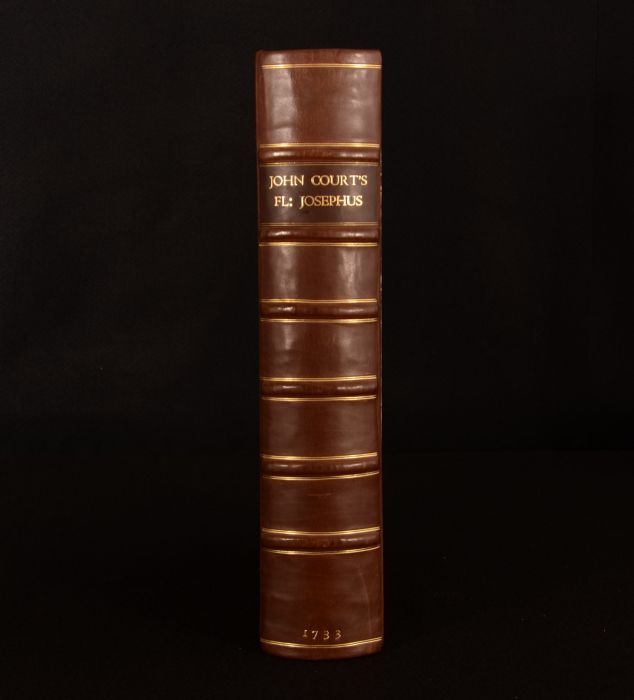 With an engraved frontispiece of Josephus. Josephus' historical works drew a strong focus on the first century CE and the First Jewish-Roman War 66-70CE. He fought in this war as head of Jewish forces in Galilee before fully defecting to the Roman side later. Josephus' two most important works are present to this volume, his 'History of the Antiquities of the Jews' and 'The Wars of the Jews'. The former recounts the history of the world from a Jewish perspective aimed at a Greek and Roman audience. The latter reflects on the Jewish revolt against Roman occupation. With an autobiographical account of Josephus' life. The final title to this volume is 'Against Apion' which is a polemical work written as a defense of Judaism in the context of philosophy and it as a classical religion. This is a contrast to the sophist Apion's criticisms. ESTC reference no. T106244. Pages 355-356 and 353-354 have been bound in the incorrect order. Collated, this work has been bound without the final appendix and ends at the index. The conclusion of this work is to have 46 unnumbered pages according to the ESTC and this copy only has 24. This English translation by John Court is based on John Hudson's edition. The classical scholar, John Hudson, produced many editions of the works of classical authors including Thucydides and Velleius Paterculus. His edition of Flavius Josephus' works was published posthumously by his friend Anthony Hall in 1720. In addition to Josephus' main five writings, this edition also has a 'Dissertation on the Writings and Credit of Josephus' which was written by Francois La Motte le Vayer, whom had admission to the Academie Francaise and was the tutor of Louis XIV. Following this there is also Christopher Noldius's 'History of the Life and Actions of Herod the Great' in addition to explanatory notes and tables. Illustrated, with engraved plates depicting 'Noah's Ark', 'The Tower of Babylon', 'A Map of the Holy Land', 'The View of the Inside of the Temple of Solomon', 'Solomon's Temple', 'The Wars of the Jews', 'The Destruction of the Temple', 'The Mother and Seven Sons Before Antiochus', in addition to two more unnamed plates to pages 58 and 60. Therefore, this work has a frontispiece and ten plates. A nicely bound copy of Josephus' works.

Rebound, in a half calf binding with paper covered boards. Externally, in an excellent condition with minor shelfwear. Prior owner's copperplate inscriptions to the verso of front endpaper. Internally, firmly bound. Tape repairs to pages 123-126 with some loss to the text. Folding plate of Jerusalem has several tape repairs to the rear at the bottom and reinforcements to the folds. Tape repairs to 'The View of the Inside of the Temple of Solomon' and 'Solomon's Temple' at the rear, acting as a reinforcement. Loss and tape repairs to pages 779-788 mostly to the bottom third of the page and to the text nearest the fore edge, with the largest loss being several words across 25 lines. The fore edges to these leaves have also been reinforced/repaired. Pages are generally bright, with just the odd spot.