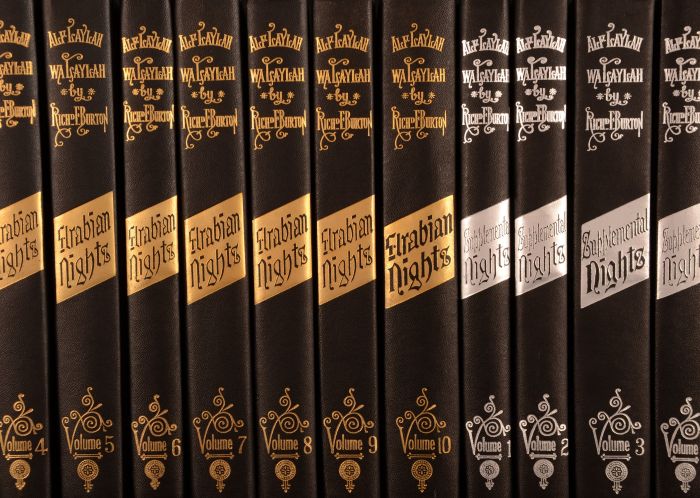 Complete in sixteen volumes. 'Arabian Nights', or 'One Thousand and One Nights', is a collection of folk tales from the Middle East. It was collected over centuries, with the roots of the tales being traced from Greek, Indian, Arabic, Persian, Turkish, and Jewish folklore. The tales are being told by Scheherazade to the King Shahryar, in a bid to save her life. After discovering his wife was cheating on him, he killed her, and vowed to marry a new virgin every day, and then behead them the next. In this vein, he had killed one-thousand and one women before marrying Scheherazade. Scheherazade entices the King by telling him a story on their first night together, pausing halfway through as the sun came up. The King, being absorbed by the story, keeps Scheherazade alive, eager to hear more from her. This translation is by Richard Burton. Burton's translation is celebrated, but was only able to be printed in subscribers-only editions upon the publication, due to the sexual content in the tales, which were frowned upon at the time. He published under the 'Kama Shastra Society' to avoid the consequences of the Victorian obscenity laws. He travelled widely in Asia, Africa, and American, as was a very talented linguist, being able to speak twenty-nine languages, including French, Romani, Saraiki, Arabic, Persian, Sanskrit, Portuguese, Swahili, and Hebrew. The 'Burton Club' was a series of editions of Burton's 'Arabian Nights'. Many editions were published in the early twentieth century, being printed in the US, but many of them are undated. With a frontispiece to each volume. All volumes are undated, dated using Worldcat. Collated, complete.