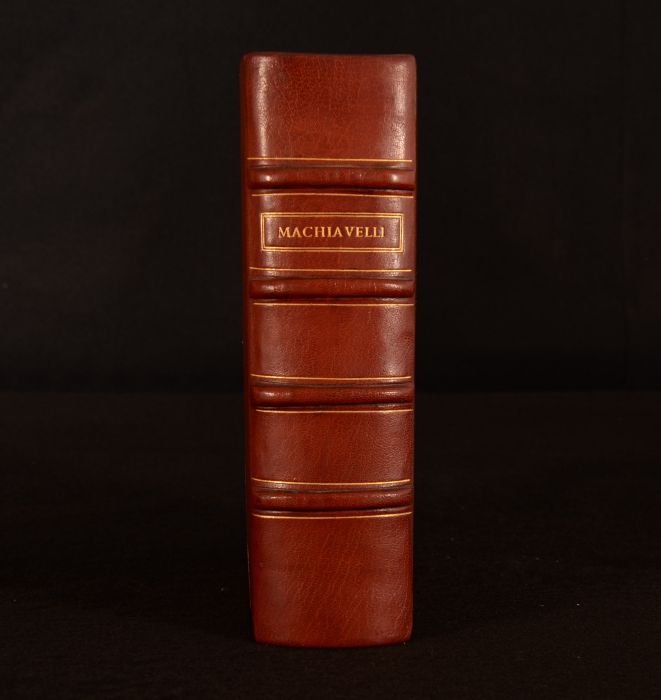 A scarce printing, with very few available copies with the plain half-titles between each section. In a smart half morocco binding. In Italian. This copy matches Ebert's first of the five printings of this work he references. It was established by Gamba that this work was published in Geneva rather than Rome as previously thought by the likes of Brunet. The printing location was established using the paper and printing style. The main title page for this work (though lacking in this copy) is dated 1550 and the consensus is that this copy, and the four others under this imprint were actually printed later. The British Library Short-title Catalogue of Italian Books Printed in Italy 1465-1600 suggests that this work was actually published 1610, 1620 or 1640. According to Ebert, this is the 1st of the five printings of this work published in Geneva. It It has half-titles for each section rather than a full title page. This appears to be one of the 'Testina' editions, named so due to the vignette head that was to the main title page and to each separate title page in subsequent editions. Machiavelli's works were often mis-dated, and dated in a retrospective manner because there was a papal ban on Machiavelli's works in 1568. This 'Testina' edition is a particularly fascinating bibliographical case due to the falsified date, the difficulty to identify variants, and the numerous rearrangements of the text. Collated, this copy has been bound without the general title page and the following leaf which is the contents. The rest of the collation matches other copies of this edition online, which is its identifying feature. With the final blank present. Illustrated, with the double page woodcut illustration to 3Q2-3Q3. It is believed that this work was published in Geneva, although there is contention that it was published in Rome by Antonio Blado who had the exclusive permission of Pope Clement VII to print Machiavelli's work. Machiavelli is regarded as the father of modern political philosophy and political science. This work is five parts in one, comprising of: Part I: Historie Fiorentine, Part II: Il Principe di Nicolo Machiavelli.. La Vita di Castruccio Castracani.. Il Modo Che tene Il Duca Valentino, Part III: Discorsi Sopra la Prima Deca di Tito Livio Part IV: Dell'arte della Guerra. Part V: L'Asino D'Oro. This copy also has the privilege of Clemente VII. The second part of this work, his 'Il Principe' is his best known work. 'The Prince' is a political treatise and is often claimed to be one of the first works of modern philosophy, particularly political philosophy. It is this work that is most responsible for the word 'Machiavellian' to be used in a pejorative manner. An uncommon, early imprint of this great philosopher's works.

In a quarter morocco binding with paper covered boards. Externally, very smart with patches of rubbing to the boards. Internally, firmly bound. Chips to the extremities of the first few leaves. Several light marks to the fore-edge. To the running title of x3 to the second part there is a 1cm diameter ink spill. Pages are slightly age toned with just the occasional scattered spots to pages.