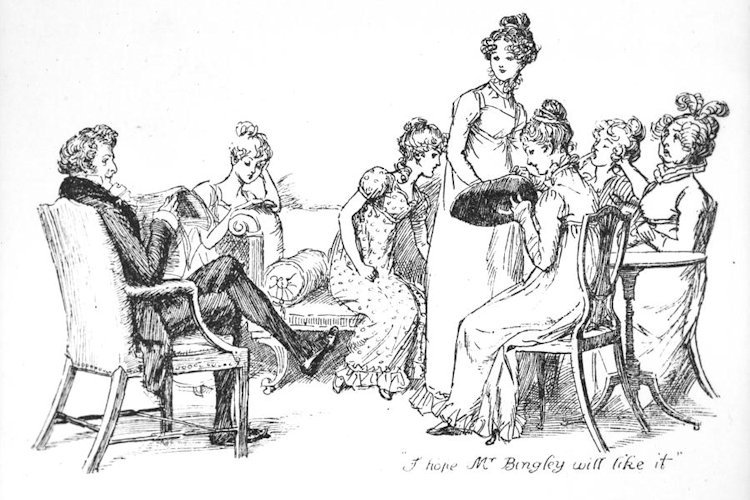 The Illustrations of Hugh Thomson

This month we are focusing upon the Irish born illustrator Hugh Thomson. Whilst Thomson had no formal artistic training, his pen-and-ink illustrations in works by authors such as Jane Austen, Charles Dickens and J. M. Barrie are synonymous with the works themselves. Thomson began his career working for the British publishing company Marcus Ward and Co, who are best known for their highly illustrated works for children and adults, as wells as their decorative greeting cards. Thomson joined the company at just seventeen but soon became an influential figure within the company. In 1883 Thomson became a leading contributor to The English Illustrated Magazine, collaborating with other well-known authors such as Randolph Caldecott and Herbert Railton. In 1911, Thomson and his family moved from London to Sidcup due to illness. During WWI, Thomson’s work changed, and he began producing a number of propaganda pamphlets alongside private commissions. He passed away in 1920.

Thomson’s pen-and-ink style was utilised in a variety of literary works. Perhaps his most successful contribution was to Mrs Gaskell’s ‘Cranford’. The popularity of this edition led to other publishers also producing a series of books in the distinct highly decorative green cloth binding. The success of Cranford also led to Thomson being asked by George Allen and Co to produce a series of illustrations for Pride and Prejudice. His illustrations were again a huge success and in the first year of publishing sold over 11,000 copies. Thomson later went on to illustrate Austen’s five other novels, this time commissioned by Macmillan and Co.

We have a wide variety of works that feature Thomson’s illustrations. Below are a few examples of his wide scope of work, all with his distinct artistic style.

This attractive copy of Peg Woffington by Charles Reade contains many of Thomson’s decorative vignette illustrations. This particular copy is exceptional in that it also contains a handwritten note by from the author tipped in to the front pastedown. Reade was a renowned English novelist and dramatist. The work is also bound in a charming half morocco binding.

The Ballad of Beau Brocade by Austin Dobson

The first edition, first issue of this charming poetry collection by Austin Dobson. Held in the extremely scarce, and very well preserved, nineteenth century dustwrapper. The first edition, first issue, with 'The long day lengthens' in the dedicatory poem. Held in the extremely scarce unclipped dustwrapper. With twenty-five plates and numerous in-text illustrations by Hugh Thomson. Henry Austin Dobson, was an English poet and essayist.  Hugh Thomson was an Irish Illustrator remembered for his pen and ink illustrations.

A lovely, illustrated edition of this popular Victorian novel. Illustrated throughout by popular Irish born illustrator, Hugh Thomson. Thomson's pen-and-ink drawings complement this novel perfectly. Thomson illustrated the works of many popular author's such as Austen, Dickens and J M Barrie. Thomson's illustrations to 'Cranford' led to his increase in popularity and his being commissioned by George Allen and Co to illustrate 'Pride and Prejudice'. 'Cranford' is one of Elizabeth Gaskell's best known novels. It was originally issued in Charles Dickens' popular magazine 'Household Words'. The work is a series of satirical sketches portraying small town customs and values in Victorian England. In a lovely Bayntun-Riviere binding, with the binder's stamp to the verso of front endpaper.

A limited edition copy of J. M. Barrie's play 'Quality Street', illustrated with colour plates throughout by Hugh Thomson, signed by the artist. A limited edition work, limited to one thousand copies, this one numbered one-hundred and four. Signed by the artist to the edition page. 'Quality Street' is a play written by J. M. Barrie. The play follows two sisters, Phoebe and Susan, as they start a school for 'genteel children', as they try and get the attention of an old suitor who went away to war. The play was written before Barrie's famous 'Peter Pan', and it opened on Broadway in 1901, with the cast including Seymour Hicks, Ellaline Terriss, Marion Terry, and Irene Rooke. J. M. Barrie is best known for his work 'Peter Pan', who was inspired to write the novel by the Llewelyn Davies boys. His other works, including this play, were popular, but often overshadowed by the success of 'Peter Pan'. With a colour frontispiece, and twenty-one colour plates. Illustrated by Hugh Thomson. Thomson was an Irish illustrator, who did pen-and-ink illustrations for editions of works by Jane Austen, Charles Dickens, and J. M. Barrie. Collated, complete. 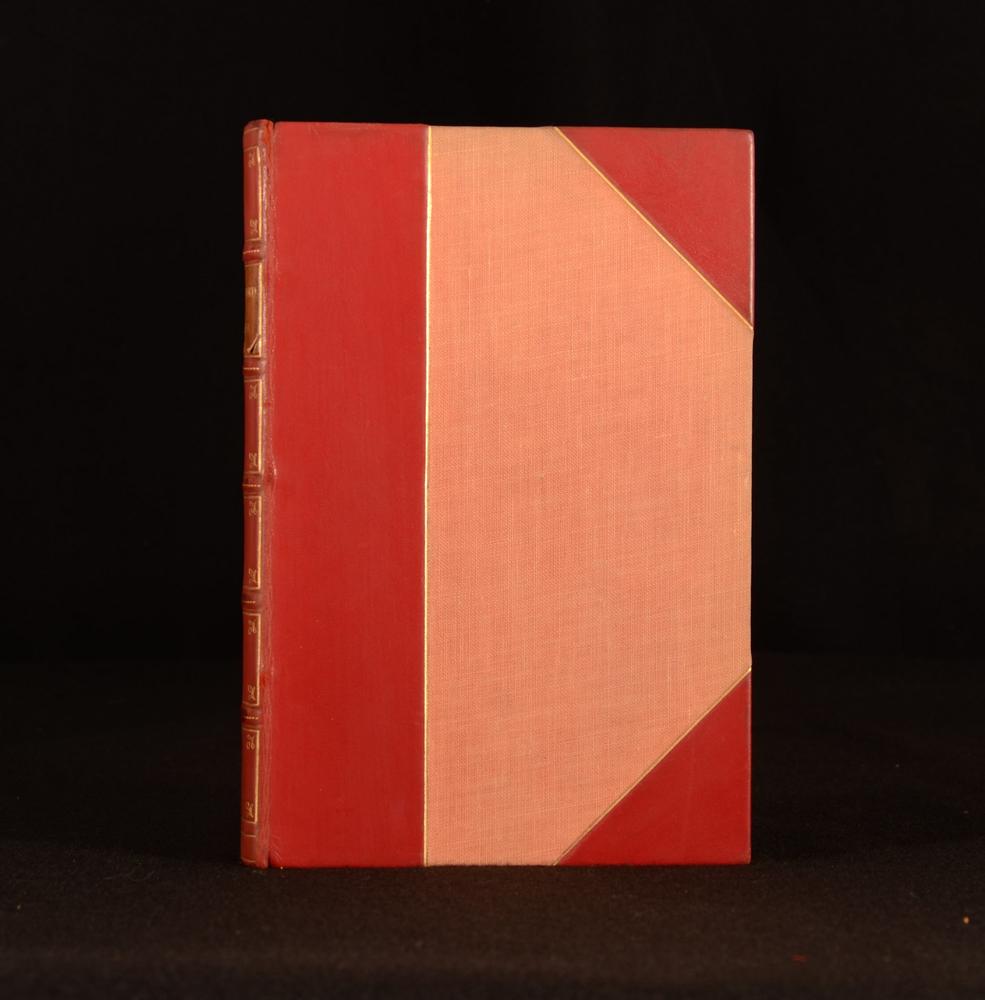 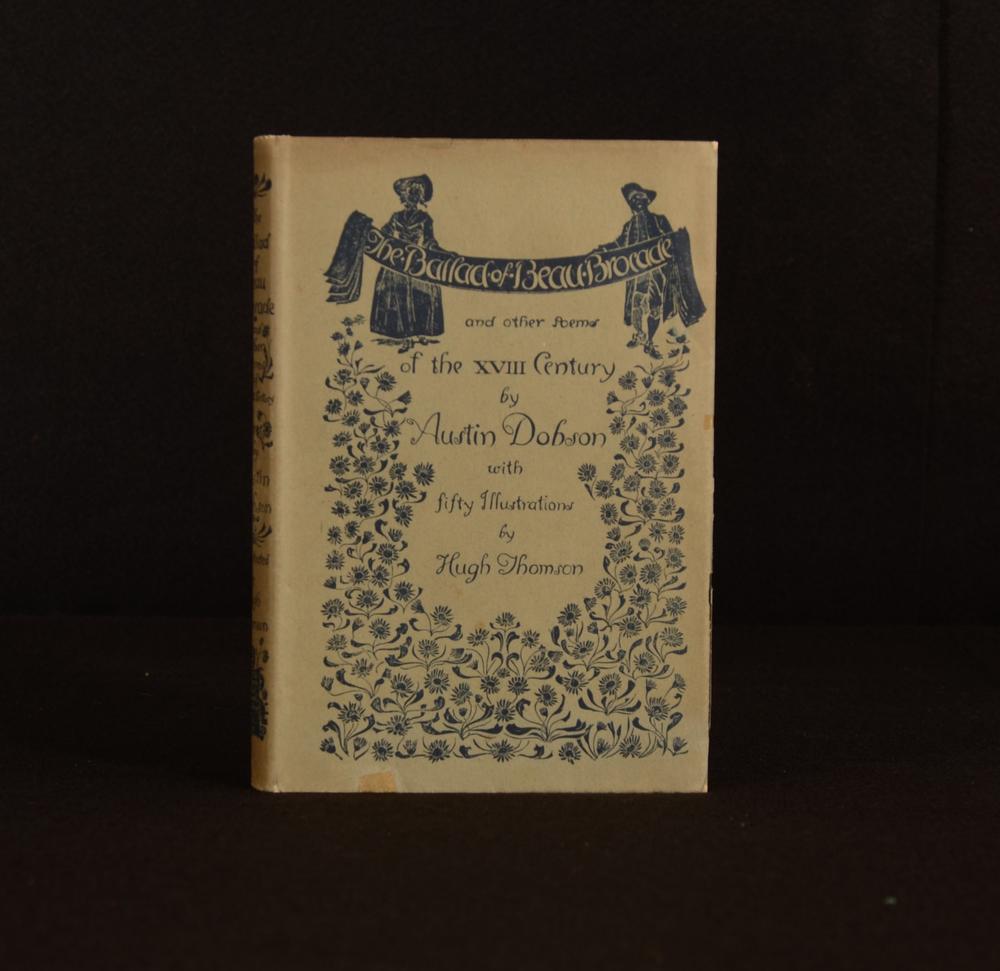 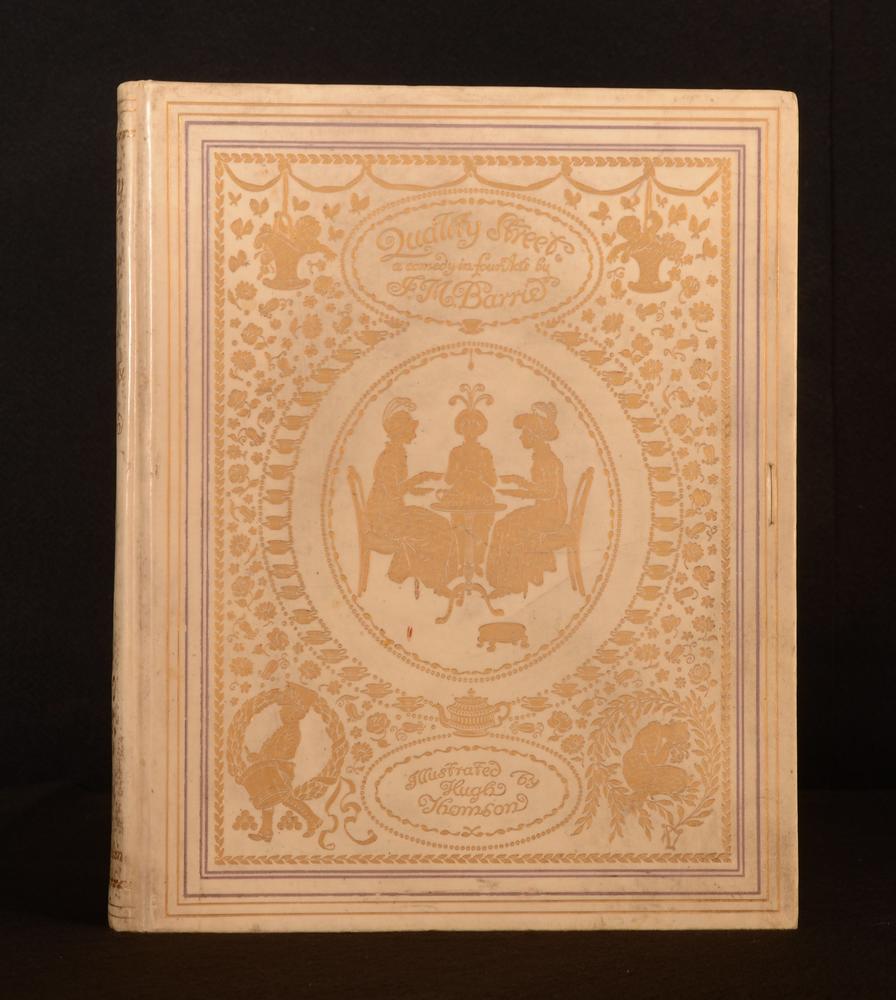 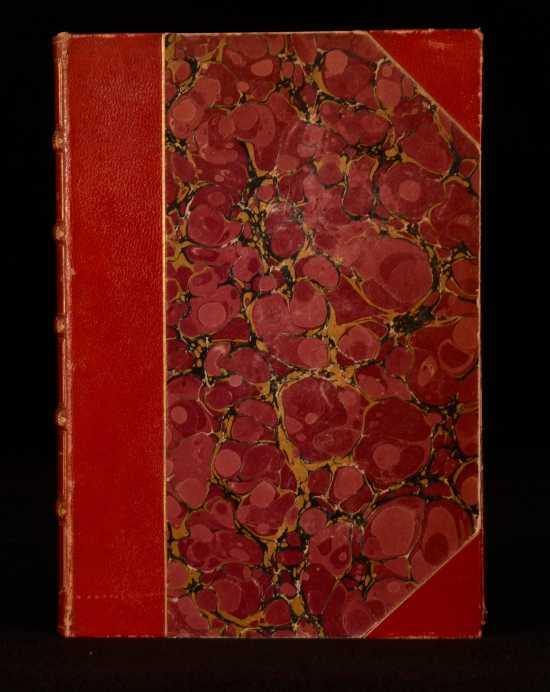