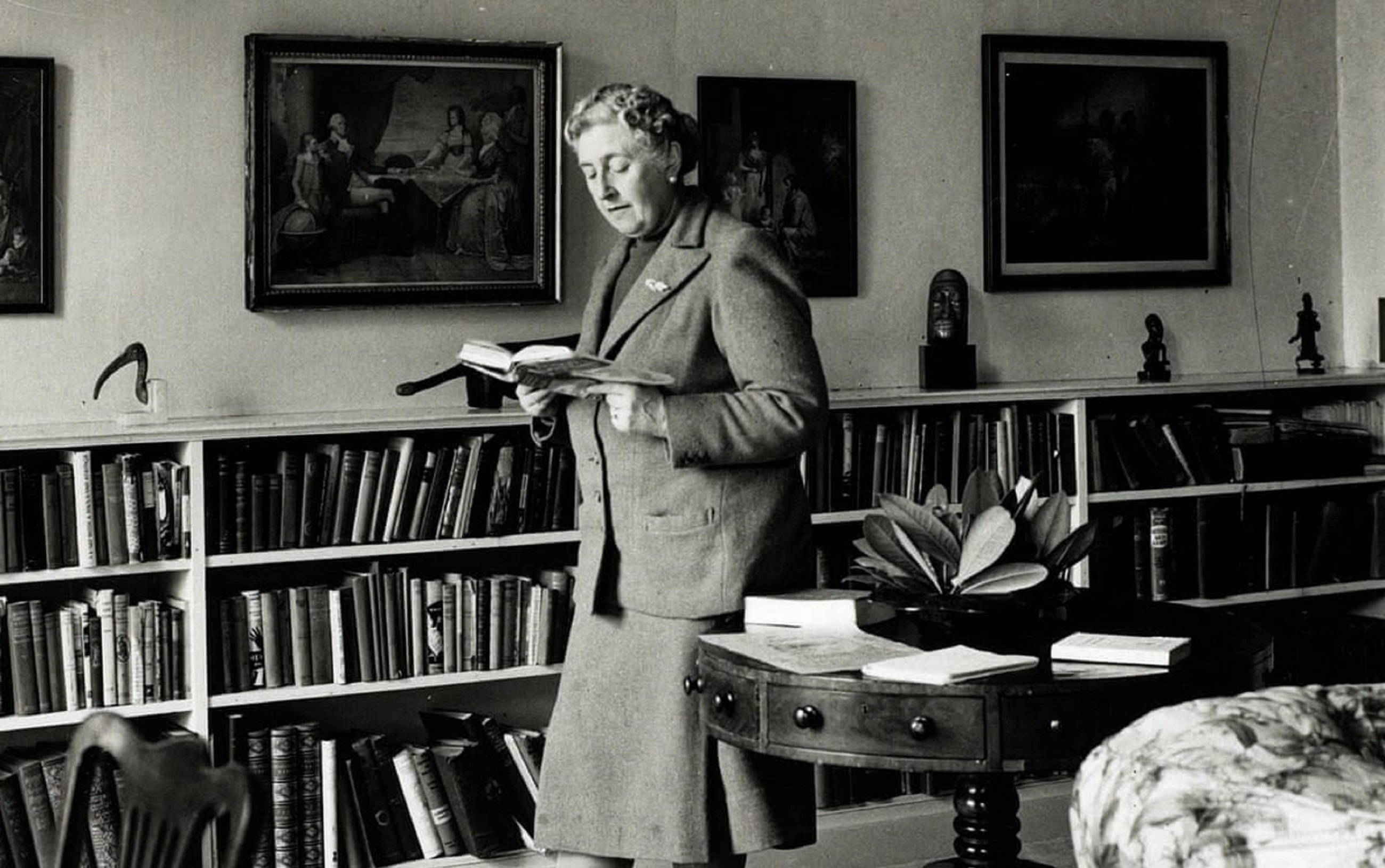 With the weather outside so nippy, our shelves are tempting us to stay in more than ever, and in the long, dark winters, there is nothing quite like curling up with a classic Christie to warm up. Fortunately for you, we've recently acquired the strongest collection of the Queen of Crime's works to ever grace our shelves – as ever with the works of Agatha Christie, we don't expect them to hang around too long, and so here we present a curated collection of the works we currently have on offer. From the very start of her literary life up until the last days of Hercule Poirot, we've got you covered.

The Murder at the Vicarage 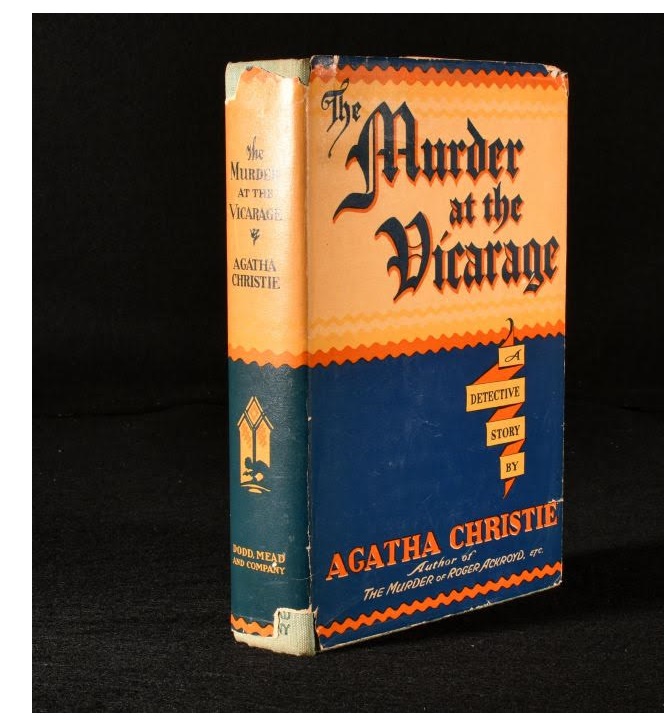 Remarkably, we currently have two very different copies of this increasingly scarce work, the first to feature iconic spinster sleuth Miss Marple. Both first editions published in 1930, the first we have to offer is the first U.S. edition, presented in a beautiful, bright and well-preserved dust wrapper. The second is the first U.K. edition, which has been trimmed down and rebound in a contemporary cloth binding. Both, however, contain the same thrilling story, as Miss Marple undertakes her first mystery, set in her fictional home village of St Mary Mead. When Colonel Lucius Protheroe, an unpopular and wealthy churchwarden, is found shot through the head at his writing desk, it is up to thew wily Miss Marple to determine why...and more importantly, who...! A remarkably popular work, it is exceptionally uncommon for us to acquire one of this work, let alone two. You can see our U.S. edition complete with dust wrapper here, and the U.K. one here.

A Pocket Full of Rye 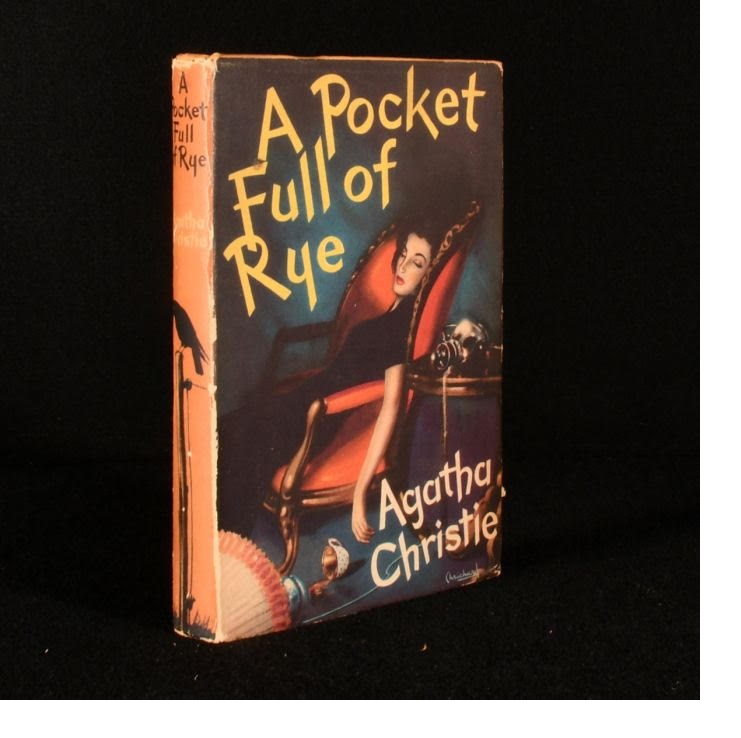 An early edition of this thrilling Marple mystery, printed the year following its initial publication, in 1954. This is presented in an uncommon Thriller Book Club dust wrapper, which is unclipped and exudes Christie's sinister glamour. When an important businessman is poisoned by his routine morning tea, the prime suspect, his wife Adele, is soon found dead by the same means but a different poison, quickly followed by the strangulation of Gladys Martin, the maid. Miss Marple, an old employer of Gladys', reads of the murders in the paper and can't help but put her deft sense to the test... Our copy is in excellent condition, in this uncommon and exciting dust wrapper.


And as for Christie's stand alone works... 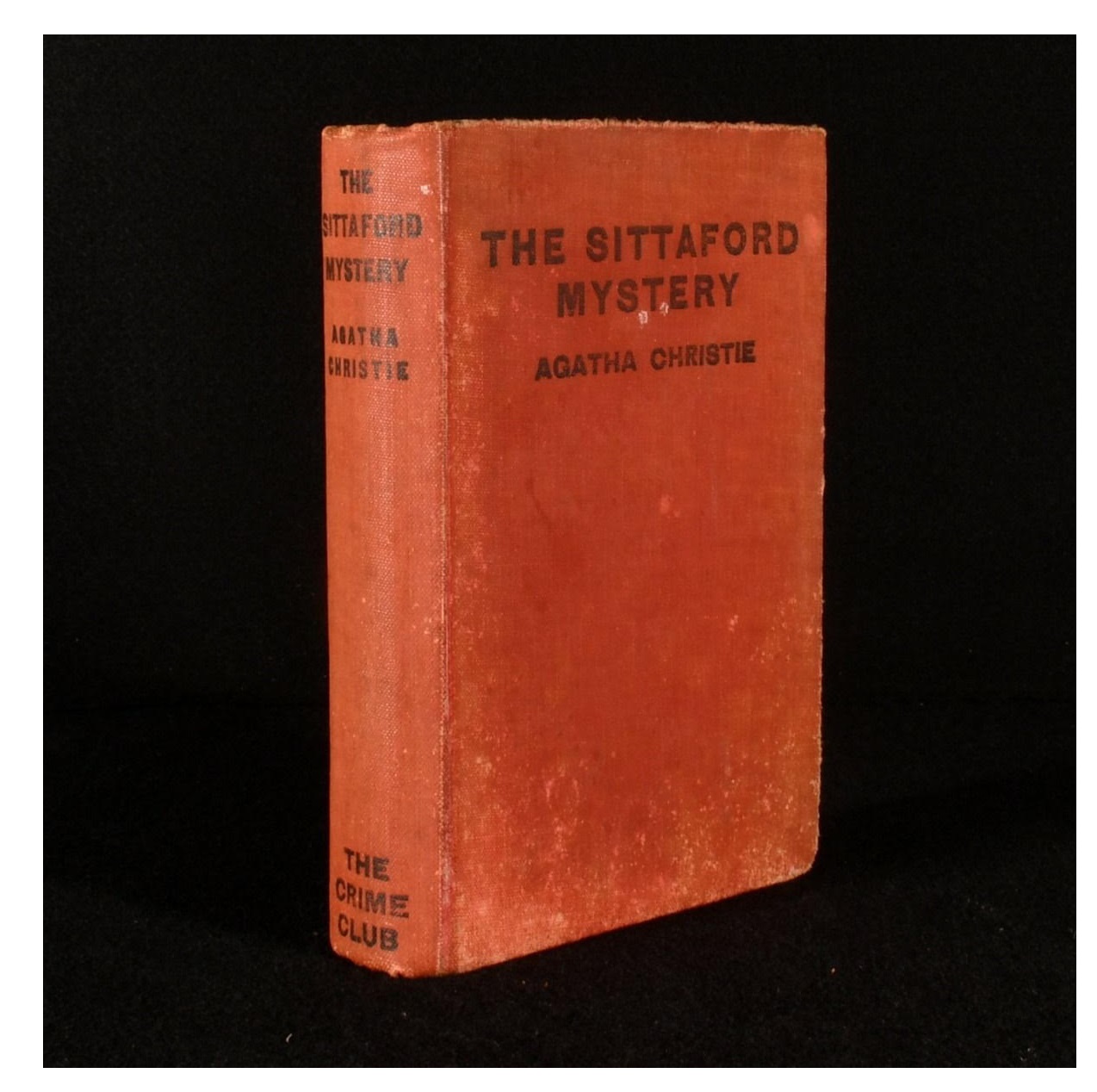 A scarce first edition of this early Christie, known for its allusions to Arthur Conan Doyle's 'The Hounds of the Baskervilles', in particular in its setting of a misty and snowy English moor. Mrs. Willett and her daughter host a seance, which tells them that Captain Trevelyan is dead; Major Burnaby offers to brave the snow on foot to check up on his friend, and when he finds him murdered, the night takes a nasty turn, and it's up to the fiancee of the victim, Emily Trefusis, to get to the bottom of things...Our scarce first edition is bound in the publisher's original cloth and complete with four pages of publisher's advertisements to the rear. 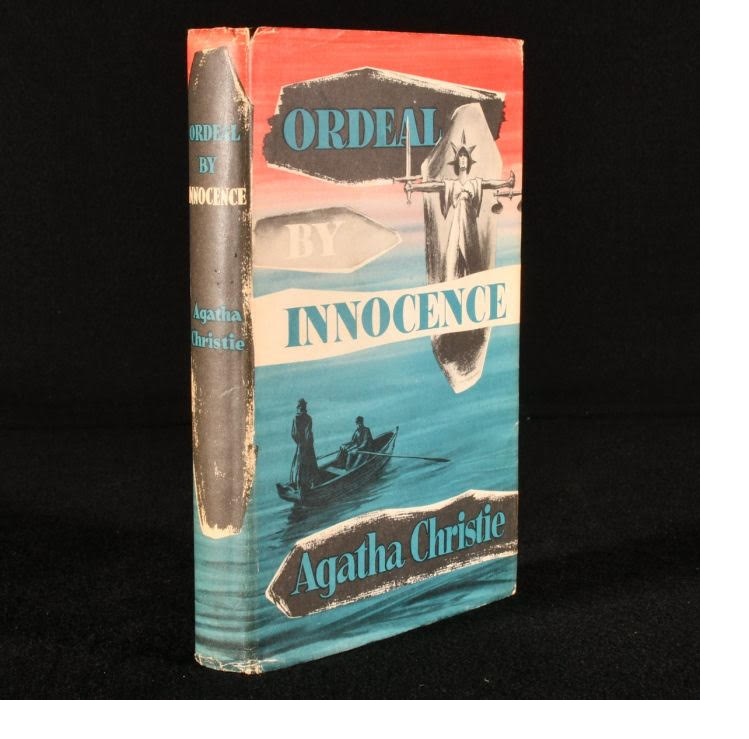 Included in our collection is a smart early reprint of Agatha Christie's 'Ordeal by Innocence', published in 1959 the year following the work's first edition.  When a witness only realises that he has seen something crucial two years after the alleged killer has been found guilty, he must take the families of both the victim and the convicted killer back to the pain they suffered those years ago in order to see justice. Complete with a colourful unclipped dust wrapper, this is a lovely example of this enthralling work.

And finally, for the man we've all been waiting for and those famous little grey cells... here are our favourite Hercule Poirot works.

Murder on the Orient Express 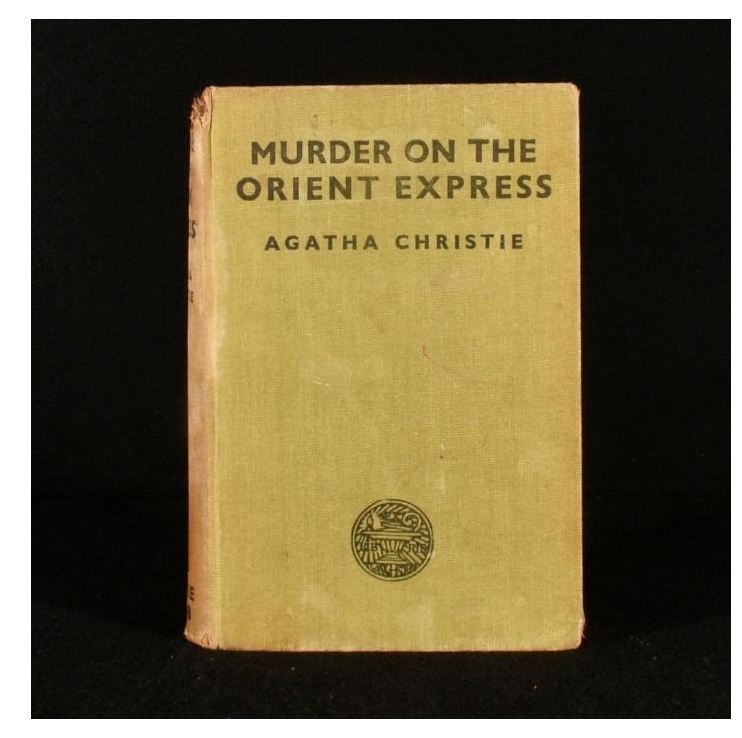 One of, if not the, most well-known work by Christie, we have an extremely scarce variant first edition of 'Murder on the Orient Express', a particularly hard-to-find work in any early edition, let alone the first. Set on the romantic Orient Express, itself an icon of Christie's time, a murder occurs while the train is stationary due to snow; Hercule Poirot's holiday is put on hold and his mind put to the test to discover who is responsible for the American businessman's murder... This is an example of this work we aren't likely to see again, so don't miss out on the chance to own a first edition of such an important whodunnit. 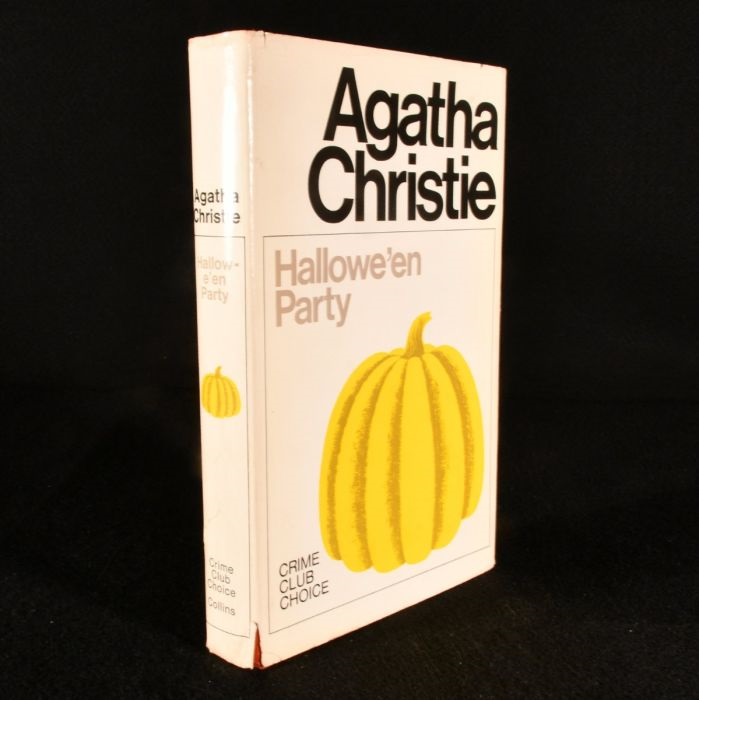 A smart first edition of another popular Poirot work, complete with a bright dust wrapper depicting a pumpkin. This work sees authoress Ariadne Oliver contact Hercule Poirot after a terrible murder at a Hallowe'en party at which she had been at attendance; thirteen year old Joyce Reynolds is found drowned in an apple-bobbing tub, having spent the party claiming that she had once witnessed a murder...Poirot must ascertain the truth behind her words in order to identify her killer. First published in 1969, this is a lovely first edition complete with the unclipped dust wrapper. 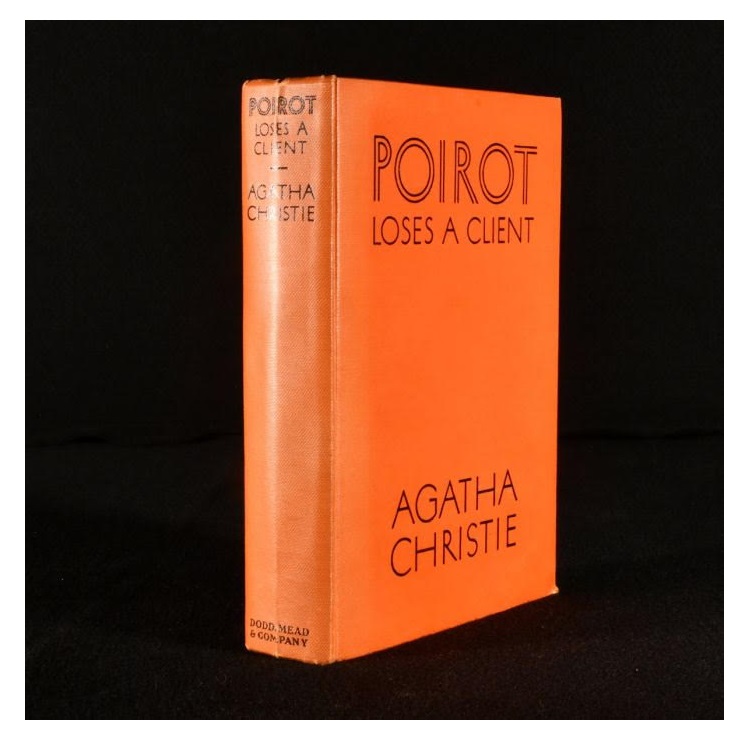 Published in the United Kingdom as 'Dumb Witness', this is the first edition of this work, being the U.S. edition. Narrated by Arthur Hastings, it tell of Poirot receiving a letter from the wealthy spinster Emily Arundell, who is convinced that she has been the victim of attempted murder after a fall at home, whilst her family believe it was an accident caused by her terrier Bob's toy ball. By the time Poirot receives the letter, however, Emily Arundell is dead, it remains to Poirot, and indeed the victim's dog, to discover what has transpired... Ours is a particularly smart first edition of this classic Christie. 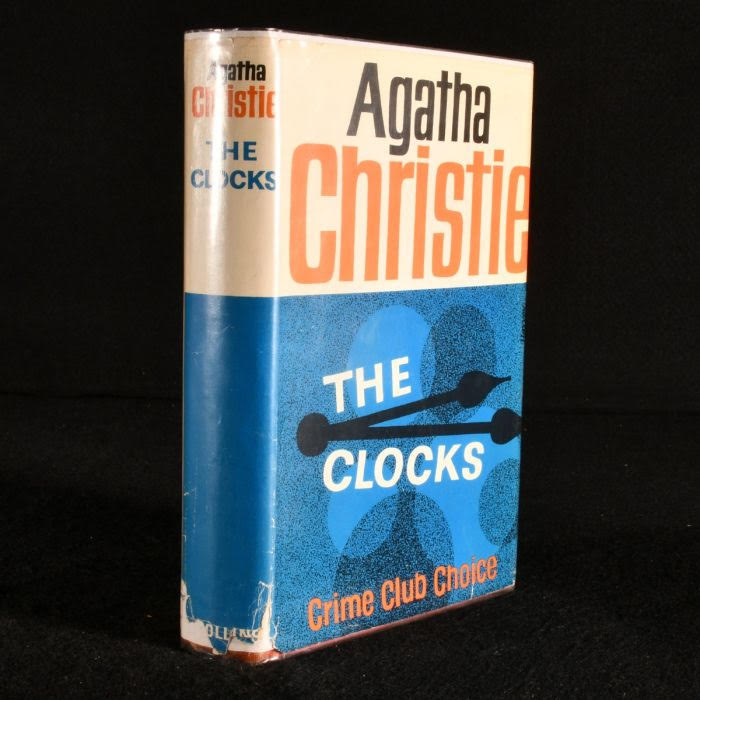 A bright first edition of this unusual Poirot novel, in which Poirot never attends any of the crime scenes, nor does he speak to any of the witnesses or suspects. It comprises two interwoven tales: the story of Poirot working on the mystery from his armchair, as well as a Cold War spy tale told in the first person. This is a delightful first edition of an intriguing work, in which Poirot is required to use his wit alone. 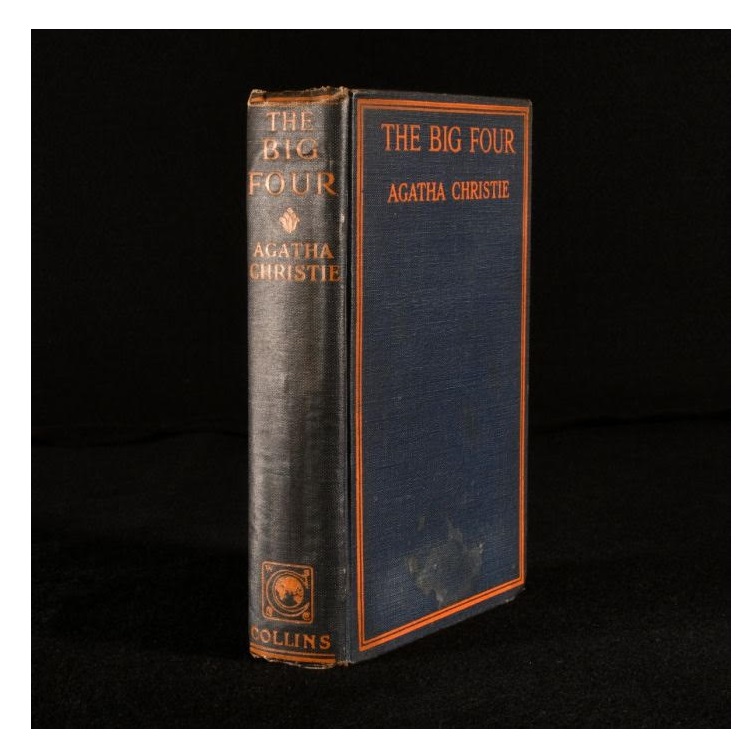 The fourth work to feature Hercule Poirot, following 'The Murder of Roger Ackroyd', this is a wonderful first edition of this thrilling whodunnit also featuring Inspector Japp and Arthur Hastings. It is stylistically unique, as it stemmed from twelve short stories; it is set across various spots in the U.K., as well as Belgium and Italy, making it a rather different Poirot work than the majority, which tend to be set for the most part in one area. It is also an early Christie, written in 1927 and only the seventh novel by Christie.  Ours is a very good example of this exciting early work. 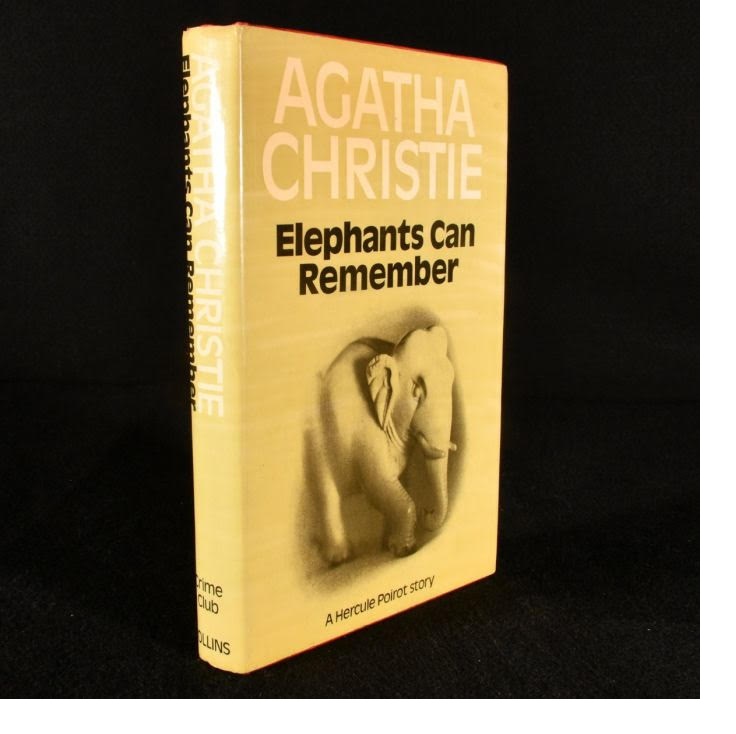 And finally, our 1972 first edition of the final novel written by Agatha Christie to feature Hercule Poirot and Ariadne Oliver, albeit not the final in the Poirot series; it was succeeded by 'Curtain: Poirot's Last Case', which she had written decades earlier.  This work focuses on memory and oral testimonies, following an historic apparent double suicide, requiring Poirot to make enquiries to elderly people twelve years after the incident. Our first edition of the final work penned by Christie featuring Poirot and Oliver is in fine condition, complete with the clipped dust wrapper.

As ever, we'll keep our eyes out for more Christie's so that you might complete your collection and we might enhance our repertoire!