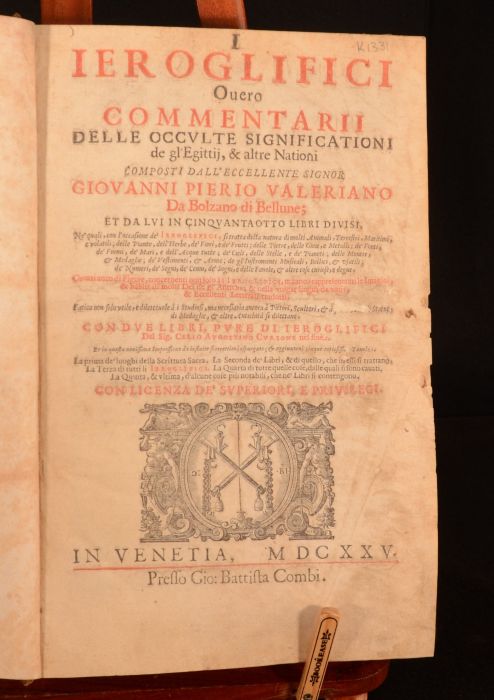 With the signatures: A-G4, H2, A-Z8, Aa-Zz8, Aaa-Ccc8, Ddd6. An early edition of this work, and an unusual imprint. Most early editions of this work on the market are in Latin, whereas this work is in Italian. This is not the first Italian translation, which appeared in 1602, however surviving Italian language translations from this period appear to be of a higher scarcity. Valeriano took inspiration from the culturally important and contemporaneous rediscovery of Horapollo's Hieroglyphics. His tutor, Giorgio Valla produced writings on Horapollo and some consider this work to be a sort of continuation. This work formed the most concise Renaissance dictionary of symbols, which was an area of study that was gathering much interest during that period. Each entry to this work is dedicated to noted Renaissance figures who assisted or inspired Valeriano in his writings. Valeriano mostly discusses natural history through the emblem images with information he procured from Medieval bestiaries and the 'Physiologus'. This work became a useful source for many emblem publications in addition to art and general literature works. Adorned with hundreds of beautiful woodcuts throughout, which each have a textual entry explaining the 'hieroglyph'. Collation unavailable for this uncommon edition, appears complete according to signatures, pagination and catch-words. The title page states that this work has been formed of Valeriano's famed work in addition to hieroglyphic writings by one 'Celio Augostino'. Celio Agostino Curione or Curione Celio Augustino was a sixteenth century historian. He lived from 1538-1567 and was the son of a famed Italian reformer. Agostino's edition of 'Hieroglypica' was first published in 1567 with these two supplementary books. The 1567 edition was the true second edition and therefore only the first edition does not contain Agostino's additions. The supplementary books have many illustrations. The first deals with the Gods and men of ancient Egypt, with the second regarding animals, geometric figures, stones and plants. His aim was to replicate Valeriano's style when producing these two additional books. This work was first published in 1556. Valeriano was a native of Belluno and was the educator of the younger generation of the Medici family, following his assignment by Pope Leo X. This copy has fascinating provenance, as it holds the bookplate of William Stirling of Keir House. It is possible that this is either the bookplate of Sir William Stirling Maxwell or the architect William Stirling II. Sir William Stirling Maxwell was a Scottish historical writer and art historian. The family motto is to the bookplate, which shares a name with the British Thoroughbred racehorse and sire 'Gang Forward'. Gang Forward was bred by one William Stirling Crawfurd who named the horse after the motto of Clan Stirling. He was successful in ten races and was one of the best colts of his generation. A fascinating emblematic work from the Renaissance era, in need of a sympathetic rebinding.

In a full calf binding. Externally, worn. Boards are detached but present. Loss to the spine due to rubbing. Internally, firmly bound. All but the first eight leaves are very bright. Page 571 seems to be closely cropped, with the edge of the image lacking. It is not evident anywhere else in the text that this work has been closely cropped. Chips to the edges of first five leaves. Title page is slightly soiled with scattered spotting. Closed tear to A2, not affecting the text. Spotting to the first few pages, otherwise the pages are generally clean with just the odd spots.